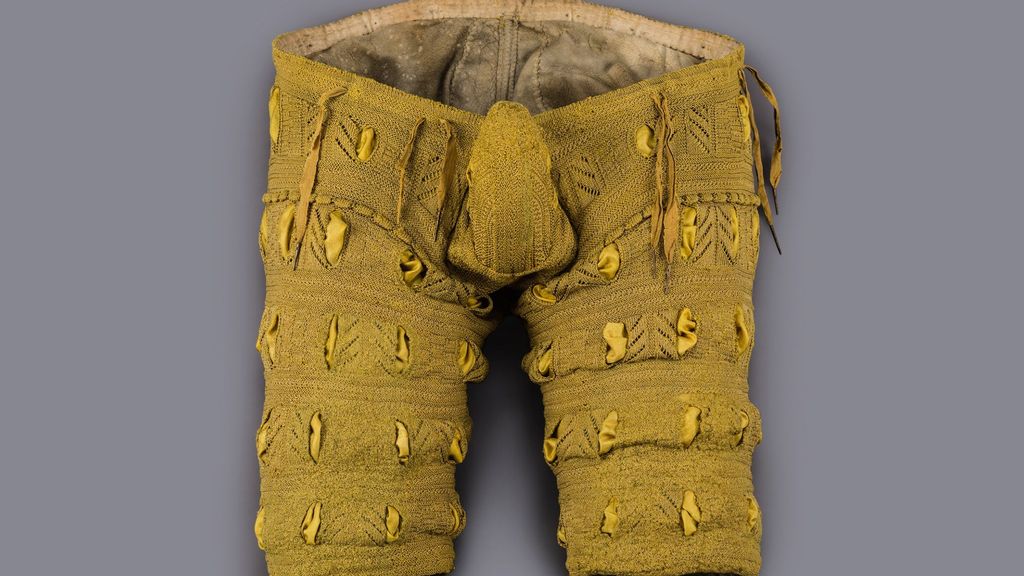 The silk-knitted underpants of Duke August von Sachsen are on display in an exhibit on the Habsburgs that runs until October. (SKD, Jurgen Losel/Zenger News)

A yellow pair of silky men’s underpants with a special pocket knitted in the front showcases the fashion style of the House of Habsburg royals during the Renaissance.

High-class Habsburg clothing, including underwear with a pocket especially knitted for Augustus Elector of Saxony‘s manhood, will be exhibited in the Ambras Castle, part of the Kunsthistorisches Museum in Innsbruck, Austria.

Augustus was the youngest child and third (but second surviving) son of Henry IV, Duke of Saxony, and Catherine of Mecklenburg, who served as Elector of Saxony from 1553 to 1586.

The exhibition, “Fashion Show: Princely Wardrobes of Three Centuries,” will show precious textiles and paintings from the Renaissance to the Baroque.

It opened June 17 and runs through Oct 3.

“This [exhibition] is intended to direct attention to the details,” said Veronika Sandbichler, Ambras Castle director.

The exhibition will showcase 130 paintings and objects from the collection of the Kunsthistorisches Museum in Vienna. “Unfortunately, we only have a modest stock of textiles and no costume collection,” said Sandbichler. “Fashion is much more than just clothing, but rather an expression of power. It is also used for representational purposes.”

A selection of paintings by renowned artists from Giuseppe Arcimboldo to Diego Velázquez will be at the center of the exhibition. “Portraits in which personalities of standing had themselves depicted in expensive clothing give us today insightful information about the original condition of these wardrobes,” the exhibit’s program notes.

Clothing is often fragile, but key pieces have been preserved, such as the bridal robe of Duke August of Saxony from 1548, a doublet from 1555 and a velvet cloak from 1560. Headdresses and shoes, accompanied by accessories such as collars, gloves, fans and exquisite jewelry, showcase wealth and position. The exhibition also includes pieces loaned by international museums.

Despite all its historical features, show backers say the exhibit is highly relevant to current trends. “We also wanted to show what influence fashion has on society today,” said Stefan Zeisle of the curatorial team.