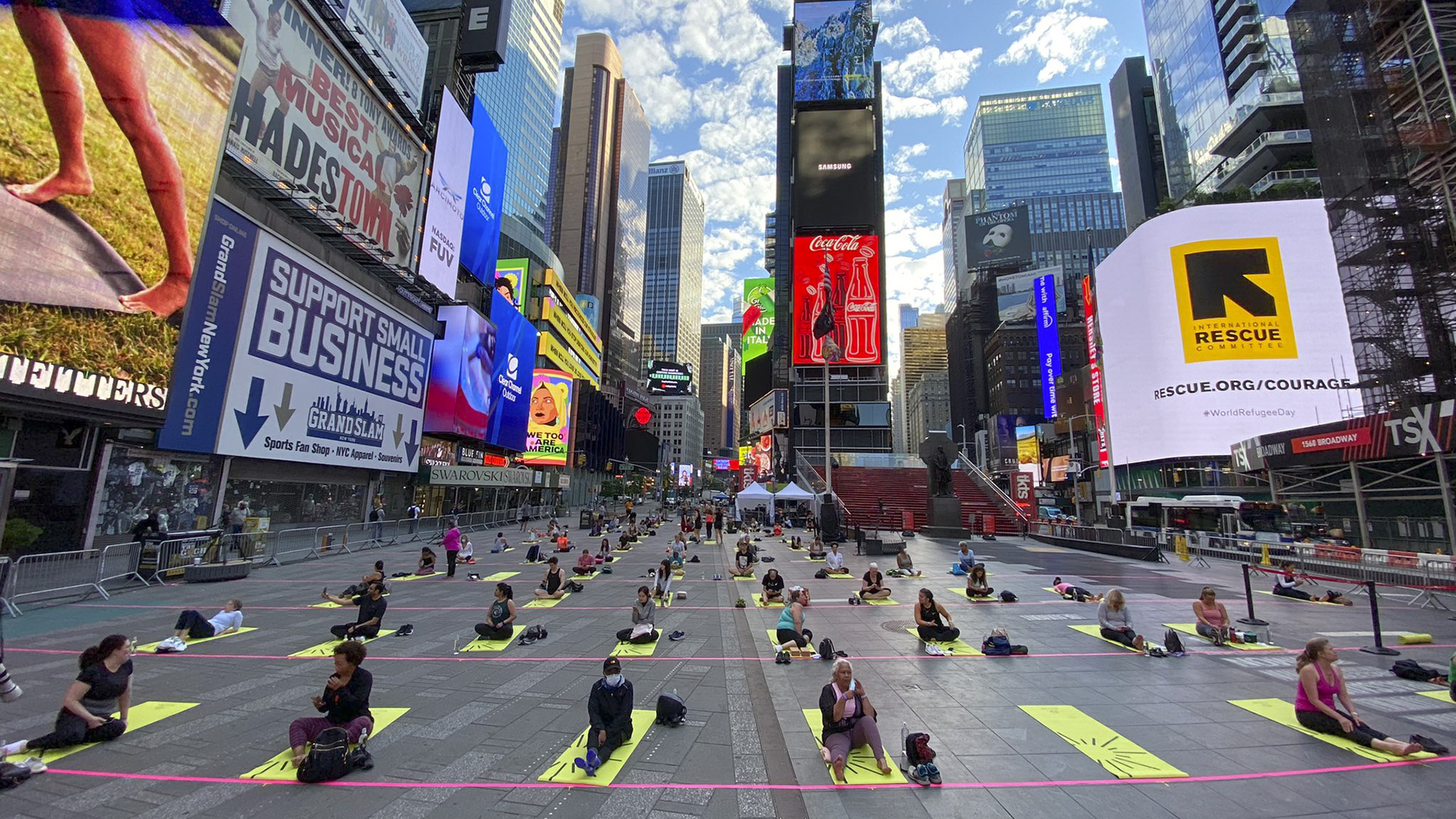 More than 3,000 people attended the seventh edition of the day-long yoga festival at the Times Square. (Times Square @TimesSquareNYC/Twitter)

NEW YORK — More than 3,000 people attended the seventh edition of the day-long yoga festival, titled ‘Solstice in Times Square 2021‘, where yogis filled the iconic Times Square with their yoga mats to mark the beginning of summer.

“As we celebrate yoga at the iconic Times Square — at the crossroads of the world, let us remind ourselves of the truly global embrace of yoga,” said Jaiswal.

“Yoga was born in India but is part of global heritage today. Yoga is about health, well-being, and living in harmony with nature. Yoga is a way of life, and we must try to practice it in its entirety for a peaceful society and a greener planet.”

“It was an incredible experience leading yoga, pranayama, and meditation at Times Square,” said Ruchika Lal, who participated in the event.

“Seeing thousands of yogis experience stillness amidst the chaos of the city never stops.”

In keeping with this year’s global theme — Yoga for Wellness — as coined by the United Nations (UN), the event showcased holistic health, Ayurvedic, and nature-based wellness products from Tribes India and other Indian companies. The stalls attracted numerous visitors eager to learn about the uniqueness of the Indian Tribal, Ayurvedic, and natural products.

“I am satisfied that today experts from all over the world are working on this aspect of yoga.”

Modi launched the m-Yoga application to promote Yoga all over the world. It is developed by the World Health Organization in collaboration with the AYUSH Ministry, the nodal ministry for International Day of Yoga.

The application includes yoga training videos in various languages for people worldwide to participate in the healing exercise of yoga. The app has been launched as part of the World Health Organization’s motto, ‘One World, One Health.’

“Yoga shows us the way from stress to strength and from negativity to creativity,” tweeted Modi. “M-Yoga App is an effort to popularize yoga further. It will also help realize our collective vision of ‘One World, One Health.’”

The day-long yoga celebration offered experienced yogis and first-timers alike the chance to bring a yoga mat to the iconic public space and participate in a free yoga class. In addition, the Consulate General handed a bag of products and some wellness products produced in India as well.

“I love to practice Yoga at Times Square every year on Solstice. So, I want to thank the Consulate for this gift,” a participant said.

The International Day of Yoga was also celebrated in New Jersey today at the Liberty State Park with the Statue of Liberty in the background. This was a community-led event anchored by the Federation of Indian Associations. Famous yoga instructor Thara Natalie led the yoga session.