He saved his own life, and now he's dedicated to saving others.
By Ali McCadden June 21, 2021
Facebook
Twitter
Linkedin
Email 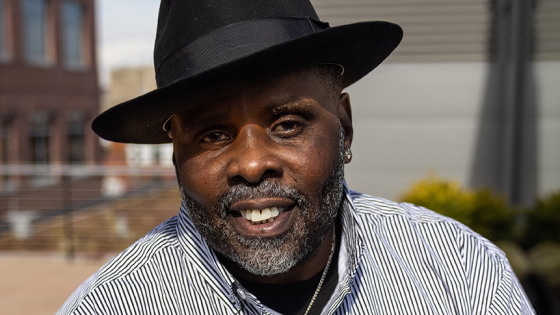 Mark Spence of the My Recovery DC initiative, which works to help residents of the District find a path to recovery. (My Recovery DC)

Throughout his 29 years at St. Martin of Tours Catholic Church in northwest Washington, D.C., when the Rev. Michael Kelley heard that one of his patrons was struggling with addiction, he often told them to call Mark Spence.

Known to leave his house late at night to meet with people with addictions, or get them into treatment facilities within 24 hours, Spence has spent his 32 years of sobriety being a mentor to others.

“He’s like an angel in doing that because a lot of these people would be dead otherwise,” Kelley said.

Now Spence is working with the public education campaign My Recovery DC as a certified peer to encourage residents of the nation’s capital to find their own path to recovery. The initiative is part of the city’s Live. Long. DC program to combat opioid, alcohol and drug abuse. Washington’s fatal opioid overdoses reached peak levels in 2020, with 94 percent involving fentanyl, according to the organization.

Fentanyl is killing people the first time they use it, Spence said. “That’s why the initiative is so important, because we’re trying to save people’s lives.”

But before Spence could focus on saving other people’s lives, he first had to save his own.

Spence grew up attending Catholic schools. He got good grades, had perfect attendance and never smoked or drank in high school. He graduated 12th in his class with a scholarship to play Division II basketball. But by his sophomore year of college, Spence said, he became a person he didn’t know.

“I was all one way, it was all about doing the right thing and I didn’t have balance,” Spence said of his early years. “So when I started drinking, and I liked it, I just embraced all of it.”

Spence said his determination and consistency carried him through to graduation. He was the first in his family to earn a four-year degree, the only African American in his graduating class, and the 16th African American graduate in Wheeling Jesuit College history.

“At the end of the day I graduated, and I was just a different person,” Spence said. “I had a degree in banking and finance, but I also had a full-fledged addiction to alcohol, drugs and nightlife.”

Five years later, Spence was selling drugs and smoking cocaine. He was working three job, but not making enough to support his addiction. In December 1988, his downward spiral culminated in a five-day binge. He was $30,000 in debt, parked in an alley with no money and no substances left when he finally walked to his mother’s apartment and admitted he needed help.

Fortunately, Spence was able to check into a treatment center the next day. By listening to others’ recovery stories during his first Narcotics Anonymous and Alcoholics Anonymous meetings, he realized there was a way out for him, too.

“It became like a competition for me,” he said. “Once I started to find myself and started believing in myself again, I was like, ‘Man I can do this. I’m fighting for my life.’”

During recovery, Spence learned that he needed to change his surroundings and live around people who were also going through recovery. When he learned about different housing programs, he decided on an Oxford House.

With no supervisors or paid staff, Oxford Houses are democratically run by the people who live there, allowing for more freedom and responsibility compared with traditional halfway houses. Each person pays rent, which is split evenly among the tenants. There is no time limit on a person’s stay, but the members will vote tenants out if they break their sobriety.

When Spence first interviewed to live in an Oxford House, there were only about a dozen. Now, there are over 3,000 houses in 49 states and six countries. Spence was a significant contributor to the organization’s growth.

After federal legislation in 1988 allowed Oxford House to open homes across the country, Spence became the organization’s first national spokesperson. With about a year of sobriety under his belt, he drove around the country opening up Oxford Houses and spreading their mission. ‘

He told his recovery story during a “60 Minutes” segment on Oxford House in 1991, which increased public interest in the organization.

Since then, he has told his story at Oxford House world conventions and has continued to mentor people struggling with addictions. In addition, Spence has been happily married to his wife, Kathy, for 24 years. Their son, Cam, graduated from the University of Maryland this year.

Given all that, Spence said he wakes up every day with a sense of purpose.

“I love what I do. I wake up excited about what the day brings me, who I can help today,” he said.

Clayton Mills, Spence’s cousin, told Zenger News that Spence was born to be a mentor to others. He said that My Recovery DC could not have found a better person for its campaign.

“Mark is a person that wants to help other people,” Mills said. “As long as you are trying to help yourself, he will bend over backward to help you and not make you feel belittled while he’s doing it.”