An artist teamed up with the Josh Gibson Foundation to promote a Negro League star whose color kept him out of the majors.
By Mark Gray June 21, 2021
Facebook
Twitter
Linkedin
Email 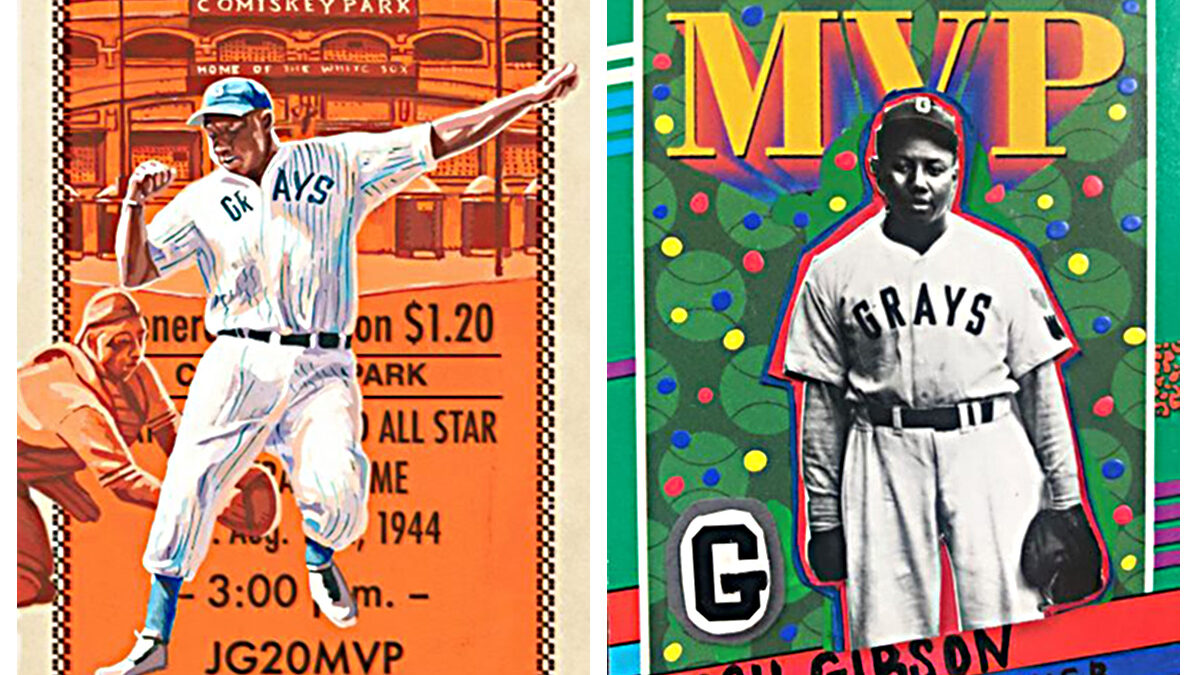 An artist who collects baseball cards is promoting the cause of long-neglected Negro League players by selling one-of-a-kind baseball cards created by a group of artists featuring legends like Josh Gibson who was denied a place in the big leagues because he was black.(Artist (left): Tom Borowski, Artist (right) Mike Smith)

A baseball card collector is making cards in the likenesses of famous but underappreciated Negro League players, and hopes Major League Baseball renames its Most Valuable Player trophies after a legend whose skin color kept him out of the big leagues.

Jason Schwartz is a lifelong baseball fan and card collector who had to be socially distant from the game he loves during the 2020 pandemic. He turned his free time into a professional art workshop to bring a new generation of fans to his hobby.

Schwartz, the founder of Chicago-based Heavy J Studios, is helping resurrect the interest in baseball trading cards, which has been declining in popularity.

The focus of Schwartz’s effort is a collaboration with the Josh Gibson Foundation and the Reviving Baseball In Inner Cities program to pay tribute to the historic minority leagues that have mostly marginalized until now. Part of that effort involves creating custom baseball cards in honor of Negro League players.

Schwartz grew up a Los Angeles Dodgers fan. During the height of the COVID-19 pandemic, and before the league started its truncated 60-game schedule last year, Schwartz went into his personal card collection for solace and to ease his boredom. That downtime led to the discovery that the cards he had been collecting as an investment didn’t appreciate in value the way he hoped — but he couldn’t throw them away.

“A lot of people in my generation held on to our cards and were hoping to cash in on their value to retire,” Schwartz said.  “When we realized that wasn’t happening, you couldn’t throw them away because there was still an emotional connection to them.”

Instead, he turned his passion for the game and its cards into a personal civic call to action.

“In the early stages of the pandemic I was looking for a way to stay sane and to make a difference in the world,” Schwartz said. “I got the idea to create baseball cards as a way to raise money for worthy causes.”

One of the first causes he adopted was with the Pittsburgh-based Gibson Foundation, after meeting Josh Gibson’s great-grandson, Sean. The foundation’s mission statement says it will “carry on the legacy of greatness and accomplishment embodied by Josh Gibson by developing programs that help children of every level of ability reach their potential, and to create opportunities that set his foundation apart from other organizations and provides value for our communities.”

Sean Gibson, the foundation’s executive director, is in the midst of leading the charge for his great-grandfather to be named a Most Valuable Player by Major League Baseball. That move gained added momentum on June 15, when BaseballReference.com — the official statistical tracker of professional baseball in the United States — begin acknowledging the Negro Leagues as Major Leagues.

Schwartz saw his connection to card art and the mission of the Gibson Foundation as the “perfect storm” to help bring more attention to the push for Gibson.

Buoying Gibson’s case is a move by the Baseball Writer’s Association of America to remove the name of former commissioner Kenesaw Mountain Landis from the MVP trophies last season. Landis, who held that post from 1920-44, was a devout activist for keeping the game segregated and is noted for working to prohibit black players from playing in the Major Leagues. Replacement names for the two leagues’ trophies have not yet been chosen, but Josh Gibson is among the candidates.

“This would be important because it’s more than just naming the trophy the Josh Gibson Memorial MVP Award,” Sean said.  “Josh Gibson would carry the names of the 3,400 men who were denied access to Major League Baseball along with it.”

“One of the great things about card collecting has always been about connecting with people,” Schwartz said.  “It helped me make friends when I was a kid, and I’ve met a lot of interesting people while doing card art.”

Schwartz has begun virtually barnstorming to youth baseball organizations in urban communities teaching kids about the history of the game through arts and crafts. He recently held his first virtual card art workshop in Washington, D.C. with youth baseball players from the D.C. Grays RBI program.

During the one-hour session, a small group of players and their families spent quality time making cards using kits provided by Heavy J Studios. Kids use basic arts and craft items, such as construction paper, glitter and glue, to recycle the likenesses that play to a new younger fan base.

“We’re hoping that this will turn into a monthly or bimonthly effort that can help us keep the memories of the Negro Leagues alive,” said Antonio Scott, a member of the board of directors for the DC Grays RBI program. “This might also work as a way for the organization to help raise funds to benefit the league while pushing our education initiative as well.”

Heavy J Studios has also created a card art tournament on Twitter and Instagram. This allows youth baseball players and their families to bond and learn untold stories of the game by creating new images of current MLB players, while also embracing the legacy of the past, Schwartz said.

After kids and adults created their handmade portraits, they post them online, where they compete for social-media votes designed to create a winner in a nationwide virtual contest.

“We set up a tournament similar to [college basketball’s March Madness] where instead of having four teams, we’ve got over 70 card artists,” Schwartz said.  “Hopefully, it will make an impact on the [baseball] writers who are voting on the MVP award.”

«Previous Post
Tokyo Olympics: Maximum Of 10,000 Fans To Be Allowed For Each Sporting Event»Next Post
3 Israeli Designers Do A Stunning Spin On Sustainability