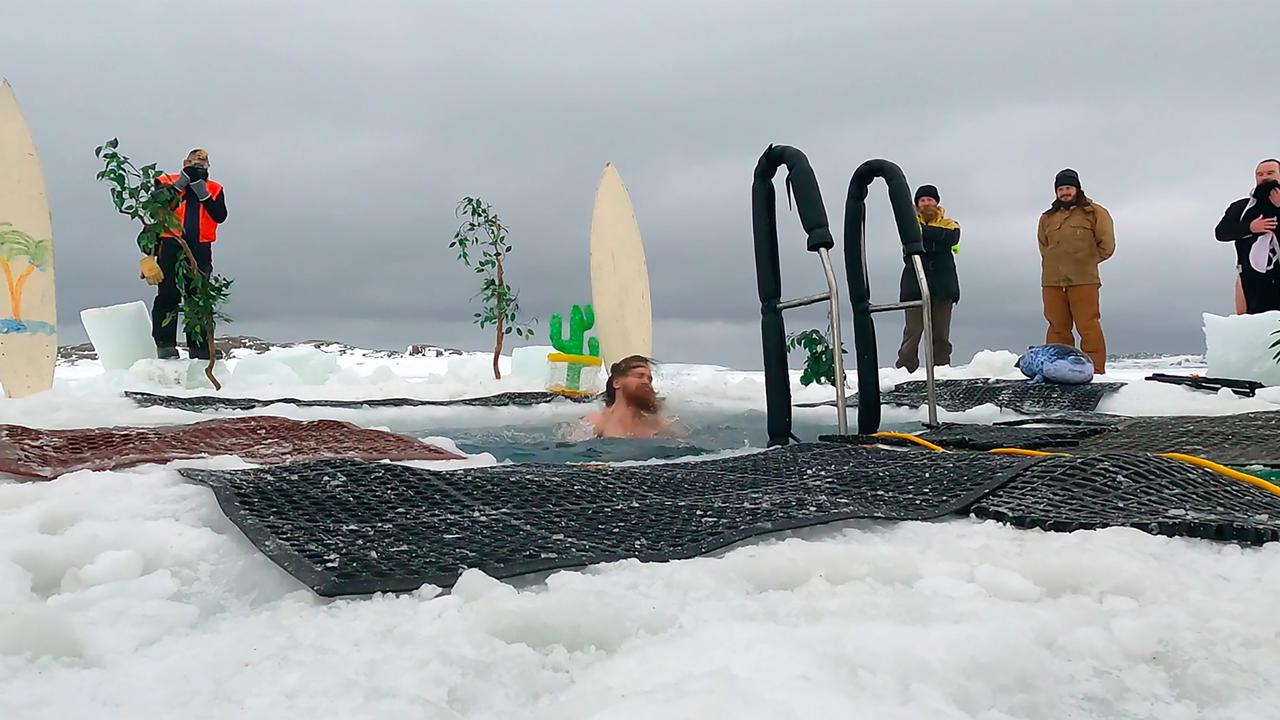 Expeditioners at Casey station cut through thick ice for a plunge to mark the winter solstice. (AAP Image)

Each year, expeditioners at Australia’s three research stations in Antarctica and on sub-Antarctic Macquarie Island celebrate the year’s shortest day and longest night by taking a dip in sea ice or the ocean.

The midwinter custom is a significant milestone for expeditioners, signifying “hump day” during the long and dark winter for the 86 souls spread across the stations.

Casey station leader Kyle Williams said his team had created a 1.5-square meter pool by cutting through the 80-centimeter thick sea ice with chainsaws and crowbars.

“The water temperature proved to be a bracing minus 2C, and the air temperature of minus 9C really got us moving,” he said after the event, held before Monday’s winter solstice.

Williams said his 27-person crew was not getting much vitamin D, with the sun only rising above the horizon for two-and-a-half hours a day.

Further south at the Mawson and Davis research stations, expeditioners have not seen a sunrise for several weeks and are living in constant twilight or darkness.

Aside from the medically supervised swims, formal dinners will also be held as part of the next phase of festivities.

Kim Ellis, director of the Australian Antarctic Division, said the Covid-19 pandemic had resulted in dramatic program changes since the last midwinter celebrations.

“We have been resilient and adaptive and kept all our research stations going strong and our expeditioners safe for another year,” Ellis said in a statement on June 21.

“Our people deployed south, and their families are always in our thoughts. Midwinter is an opportunity to have some fun as we reflect on how far we’ve come and what is yet to be achieved.”

The Australian Antarctic Division has tweeted about the event where the expeditioners are talking about their experience in a video.

“Swimming doesn’t usually happen down south, but it’s an important tradition for Australia’s 86 expeditioners on #MidwintersDay. In #Antarctica, the winter solstice is celebrated with a sub-zero plunge in the sea-ice, and on sub-Antarctic Macquarie Is, a dip in the chilly surf,” read the tweet. The video currently has 4.5K views.