Footprints from the very last dinosaurs to walk on the U.K. soil 110 million years ago have been found in Kent. 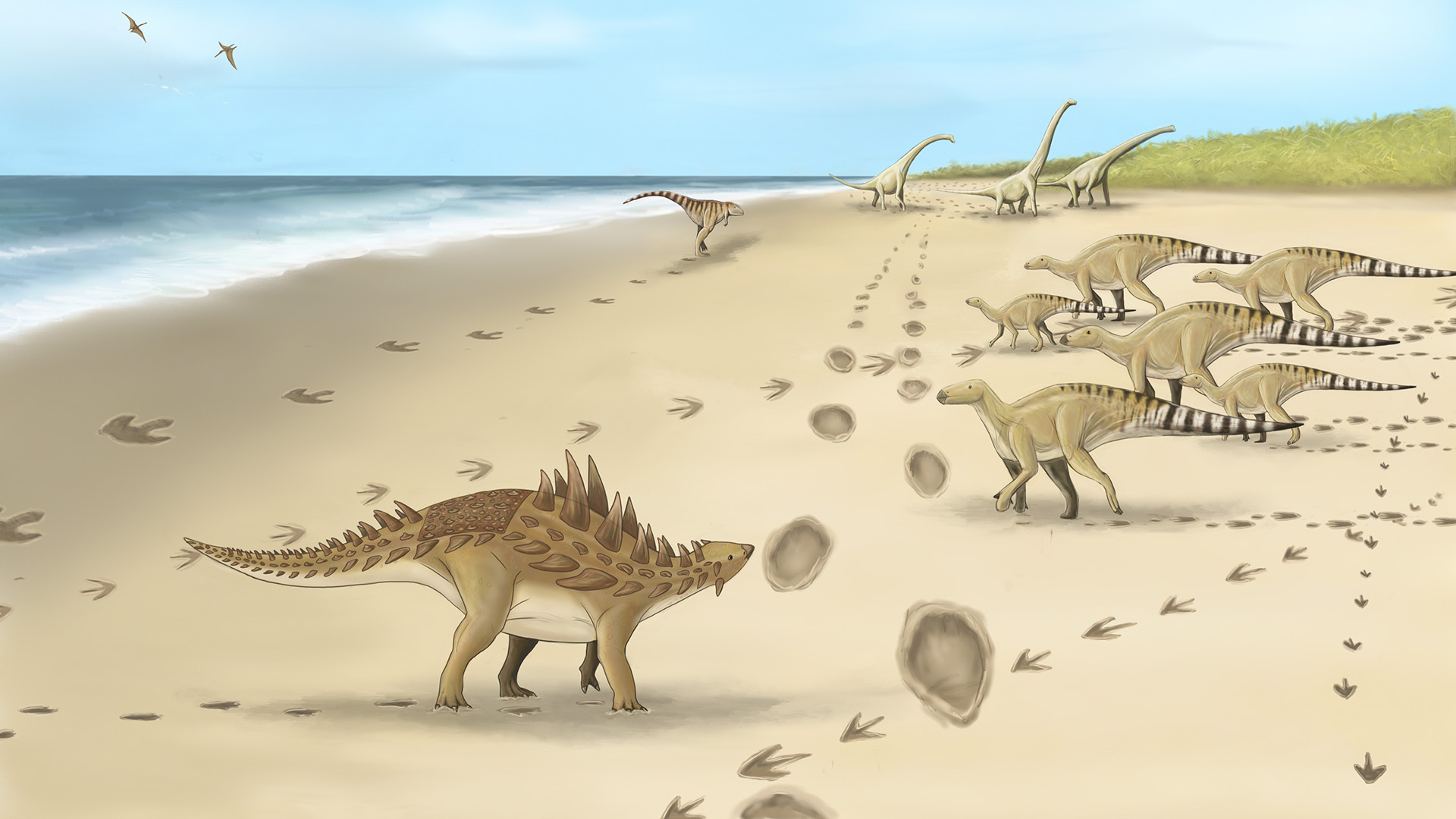 The footprints were discovered in the cliffs and on the foreshore in Folkestone, Kent, where stormy conditions affect the cliff and coastal waters and constantly reveal new fossils. (Megan Jacobs @MeganJPalaeo/Twitter)

LONDON — Footprints from at least six different species of dinosaurs, the very last ones to walk on the U.K. soil 110 million years ago, have been found in Kent, a new report has announced.

The discovery of dinosaur footprints by a curator from Hastings Museum and Art Gallery and a scientist from the University of Portsmouth is the last record of dinosaurs in Britain.

The footprints were discovered in the cliffs and on the foreshore in Folkestone, Kent, where stormy conditions affect the cliff and coastal waters and constantly reveal new fossils.

“This is the first time dinosaur footprints have been found in strata known as the ‘Folkestone Formation,’ and it’s quite an extraordinary discovery because these dinosaurs would have been the last to roam in this country before becoming extinct,” said David Martill, Professor of Palaeobiology.

“They were walking around close to where the White Cliffs of Dover are now — next time you’re on a ferry, and you see those magnificent cliffs, just imagine that!”

The footprint fossils formed by sediment filling the impression left behind when a dinosaur’s foot pushes into the ground is preserved.

The footprints are from various dinosaurs, which shows a relatively high diversity of dinosaurs in southern England at the end of the Early Cretaceous period, 110 million years ago.

They are thought to be from ankylosaurs, rugged-looking armored dinosaurs like living tanks; theropods, three-toed flesh-eating dinosaurs like the Tyrannosaurus Rex; and ornithopods, plant-eating hipped bird dinosaurs so-called because of their pelvic structure being a little similar to birds.

Philip Hadland, Collections and Engagement Curator at the Hastings Museum and Art Gallery, is the lead author on the paper.

“Back in 2011, I came across unusual impressions in the rock formation at Folkestone. They seemed to be repeating, and all I could think was they might be footprints,” Hadland said.

“This was at odds with what most geologists say about the rocks here, but I went looking for more footprints, and as the tides revealed more by erosion, I found even better ones. More work was needed to convince the scientific community of their validity, so I teamed up with experts at the University of Portsmouth to verify what I’d found.”

Most of the findings are isolated footprints, but one discovery comprises six imprints — making a “trackway,” which is more than one consecutive print from the same animal.

This trackway of prints is similar in size to an elephant footprint. It is identified to be Ornithopodichnus, of which similar but smaller-sized footprints have also been found in China from the same period.

The most significant footprint found — measuring 80 cm in width and 65 cm in length — has been identified as belonging to an Iguanodon-like dinosaur. Iguanodons were also plant-eaters, grew up to 10 meters long, and walked on both legs or all fours.

“To find such an array of species in one place is fascinating. These dinosaurs probably took advantage of the tidal exposures on coastal foreshores, perhaps foraging for food or taking advantage of clear migration routes,” said Martill.

In the Late Cretaceous period, part of Kent, and indeed much of the United Kingdom, was beneath a shallow sea. Still, this study also shows unequivocally that the Folkestone Formation was inter-tidal.

“Aside from finding that dinosaurs went to the seaside just like their modern relatives, the birds, we have also found new evidence that changes the interpretation of the geology of the Folkestone Formation strata,” said Martill.

“It just goes to show that what has been previously published about the geology of an area isn’t always correct, and new insights can be made. There is also the potential for almost anyone to make a discovery that adds to scientific knowledge from publicly accessible geological sites.”