Covid-19 patients suffered from these problems even after two months of being discharged from the hospital.
By Zenger News Desk June 21, 2021
Facebook
Twitter
Linkedin
Email 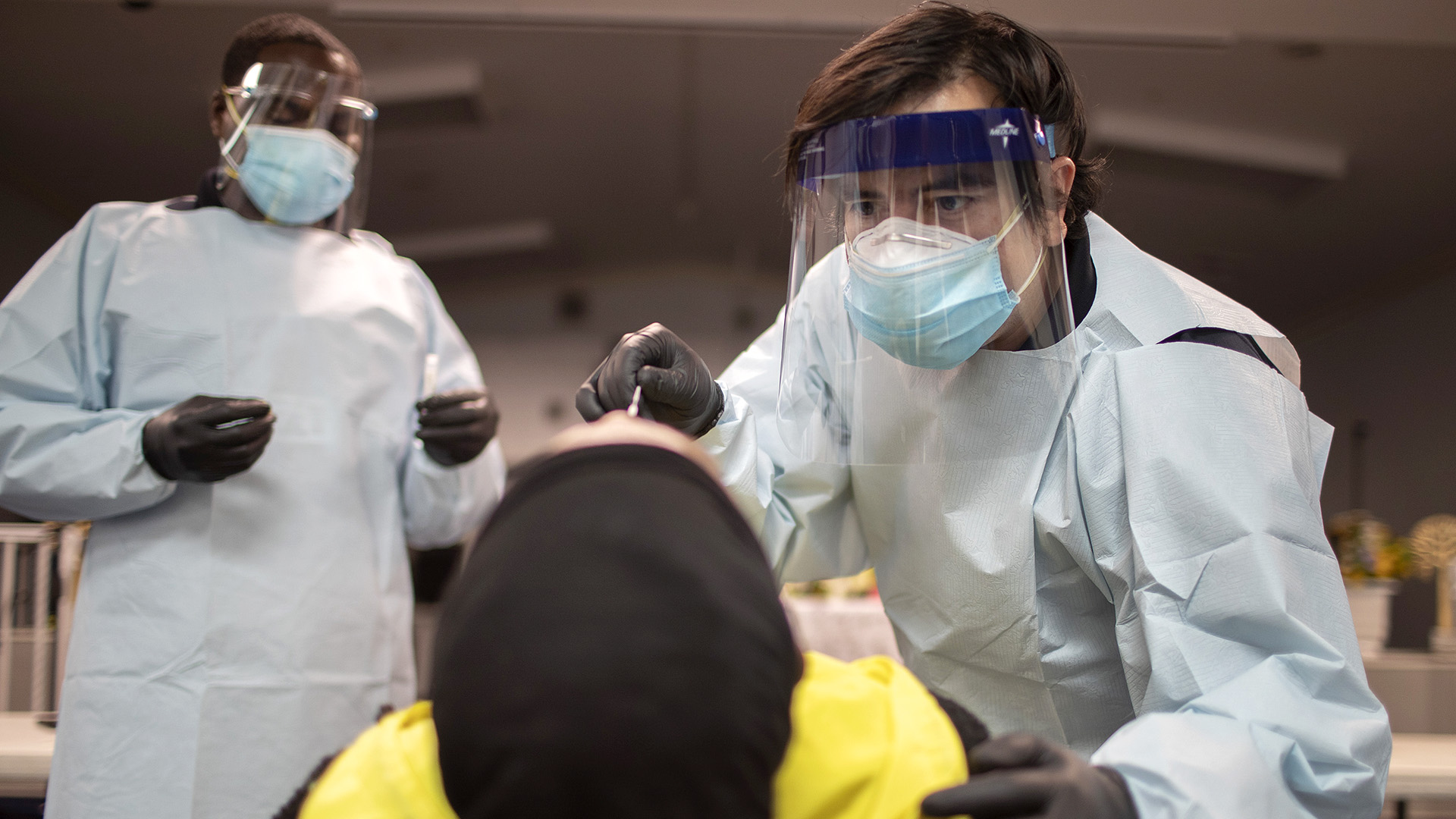 Healthcare workers use a nasal swab to test a person for Covid-19 at a pop up testing site at the Koinonia Worship Center and Village in Pembroke Park, Florida. (Joe Raedle/Getty Images)

VIENNA, Austria — Covid-19 patients suffer from cognitive and behavioral problems two months after being discharged from hospital, a new study presented at the 7th Congress of the European Academy of Neurology (EAN) has found.

Issues with memory, spatial awareness, and information processing problems were identified as possible overhangs from the virus in post-Covid-19 patients who were followed up within eight weeks.

Cognitive and psychopathological problems were much worse in younger people, with most patients aged under 50 demonstrating issues with executive functions.

The greater severity of Covid-19 acute respiratory symptoms during hospital admission was associated with low executive function performance in the whole sample.

Additionally, longitudinal observation of the same cohort at ten months from Covid-19 showed reduced cognitive disturbances from 53 to 36 percent but a persisting presence of PTSD and depressive symptoms.

The lead author of the study, Massimo Filippi, from the Scientific Institute and University Vita-Salute San Raffaele, Milan, Italy, said: “Our study has confirmed significant cognitive and behavioral problems are associated with Covid-19 and persist several months after remission of the disease.”

“A particularly alarming finding is the changes to executive function we found, which can make it difficult for people to concentrate, plan, think flexibly and remember things. These symptoms affected three in 4 younger patients who were of working age”.

No significant relationship was observed between cognitive performance and brain volume within the study.

“Larger studies and longer-term follow-up are both needed, but this study suggests that Covid-19 is associated with significant cognitive and psychopathological problems,” said Canu, first author of the study and researcher at the San Raffaele Hospital of Milan.

“Appropriate follow-up and treatments are crucial to ensure these previously hospitalized patients are given adequate support to help to alleviate these symptoms.”

The study is one of four scientific presentations on the neurological symptoms of Covid-19, an area of research that is fast emerging from this week’s EAN Congress.

Research, led by Dr. Mattia Pozzato of the Ospedale Maggiore Policlinico in Milan, found 77.4 percent of 53 patients reported developing at least one neurological symptom, and 46.3 percent presented with more than three neurological symptoms 5-10 months after being hospitalized with Covid-19.

The most common symptoms were insomnia (65.9 percent), daytime sleepiness (46.3 percent), and walking difficulties. Other less frequent symptoms included headaches, hyposmia (a reduced ability to smell), and hypogeusia (loss of taste).

The authors concluded 90 percent of patients had post Covid-19 symptoms and that neurological symptoms form a significant part of these.

A research project presented by Professor Tamara S. Mischenko, Head of the Department of Neurology and Medical Psychology at Karazin University, Ukraine, followed up 42 patients aged 32 to 54 after being hospitalized with Covid-19 after two to four months, finding that 95 percent had neurocognitive impairment symptom.

Another study that looked at brain stem damage in Covid-19 patients from postmortem showed a high percentage of neuronal injury and a higher number of small masses (called corpora amylacea) abundant in neurodegenerative diseases. Immunohistochemistry tests also revealed the presence of the virus in the brain stem.

Measurements were compared with non-Covid-19 intensive care unit patients. The author, Tommaso Bocci, a neurologist and neurophysiologist at the University of Milan’s Department of Neurological Science, said the study provides the first neuropathological, neurophysiological, and clinical evidence of the Covid-19-related brain stem involvement, especially at the medullary level, suggesting a neurogenic component of respiratory failure.