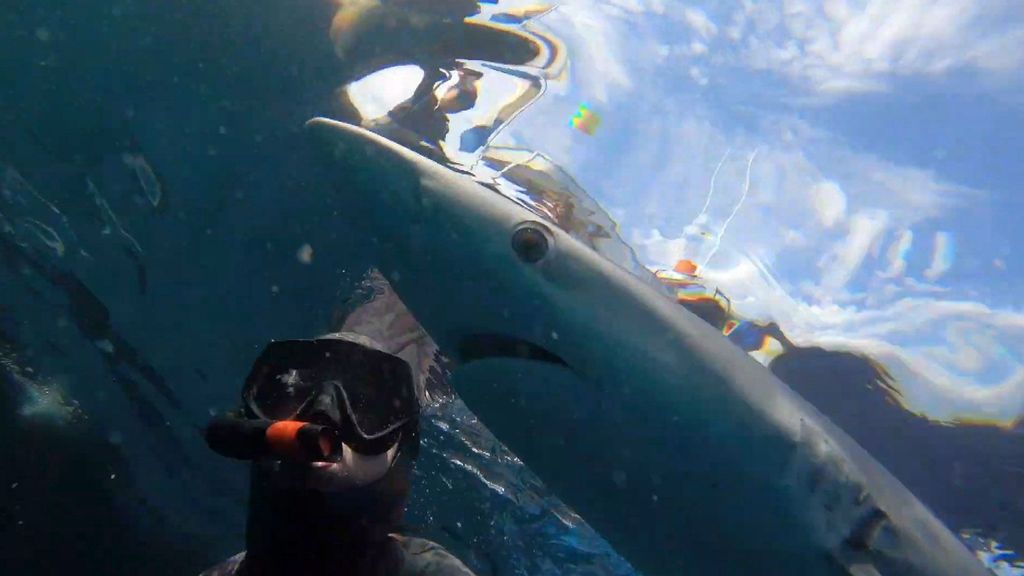 Video of blue sharks off the coast of Plymouth, England, by James Glancy, a former host of the TV show “Shark Week,” shows them cruising past him to feed on small fish and squid.

The former British Royal Marines Commando turned television presenter and conservationist uses his videos and social-media posts to raise awareness of the rapid decline of the world’s shark populations.

Glancy said sharks have spent decades being demonized because they are a mysterious ocean predators.

“But in reality, it’s clear to us now that sharks have more to fear from humans than the other way around,” he said.

As of 2013, it was reported that “the number of sharks killed each year in commercial fisheries is estimated at 100 million.” Sharks are also killed as by-catch in fishing nets.

The report, compiled by researchers at Dalhousie University in Halifax, Canada, found that “between 6.4 percent and 7.9 percent of sharks of all species are killed annually.”

“Biologically, sharks simply can’t keep up with the current rate of exploitation and demand,” Boris Worm, a marine biologist at Dalhousie University, said of the findings. “Protective measures must be scaled up significantly in order to avoid further depletion and the possible extinction of many shark species in our lifetime.”

Glancy said humans are slowly driving shark species toward extinction, with some species having declined by 90 percent.

The International Union for Conservation of Nature Shark Specialist Group reports that 77 percent of shark species and ray species qualify as threatened with extinction.

Glancy said the most important thing people can do is reduce fish consumption, which is driving industrial fishing.

Without a rapid turnaround in the way oceans and marine life are treated, Glancy fears countless more species will become extinct.

One of his previous projects involved filming videos with adventurer Bear Grylls in Germany and the Bahamas. During the event, he filmed bull sharks, tiger sharks and hammerhead sharks, which are all top ocean predators.

He said getting close to the powerful predators was an incredible experience, and he hopes his videos will encourage more people to take the plunge.