1,600-Year-Old Mosaic To Go On Display In Israel

The mosaic carpet, ornamented with geometric motifs, is believed to have been part of a wealthy family’s home. 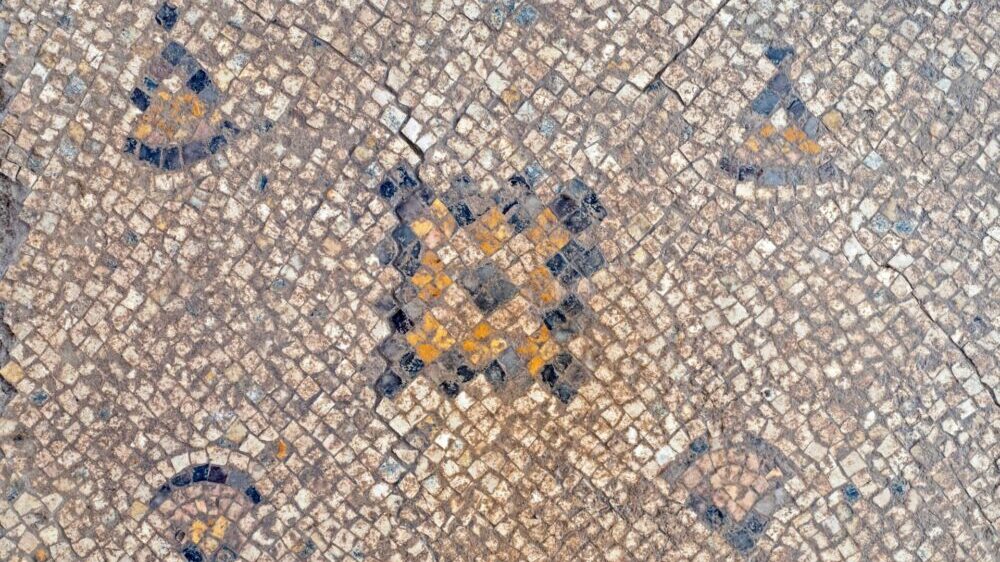 A 1,600-year-old mosaic dating to the Byzantine period (4th–5th century C.E.), unearthed during an archaeological excavation near Yavne, will be on public display in the plaza outside the city’s cultural center.

The colorful mosaic, which is believed to have been part of a wealthy family’s home, was discovered on a dig southeast of Tel Yavne, an ancient city where archeologists have discovered evidence of settlements dating as far back as the Bronze Age (3300–1200 B.C.).

The initiative was launched by the City of Yavne, the Israel Antiquities Authority and the Israel Land Authority.

In recent years, the Israel Antiquities Authority has been conducting large-scale excavations in the area as part of the Israel Land Authority’s city development program.

The excavations, directed by Elie Haddad, Liat Nadav-Ziv and Jon Seligman, also unearthed an extensive industrial zone that was in operation for several centuries. The neighborhood where the mosaic was discovered was believed to have been adjacent to the industrial zone.

At first the archaeologists thought they had stumbled upon a simple white mosaic belonging to yet another industrial installation. However, they noticed a few black patches on the mosaic, which suggested that it contained more than one color. Using a special acid to remove the whitish patina that had coated the mosaic for centuries, the archaeologists were astonished to find a colorful mosaic carpet, ornamented with geometric motifs.

The mosaic was then temporarily transferred to the Antiquities Authority’s mosaic workshop at the Rockefeller Museum in Jerusalem, where it was treated and preserved by the authority’s conservation experts.

The mosaic’s relocation and preservation will be carried out using ancient technological methods and employing materials similar to those used in antiquity.

As part of an endeavor to make archaeology accessible to the town’s residents, Yavne’s municipality is preparing the infrastructure for its placement in the plaza near the town’s cultural center.

“Archaeological preservation and awareness of the past are important values in the life of the city of Yavne, which has a magnificent history, said Mayor Zvi Gur-Ari. “In an age of progress and accelerated development in all fields of life, future generations should also be able to see how the city has evolved throughout history.”

For more information on mosaics in Israel, click here.

1,600 year-old mosaic to go on display in Yavne appeared first on ISRAEL21c.