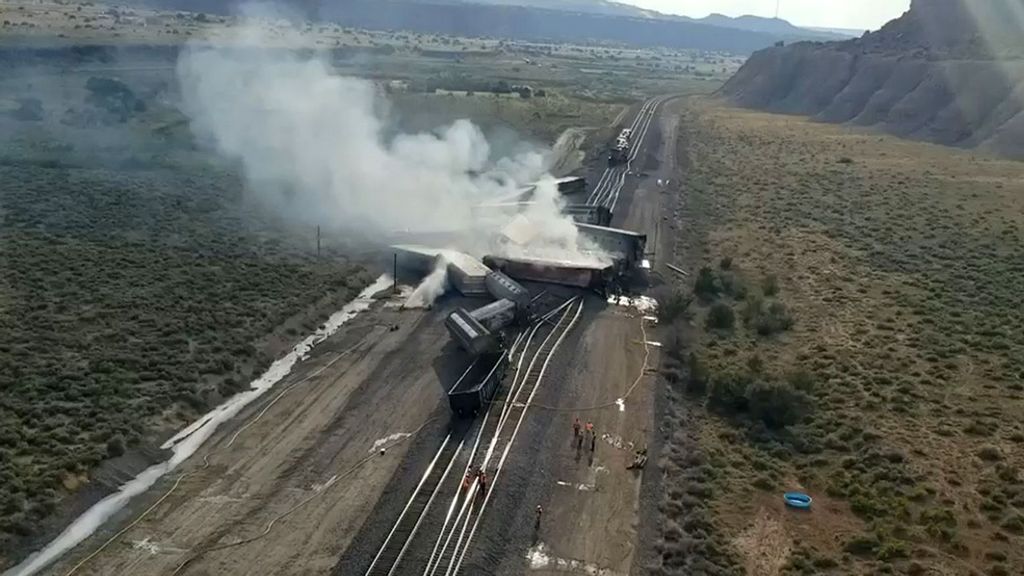 Damaged cargo but no injuries reported after a train derailed in Laguna Pueblo, New Mexico on June 14, 2021. (@BCSONM/Zenger News)

A derailed train in New Mexico caught fire Monday, forcing evacuations in a town west of Albuquerque — with a police helicopter flying overhead to captured the scene on video.

The Bernalillo County Sheriff’s Office shared footage from its aviation unit, saying no injuries were reported but “much of the cargo appeared damaged.”

According to a spokesperson for the Burlington Northern Santa Fe Railroad, a locomotive and several carriages derailed. The video shows a locomotive, on its side, smoking as firefighters blast it with water. More than a dozen train cars appear toppled and wrecked.

Most of the cargo was lost, but the train was not carrying any hazardous materials. Three of the cargo cars appeared to be transporting automobiles, stacked in three levels.

The heavy smoke forced officials to order the evacuation of residents in the nearby village of Mesita. Families were able to return to their homes the next day.

Both sides of the railroad track remained blocked and services were suspended after the crash. The cause of the accident is under investigation.

In 2020, there were 1,899 highway-rail incidents in the United States, according to Operation Lifesaver, a nonprofit national rail safety awareness organization. There has been an 82 percent decrease in these incidents since 1972, when average annual railway collisions totaled about 12,000.

Highway-rail grade crossing collisions, along with pedestrians trespassing on tracks, account for more than 95 percent of all railroad fatalities, according to Operation Lifesaver.

There were 57 railroad accidents in New Mexico last year, resulting in four fatalities and 38 nonfatal injuries, according to the Federal Railroad Administration, an agency of the U.S. Department of Transportation. Five of those incidents led to reportable damages of more than $100,000. Two led to damages over $500,000 and two more led to damages of over $1 million.

“It’s in their own best interest to keep their equipment and employees safe,” Beer said, “so they do a lot of track maintenance and checking the tracks frequently out here.”

Maintenance crews should check for cracks and breaks in the track, for natural obstacles, and for man-made objects that don’t belong in the path of a locomotive, Beer said. Rock slides, tree branches, and water can all cause railways to become unstable.