Grouchy grizzly gives chase, but is too heavy to climb the woodland trunk. 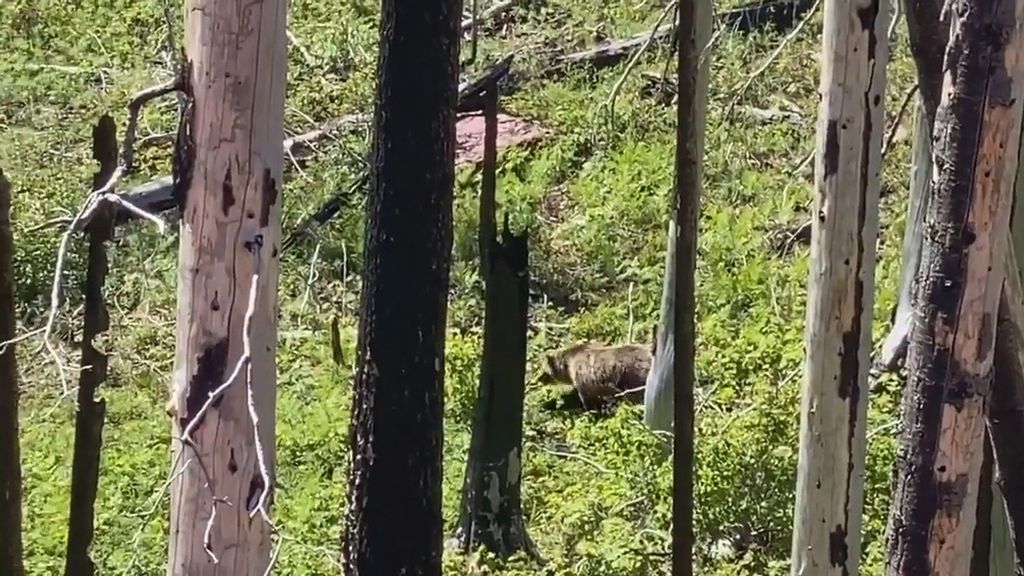 A grizzly bear is seen in Glacier National Park in Montana shortly before it chases a black bear up a tree.  (@GlacierNPS/Zenger News)

It’s not exactly David versus Goliath, but a black bear found itself scrambling up a tree to escape a larger grizzly bear in Montana’s Glacier National Park.

The incident was caught on video by a park visitor who posted it on June 15. The 25-second scene has since been viewed more than 120,000 times on Facebook.

“Check out this amazing video of grizzly and black bears interacting from visitor Anthony James!,” the park said in the posting.

“Normally agreeable when food is abundant, grizzly and black bears run into one another more often when food is scarce — like early summer.

“While grizzly bears are larger and typically stronger than black bears, this black bear displays its powerful exit strategy: Climbing!”

Park officials note the black bear’s short, sharp claws are ideal for tree climbing, while the grizzly’s longer, duller claws are great for digging “but poor for climbing — especially because an adult grizzly is substantially heavier than a black bear.”

Indeed, full-grown male black bears typically weight about 500 pounds, with females roughly half of that, reports Bear With Us, a nonprofit that protects black bear cub orphans and injured black bears of any age. Male grizzlies can weigh up to 1,700 pounds, while a large female can weigh up to 800 pounds. (The sexes of the bears in the video are unknown.)

Despite its lack of climbing skills, the grizzly in the video tries unsuccessfully to ascend the tree the black bear had so skillfully scaled. The black bear then climbs a bit further, just to be sure it is well out of reach.

Glacier National Park is home to about 600 black bears and 300 grizzly bears, also known as the North American brown bear, within its 1,583-square-mile environs, the park service estimates.

Overall, the total populations of both types of bears appear to be stable or growing, earning the two “least concern” rankings from the International Union for Conservation of Nature’s Red List of Endangered Species.

The service advises visitors to remain at least 100 yards from bears (and wolves) in the park.

“Never intentionally get close to a bear,” the service said. “Individual bears have their own personal space requirements, which vary depending on their mood. Each will react differently and its behavior cannot be predicted.”