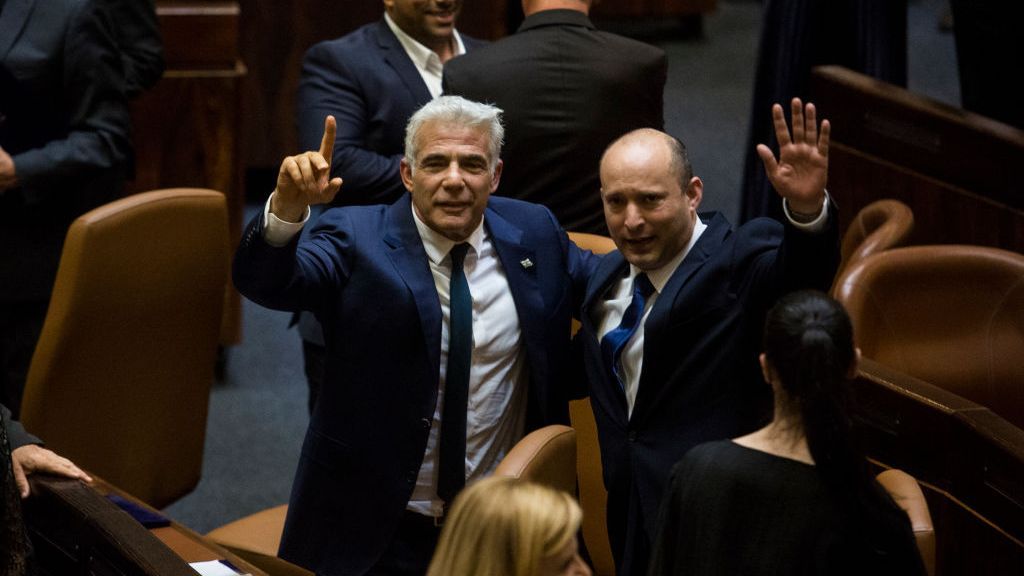 Given the close relationship between former President Donald J. Trump and Netanyahu, the longest-serving Israeli leader, the outreach from the White House sparked hopes of a freeze on the creeping partisanship of America’s perspectives on Israel. (Netanyahu also spent part of his childhood in Philadelphia.)

The value of the leadership was not lost on Yair Lapid, the new Israeli foreign minister and confederate of Bennett, who hopes to ascend to the Israeli premiership himself in two years — assuming the new anti-Netanyahu coalition holds.

“We find ourselves with a Democratic White House, Senate and House, and they are angry,” the centrist Lapid said in a recent speech pushing for the removal of Netanyahu from office, decrying the loss of bipartisan U.S. support for Israel.

“We need to change the way we work with them.”

After growing criticism of Netanyahu’s treatment of Palestinians, his unusually close friendship with Trump intensified an emerging debate among Democrats about their part in decades of unquestioning bipartisan U.S. support for Israel.

Once a fringe conversation within the party, it came to the fore during the Trump administration at the same time as a number of high-profile Muslim Democrats were elected.

Then-freshman Rep. Rashida Tlaib (D-Mich.), who is Palestinian, and fellow “squad” member Rep. Ilhan Omar (D-Minn.) — both Muslim — were banned from visiting Israel in 2019 after they criticized Trump’s support for Netanyahu and chose to vote against a resolution to condemn a Palestinian-led movement calling for boycotts on Israeli companies. Tlaib was later granted permission to visit her grandmother on humanitarian grounds but declined.

But although the new Israeli coalition may look to improve relations between Israel’s government and Democrats now in power in the U.S., some experts question whether the new regime in Jerusalem can achieve that goal.

Bennett’s right-wing leanings, coupled with growing pressure from U.S. progressives to cut aid to Israel, may only present more challenges for bilateral relations.  In the end, though, little may change, according to Natasha Hall, senior fellow at the Center for Strategic and International Studies.

“Certainly, the Trump administration was much more willing to work with Netanyahu to make some bold strides, like these bilateral peace deals with Gulf countries and other Arab states and moving the embassy to Jerusalem,” Hall told Zenger News.

“That said, President Biden during the campaign said that he wasn’t going to reverse any of those decisions,” she said. “I don’t think it will substantially change U.S. policy in any sort of way, as U.S. policy hasn’t really changed considerably in decades.”

In the past, Netanyahu and Biden had a close friendship forged over 40 years in the public eye and enjoyed a “longstanding personal connection.”

The dynamic soured in recent years as Netanyahu embraced Trump and his Republican Party, so the removal of Israel’s longest-serving leader was viewed as a relief to the Biden administration and some congressional Democrats.

However, Bennett does not offer Biden the cleanest of breaks.

Born to American parents in Israel’s third-largest city of Haifa, the onetime tech entrepreneur entered politics as Netanyahu’s chief of staff before losing the post in 2008. Bennett later went on to lead the pro-settler Jewish Home party in 2013, before changing its name to Yamina (or “Rightward”) in 2019.

As a religious right-wing politician, Bennett has also been an open supporter of the expansion of settlements into Palestinian territory and opposes a Palestinian state.

In addition to opposing a two-state resolution in the region, the new Israeli prime minister — like Netanyahu — opposes the Iran nuclear program, as well as U.S. involvement in the Iran nuclear deal negotiated under former President Barack H. Obama, but trashed by the Trump administration. The new Israeli leader criticized Biden’s talks in Europe over the weekend about the U.S. rejoining the deal.

That sets up challenges for the Biden-Bennett relationship.

“Both the new Israeli government and the Biden administration will spend at least the next few weeks repairing relations that were damaged in the Netanyahu era. They will agree to disagree on Iran,” Paul Scham, a Middle East Institute non-resident scholar who lectures on the Israeli-Palestinian conflict at the University of Maryland, told Zenger.

Also, Netanyahu will be breathing down Bennett’s back, having pledged to return to power. Scham said both the new Israeli prime minister and Biden, in terms of his foreign policy, will be constrained by the way the new government was formed.

“Bennett, the ultra-nationalist, is significantly constrained by his coalition partners, just as they are by him. Biden realizes this is not the time for a two-state-solution push and will pay it lip service. But in practice, will focus on ameliorating Palestinian life,” he said.

Bennett comes to power as the head of a fragile coalition consisting of eight parties with widely differing views — including a small Arab party that recently made history by joining an Israeli government for the first time in the Jewish nation’s history.

His party picked up just seven seats in the March elections for Israel’s 120-seat Knesset, before teaming up with Lapid (whose party won 17) and a hodgepodge of six other small parties to form their fragile 61-seat anti-Netanyahu governing coalition.

This fragility in Israel’s new coalition government will ultimately dictate the relationship between the Biden administration and Israel for years to come, according to Jim Phillips, senior research fellow for Middle Eastern affairs at the Heritage Foundation.

“Although Prime Minister Bennett may be farther to the right on some issues than Netanyahu, Bennett will have less freedom of action than Netanyahu because of the fragile nature of his disparate coalition. He is less likely to challenge U.S. policymakers on issues that could fracture his alliance with leftist and Arab political parties.”

“This could lead to a honeymoon period between the White House and the new government, but tensions are likely to remain high with the anti-Israel left wing of the Democrat Party, which will continue sniping at Israeli leaders,” he said.

The growing division between “establishment” Democrats who seek to maintain the U.S.’s historical role as Israel’s closest ally and more progressive members — some of whom even deem Israel an apartheid state due to its treatment of Palestinians — has been “long and coming” in the U.S.-Israel relationship, added Hall.

“You see it because more youthful voters are opposed to some human rights violations of the Israeli occupation,” Hall said. “This was going to happen regardless … because a lot of those issues stem from the occupation itself.”

During his recent 12 years in power, Netanyahu sough to undermine a two-state solution to the Israeli-Palestinian conflict by expanding Israeli sovereignty over Palestine. Clashes between Israeli forces and Palestinian militant groups like Hamas — including the recent violence in Gaza — also continued to plague the region.

In response, some Democrats voiced support for the controversial “Boycott, Divestment, Sanctions” movement, and called to reduce the $3.8 billion in annual military aid sent to Israel.

The political realities in Israel’s new coalition means Bennett’s new government is unlikely to annex the West Bank or invade Gaza — but that it is equally unlikely, even under Lapid, to pursue significant peace initiatives with the Palestinians.

While the fall of Netanyahu’s second premiership may not prompt any major changes to bilateral relations with the U.S., the end result may be that Democrats are forced to come to a “more cohesive stance when it comes to Israel,” Hall said.

“If you look at Biden’s past record and even his words during this most recent escalation, for now, he’s not going to radically alter his rhetoric,” she said. “But, certainly, he’s going to see a lot of pressure from within the party, especially if there is another escalation in violence, to really reassess the relationship.”