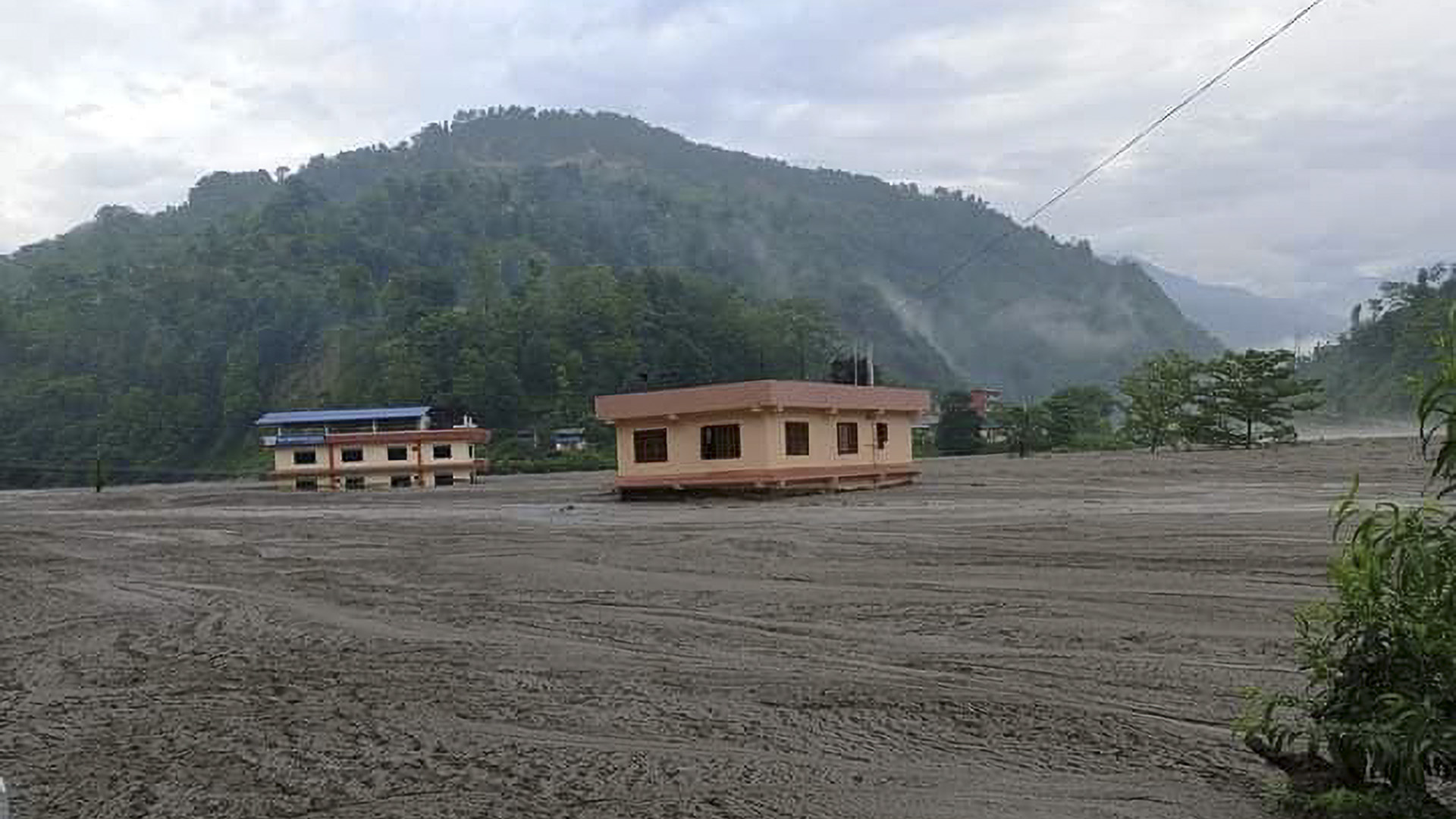 The flash flood is suspected to be triggered by a glacial outburst in a high lying area bordering Tibet, according to Rudra Prasad Dulal, Ward Chair of Sindhupalchok ward 11. He said the outburst has resulted in a loss of millions of rupees.

“Reason behind this flash flood is attributed to heavy rainfall in upper lying areas,” he said.

“Shaken by the 2072 (Nepali date of 2015) earthquake, creeks on the inner areas of the hills are suspected to be swept by large masses of ice and muds. We are suspecting it to be a glacial outburst.”

He said that the movement of ice masses underneath the glaciers backed by incessant rainfall has run down the hill and dumped in the low-lying areas.

As per officials, approximately 200 families residing along the Melamchi River Corridor have been shifted to a nearby local school since June 15.

Once a brimming marketplace and center of attraction, Melamchi town remains submerged in a thick layer of mud, sand, and water. As per the official, about 200 houses in town have been damaged partially or completely in the mayhem, which began with the onset of the monsoon.

“I just had returned from my field, when brother-in-law who resides in Dhap [a locality in Sindhupalchok] called me and warned me to flee to safer ground stating a river has been blocked from flowing due to landslide, which might burst and flood the town where we reside,” said Radhika Shrestha, one of displaced due to flood.

“I called my husband, who was working in the field, to rush out from there. We ran to high edges without any second thoughts. As flood took away our land and all key documents, our family has to survive whether by doing labor or any other means.”

“We are yet to think about making a new start,” Laxmi Prasad Shrestha, another flood victim from the area, said.

“All the riches which we earned lie in that house which is now covered in mud and is not accessible. We don’t have anything now, and we are clueless about where to go and how to go.”

Sindhupalchok, one of the epicenters of the 2015 earthquake, is witnessing damages due to landslides on an annual basis. The landslides and floods are expected to rise further as the monsoon approaches in the Himalayan nation.

Nepal receives 80 percent of its annual rainfall in the monsoon (June- September). The average rainfall in the country is 1600 millimeters. However, it varies by eco-climatic zones (3,345 mm in Pokhara and below 300 mm in Mustang).

The Meteorological Forecasting Division has estimated the high mountainous region of Nepal to receive 55 to 65 percent rainfall (snow mainly) in 2021.

“We have recorded a total of six foreign nationals missing since June 15,” Pokhrel said.

“There are a total of 20 people missing in the flash flood. The missing foreigners include three Indians and three Chinese nationals. They were working on a development project here.”

“We are continuing the search of those missing. Apart from foreigners status of 14 locals also is yet to be ascertained. We are working to locate their status,” he said.