VIDEO: Controversial Cliffhanger Installation That Ruins Alpine View To Be Removed In September

Fake door that says “tourist information” is meant to be a satire on selfie-snapping sightseers.
By Joseph Golder June 16, 2021
Facebook
Twitter
Linkedin
Email 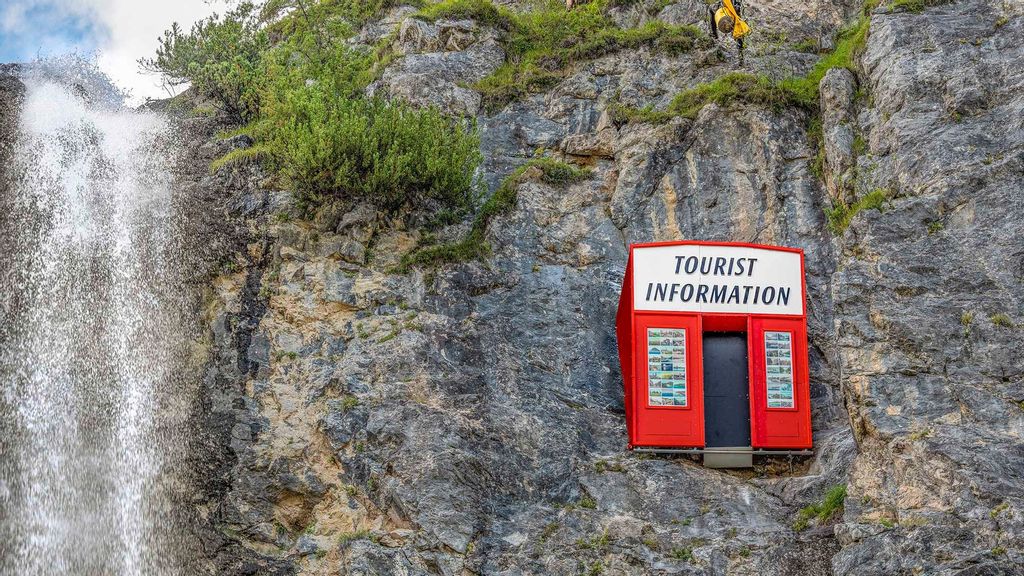 The controversial “Cliffhanger” installation at Myra Falls in Austria will be removed in September. (Steinbrener, Dempf & Huber/Zenger News)

A controversial art installation on the side of an Austrian cliff next to a waterfall will be removed in September after complaints it ruined the view for tourists at the picturesque site.

The installation, called “Cliffhanger,” is at Mirafalls in the Oetscher-Tormaeuer Nature Park. The artwork by Austrian art collective Steinbrener, Dempf & Huber features a large red fake doorway with “tourist information” written above it next to the waterfall.

Florian Schublach, head of the nature park, which describes the site as the “Grand Canyon of Austria” with “thundering waterfalls” and “unique nature,” commissioned the art installation.

Schublach said he thought it “was a really good idea.”

Christoph Steinbrener of the art collective said the installation was meant as a critique of mass tourism, a tongue-in-cheek joke at the expense of tourists. It was there to ruin the shot for selfie-seeking tourists.

“During the week, there is nearly no one there, and it is really a very nice, romantic place. But at the weekend, it is the complete opposite. You have to stand in line, and it is completely overcrowded. This, for us, is a sign of the times,” he said.

The installation is a “reflection on touristic overuse. For us, it was in a way perfect. This area, every year, is completely overcrowded and in a way, this sense of nature is lost.”

He said he was delighted to learn many tourists visiting the area make the waterfall the highlight of their hike and try to keep their art installation “out of shot when taking selfies.” He said visitors either understand the installation or say it is a catastrophe.

Steinbrener said both reactions were exactly what he and the other members of the collective — photographer Rainer Dempf and architect Martin Huber — had been going for.

“Humor is a good vessel for serious ideas,” Steinbrener said.

One of the group’s early projects in 2005, which gained international attention, was called “Delete!” It showed an entire street in Vienna with every sign and brand name covered; the aim was to critique advertising, Steinbrener said.

The collective’s current exhibition at the Landesgalerie Niederoesterreich in Krems, titled “We Are Everywhere — The Cliffhanger Collection,” explains the “Cliffhanger” installation, with an emphasis on how pervasive taking selfies has become.

An earlier version of this article referenced Myra Falls, a different nature park. The location is Mirafalls. Zenger regrets this error.