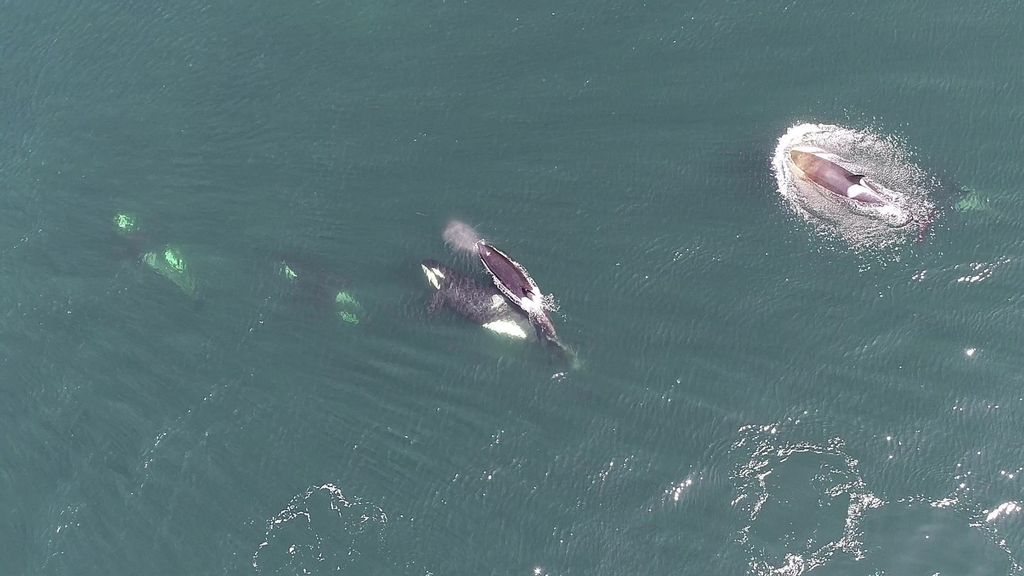 A new study that used drones to film killer whales discovered that they have complex social structures including close friendships. (Center for Whale Research-University of Exeter/Zenger News)

Stunning aerial footage of a pod of killer whales is helping researchers uncover the predators’ secret social lives, watching them pick and choose friends and become less sociable as they grow old.

Researchers from the University of Exeter and the Center for Whale Research concluded that the marine predators, feared in the open water and long a feature of Sea World theme parks, form complex social structures in their pods.

“Until now, research on killer whale social networks has relied on seeing the whales when they surface, and recording which whales are together,” Michael Weiss, lead author of a new research study, said in a statement.

Using 651 minutes of drone footage captured over the space of 10 days, the team gained new insights into the lives the orcas live.

“Looking down into the water from a drone allowed us to see details such as contact between individual whales,” Weiss said. “Our findings show that, even within these tight-knit groups, whales prefer to interact with specific individuals.”

He summarized the marine mammals’ behavior by comparing it to children at a birthday party.

“When your mum takes you to a party as a kid — you didn’t choose the party, but you can still choose who to hang out with once you’re there,” said Weiss.

Orcas are the largest member of the dolphin family, occupying every ocean on Earth and feasting on a diet that includes great white sharks, seals and penguins. Despite their status at the top of the marine food chain, there is no recorded instance of any killing a human being.

Orcas spend more time with the pod members they prefer, his team discovered — much like people do. They also tend to form attachments to other killer whales of the same sex and near their own age.

The factors driving these behaviors are not well understood, but it’s clear that the animals engage in them up-close and personal.

“We were amazed to see how much contact there is between whales — how tactile they are,” said Professor Darren Croft from Exeter’s Centre for Research in Animal Behaviour. “In many species, including humans, physical contact tends to be a soothing, stress-relieving activity that reinforces social connections.”

“We found fascinating parallels between the behavior of whales and other mammals, and we are excited about the next stages of this research,” Croft said.

The study, which built on more than four decades of data collected by the Center for Whale Research, was published in the Proceedings of the Royal Society B, a biological sciences journal.