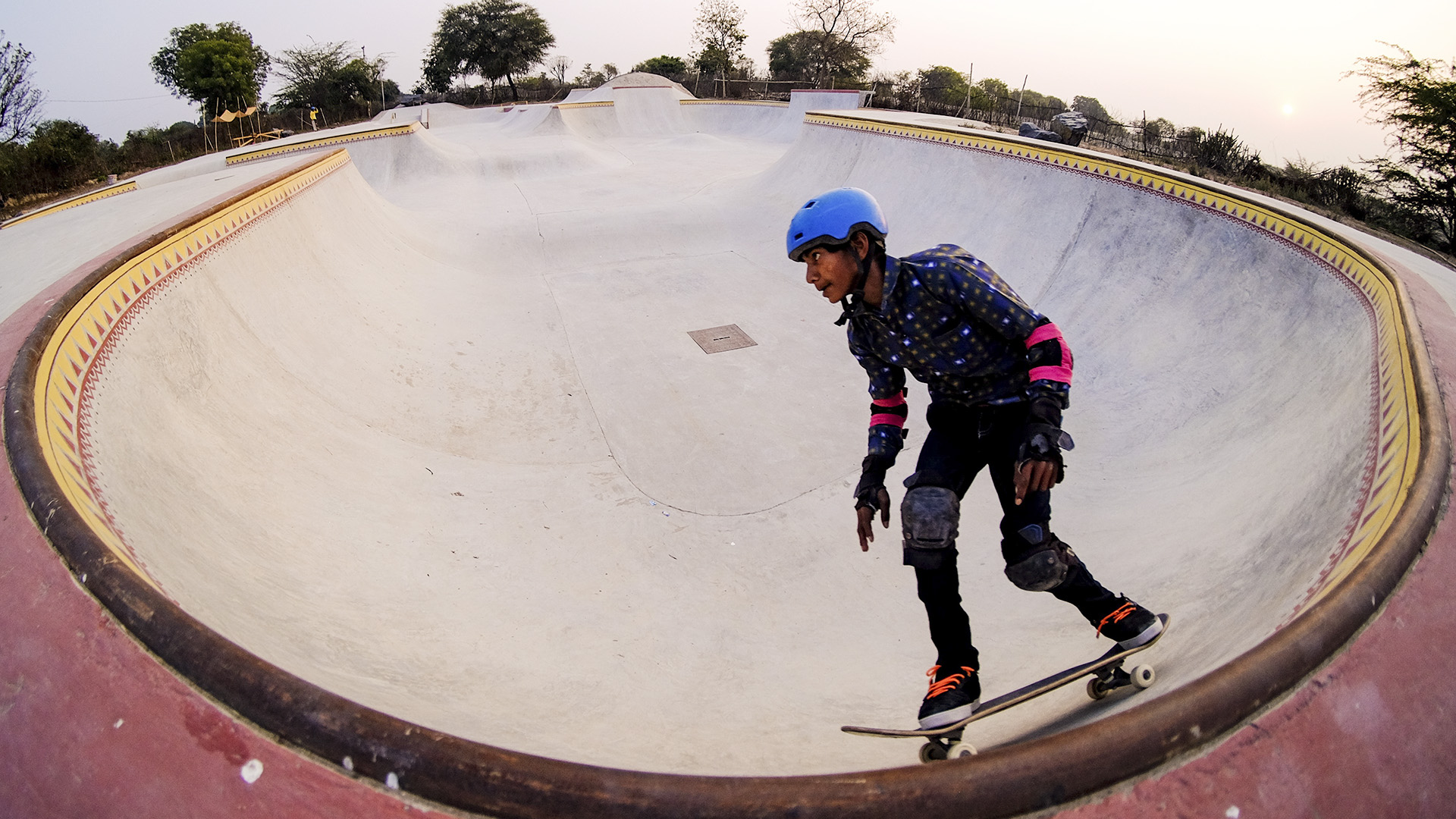 Once "Skater Girl" filming was complete, the skate park was handed over to the local community. (Anish Christopher 'Kevin')

Skateboarding entered the Olympics only this year and is still not a common sport in a cricket-crazed India. Manjari, however, revealed that she was excited to discover skate parks at more than one place in India, indicating the sport is gaining ground.

“I had no idea about it,” Manjari told Zenger News.

“When we discovered skate parks at more than one place, we went on this journalistic research to find them and the communities associated with them. We were inspired. That’s when we took a year off and decided to make a skate park in a new place, to make a social change.” 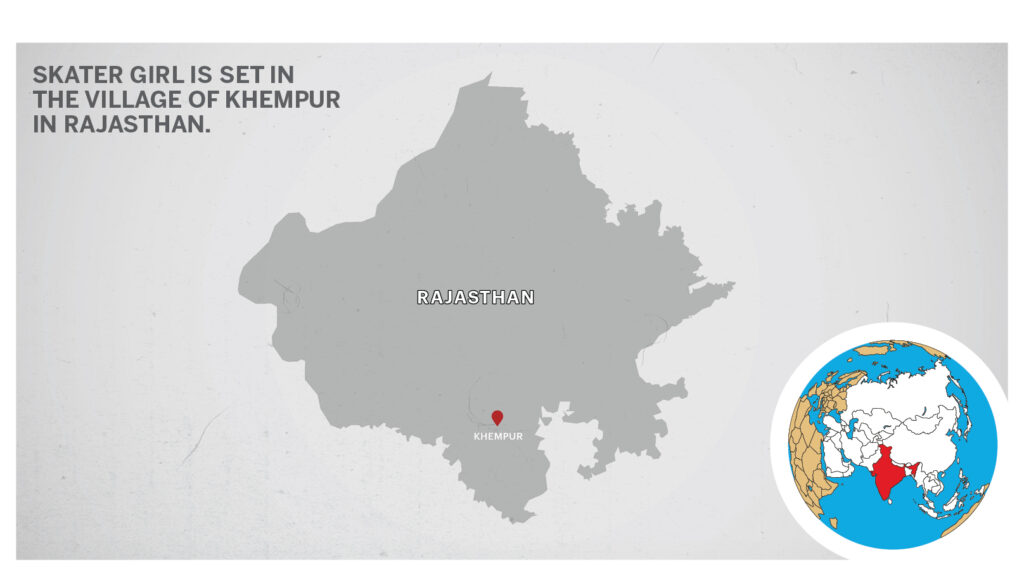 Manjari is the daughter of Bollywood actor Mac Mohan who played Sambha in the classic film “Sholay”.

After intensive research on skateboarding and its cultural and social impact, Manjari and her producing partners — sister Vinati Makijany and husband Emmanuel Pappas — undertook a challenge to build a 14,500-square-foot skate park for their shoot.

And Desert Dolphin was born in Khempur, a small city in the northern Indian state of Rajasthan. The filmmakers road-tripped more than 600 miles across India to find a location that combined a rustic backdrop and concrete roads for skateboarding.

“Building Rajasthan’s first skate park was a challenge in itself. We were filming in the scorching heat, and we had children, hundreds of them — all non-actors, who were skateboarding for the first time,” Manjari said.

“We decided to bring in an international crew to film throughout in a small village in the middle of nowhere. But, it has all been so rewarding because I finally see our passion project translated on the screen.”

The opening scene of “Skater Girl”, which premiered on streaming platform Netflix on June 11, features a teenage tribal girl tugging a rope attached to a makeshift skateboard as she runs along a dusty road with her brother seated on the board.

While sets are usually done away with once the film is wrapped up, it was not the case with “Skater Girl”, which was initially titled “Desert Dolphin”. Once the filming was complete, the skate park was handed over to the local community.

Now, it is changing the lives of several village kids, just like in the film. After the film was completed in 2019, Desert Dolphin has been used by hundreds of village children to skate for free.

Recalling an incident of a boy “who was written off as slow and was not included in things”, Manjari said, “After taking to skateboarding, he is a topper of Sanskrit in his school and took part in the 58th National Roller Skate Championship a few months ago.”

Three more village children have even gone on to represent Rajasthan in the championship, held in Mohali, in the northern Indian state of Punjab, on April 10.

“This was the first time these kids, fondly called dolphins, had stepped outside their village,” Anish (Kevin) Christopher, the kids’ coach and founder of WeSkate Co, said in a statement.

“For them, every encounter was a new experience, whether it was traveling in trains, using elevators and escalators, or merely seeing tall buildings. They were awestruck watching so many skaters in one place.”

Most of the dolphins work in the fields to help their families make ends meet, but skateboarding, too, has become part of their daily lives.

“When we decided to build the skate park, we knew it would not be just a set,” Vinati told Zenger News.

“So, a lot of effort went into making it into something that stands time. But it was very satisfying for us that this film would be much beyond what people would see on screen. The structure will remain there, intact for the village children to use.”

In May this year, film studios UV Creations and T-Series, which are together backing the movie “Radhe Shyam”, decided to donate their film set property to a local hospital in Hyderabad in the wake of peaking coronavirus cases. The set included custom beds, stretchers, personal protective equipment, medical equipment stands, and oxygen cylinders.

In the case of “Skater Girl”, India’s skate park design company 100 Ramps and skate collective Holystoked assembled the skate park within 45 days in 2018 with the help of local and international build crew.

“From writing the script with a social backdrop, which has to be engaging, entertaining and yet incorporates subtle nuances, and the dualities while introducing skateboarding as a mainstream sport in a way it is accessible is a challenging endeavor,” said Manjari.

The story follows the life of Prerna, played by Rachel Saanchita Gupta, a local teen struggling to live her life bound by duty and traditions. However, when London-bred advertising executive Jessica, played by British-Indian actress Amy Maghera, visits the village, she introduces the children to the world of skateboarding.

The kids, including Prerna, soon become infatuated with the sport and end up skating through the village. But Prerna is left with an ultimate choice to conform to society’s expectations or live her dream of competing in the National Skateboarding Championship.

The filmmakers took a non-traditional approach to casting and organized theater workshops for youth actors and children in skate communities to finalize their leads and cast.

“I was a completely new person on sets and was petrified of skateboarding because, at some time, I thought I could not do it,” Rachel, who makes her debut in films, told Zenger News.

“But Manjari and Vinita were there for me, and they told me I could.”

Maghera, too, feels it has been “amazing what they [Manjari and Vinita] have done”.

“I was thrilled to see Khempur, the skate park, and how they donated the set for these kids and changed their lives,” Maghera told Zenger News.

“The sense of community and kids competing in the national championship is amazing, and it is rare to find people who are this caring.”

“We picked skateboarding because the idea is so unconventional and novel but still has a fantastic impact on the community and the individual,” said Vinati. “It is such an individualistic sport; you are the king of your path. We noticed that in every kid who was skateboarding, and we used it as the backdrop.”

Manjari is also working on a documentary titled “Skate Basti” about making the Desert Dolphins and its impact on Khempur.

“We went through the realities of rural girls of Rajasthan. I met a girl, and she wouldn’t step out. But I got talking to her, and she revealed she was married off at 15. Her husband left her because she was more educated than him.

“On asking her what she would do if she were not in this position, she teared up and said, ‘nobody has ever asked me’. So, we wanted to tell the story of having the agency of thinking, of education, and living on your terms, more authentically,” she said.

“The movie is dedicated to such kids and on how such an unconventional sport has helped them in building their confidence.”

Previously, Manjari impressed everyone with her critically acclaimed short film “The Last Marble”, which won Best of Fest at the Clermont-Ferrand International Short Film Festival.

She followed it up with other short films, “The Corner Table” and “I See You”, which won Best Short at the Asian American International Film Festival and was showcased in Cannes at the Emerging Filmmakers Showcase.

Next, Manjari is coming up with another feature, “Spin”, based on a young female DJ. Releasing in August, it is Disney Channel’s first original TV film to be centered on Indian culture since “The Cheetah Girls: One World” in 2008.

“‘Spin’ is also a coming-of-age story on how an Indian-American teen finds the passion for music and chases her dream of creating it. I always have this theme of people who are chasing their dreams.”