Even In Utah, Trump’s Republicans Sour On Mitt Romney

The former president's supporters may not like their senator, but still may struggle to find an alternative in the Mormon state.
By Justin Higginbottom June 16, 2021
Facebook
Twitter
Linkedin
Email 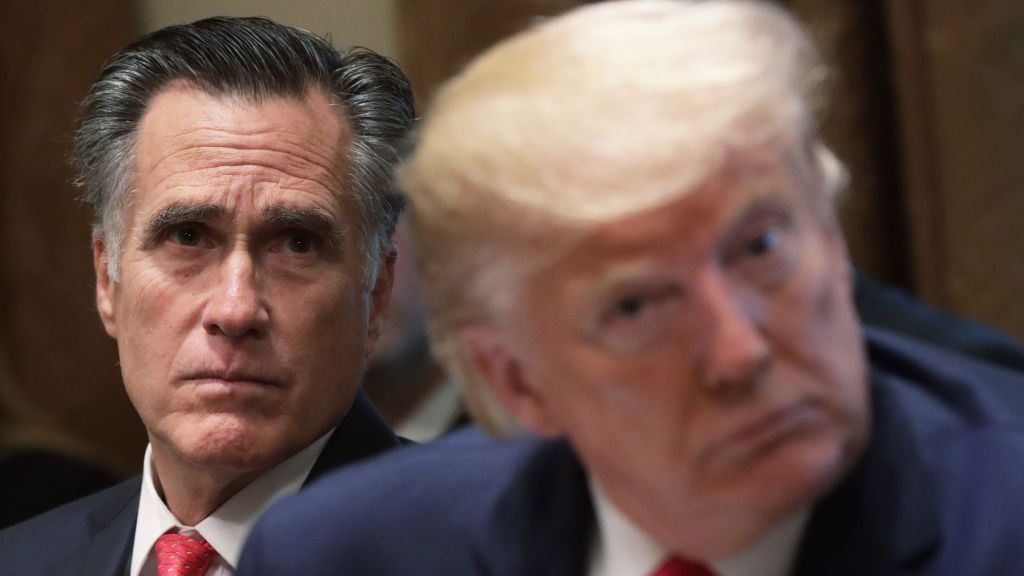 SALT LAKE CITY — A chorus of boos greeted Sen. Mitt Romney (R-Utah) at a Republican Party state convention here in his adopted Utah last month — but for the former presidential hopeful and Mormon princeling, heckling from his party long ago lost the surprise factor.

Video of a detractor calling him a “traitor” at the Salt Lake City airport went viral online earlier in the year, and in February, he met President Joseph R. Biden in the Oval Office, prompting online vitriol.

As he entered the convention, he was waiting for a censure motion over his two votes to convict former President Donald J. Trump on impeachment charges.

But perhaps only in majority-Mormon Utah could Romney — whose family ties link back to descendants of Joseph Smith, the founder of the Church of Jesus Christ of Latter-day Saints — stare down Trump’s new Republican “base” and brush it off in stride.

Still, the tight margin against the party’s 2012 presidential candidate showed just how much Trump’s “Make America Great Again” had remade the GOP.

“The influence of the MAGA wing of the party is strong in Utah but not overwhelming,” LaVarr Webb, a political consultant who runs Utah Policy, told Zenger News, explaining that Romney was helped by the unwavering support of Utah’s business community.

Behind the veneer of the tight vote, though, something was afoot.

A Deseret News/Hinckley Institute of Politics poll in January this year found 64 percent of Republicans in Utah disapproved of Romney’s job performance — although his overall popularity remained steady due to Democratic Party and unaffiliated support. (Democrats in the heavily Republican state, meanwhile, gave Romney an 84 percent approval rating.)

A UtahPolicy.com/KUTV2News poll this month showed Romney doing somewhat better — with 56 percent of voters in the state approving of his performance — but still 69 percent of those identifying as “strong” Republicans disapproving of the senator.

The next senator in the state to face re-election is Sen. Mike Lee, but he faces little opposition from Trump loyalists and is not expected to face a primary challenger before he goes on the ballot for a third time in the 2022 midterms.

Romney’s dismal approval figures, on the other hand, bode poorly for his chances at an equally unimpeded run for re-election as Utah’s junior senator in the 2024 cycle.

“There will be people lined up to primary him for sure,” Utah GOP chairman Carson Jorgensen, whose recent election to his post was part of a Trump loyalist takeover of the state party leadership, told Zenger, adding that his feelings were mixed.

So far no candidates had put their names forward to primary Romney in 2024, Jorgensen explained, and Romney still enjoys a wide base of support among Utah Republicans.

As America’s highest-profile Mormon politician in a state long dominated by the GOP, the Michigan-born former Massachusetts governor is also somewhat of a natural fit in Utah. By comparison, Utah voters were at first skeptical of the thrice-married, bombastic Trump when the New York property developer and reality TV sensation ran for office.

Unlike many of his colleagues, including Sen. Lee, Romney remained off the bandwagon.

That hurt him — even in Utah.

Jeff Merchant, the chair of the Utah Democratic Party, said he has noticed the split within the Republicans in the state and hoped it could open a path to competitiveness there.

“More than any other United States senator, Mitt Romney exemplifies this split” in the GOP, he said. “It’s going to become harder and harder for what we may call traditional conservatives to win races, even in places like Utah, if this split continues.”

“What Mitt Romney represents is a dying part of the Republican Party that is going to have to choose to either go further and further to the right,” Merchant said, “or finally draw a line and start voting for Democrats.”

Although President Joseph R. Biden Jr lost in Utah last year, he won more votes there than any Democratic candidate since the party last carried the state in the 1964 election. Sen. Bernie Sanders won presidential primaries in the state in 2016 and 2020, proving to observers there is a potential progressive base.

Utah is also one of the fastest growing states in the country by population, with many moving from predominantly Democratic-voting coastal enclaves like California or New York, a trend some observers say will chip away at the sway of GOP hardliners and give a leg-up to moderates.

Meanwhile, “moderate” remains a nebulous term in a state dominated by one religion.

In fact, other than on the impeachment votes, Romney’s critics are hard-pressed to find examples of him actively hurting the Trump wing’s “MAGA” agenda. Instead, the most vociferous opposition to the senator has tended to come down to personality.

Kish North of the Utah Patriots, an America First movement within the state, said he does not like Romney for a few reasons: his perceived openness to gun control proposals, his votes to impeach Trump, and his presence at a Black Lives Matter rally in June 2020.

“He doesn’t support an America First agenda,” North said, adding that he hopes Romney is challenged by a credible candidate more in line with Trump’s “MAGA” style in 2024.

“He’s a fake and a fraud as far as I’m concerned,” he said of Romney.

North said he hopes Utah’s Republican governor, Spencer Cox, is also defeated in the party’s primary elections before his next run for governor in 2024, due to the first-term leader’s support for mask mandates and affirmative action policies

But the biggest target remains the state’s junior senator. North said he gets kicks out of visiting Romney’s social media and seeing negative comments from across the nation.

“People have turned on Mitt Romney. They don’t like him. They just don’t,” he said.

For Jorgensen, the state GOP chair, though, the Trump/Romney feud need not be fatal.

“I’m trying to bring the party together at this point,” he said. “What even I tend to overlook is the fact that Mitt Romney voted with Trump more often than even Sen. Mike Lee.”