El Salvador’s Adoption Of Bitcoin Welcomed By Crypto Enthusiasts, But Salvadorans Are Skeptical 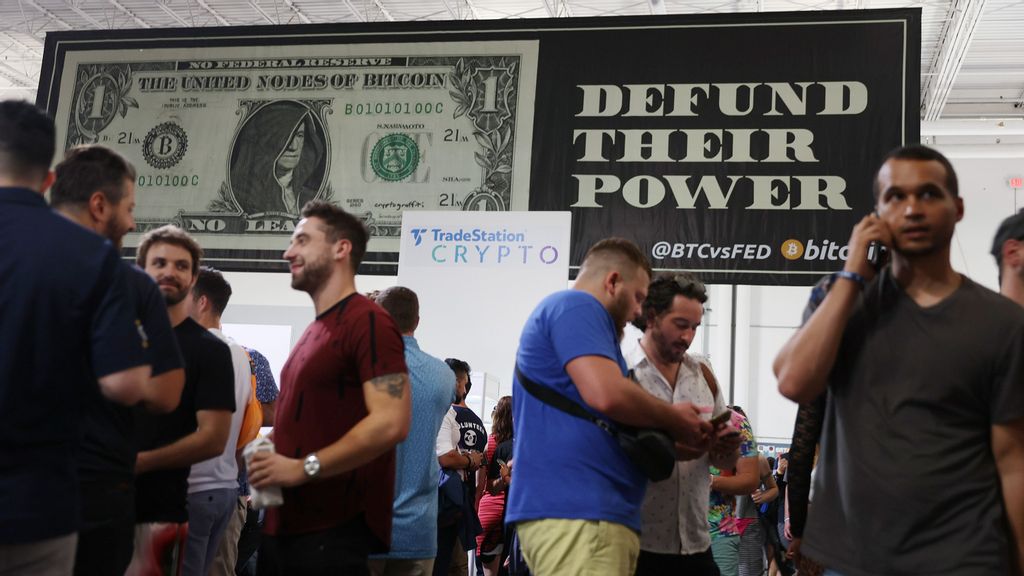 Cryptocurrencies provide users with an opportunity for empowerment and independence from nation-states. Many enthusiasts of these financial instruments attended the 2021 Bitcoin Convention, in Miami, Florida, on June 4. (Joe Raedle/Getty Images)

There is a widespread idea that cryptocurrency enthusiasts oppose the state, accusing it of coercive authority, corruption and inefficiency.

For this reason, cryptocurrencies (digital media used for encrypted transactions and decentralized data storage) provide them with an opportunity for empowerment and independence from nation-states.

From this perspective, El Salvador President Nayib Bukele’s appearance, via video, at the Miami Bitcoin Conference on June 5 could have seemed contradictory.

However, the organizers planned Bukele’s participation. In his speech, the president announced his government’s initiative to incorporate Bitcoin as legal currency in El Salvador, becoming the first country in the world to do so.

“We hope that this decision is just the beginning in providing a space where some of the leading innovators can reimagine the future of finance, potentially helping billions around the world,” said the president on Twitter.

We hope that this decision will be just the beginning in providing a space where some of the leading innovators can reimagine the future of finance, potentially helping billions around the world.

Bukele’s critics say the measure is not only unexpected but also unnecessary.

“The Salvadoran financial system is solid and solvent. With 13 actors (nine of them with foreign capital), it has undergone a strong expansion for 20 years, and last year it made a strong commitment to services’ digitization,” said Irma Cantizzano, “El Economista” editor for Central America.

“Analysts and economists point out that it was not necessary to legalize the currency to allow transactions with it and that it poses more risks for the country. El Salvador is currently seeking an Extended Fund Facility with the International Monetary Fund (IMF) to create a sustainable path to [pay off] public debt, which almost reaches 90 percent of gross domestic product, and to obtain $1.3 billion in financing,” said Cantizzano.

“It is paradoxical that the main reason behind the creation of Bitcoin was precisely not to depend on any state, but to work around them, and that today part of the [financial] sector celebrates its adoption as a country’s legal tender,” said Ignacio E. Carballo, the Director of the Fintech Program Ecosystem at the Pontifical Catholic University of Argentina.

Carballo considers this a middle ground between those who support the more purist conception of cryptocurrencies and those who defend conventional money.

“The fact that it is accepted as legal tender does not mean that the state is centralizing this currency. Bitcoin will continue to be decentralized in all the nodes worldwide. The state of El Salvador will not have the power to issue Bitcoin or to control how it is governed in the world, as the European Union does with the euro or the United States with the dollar,” he said.

I’ve just instructed the president of @LaGeoSV (our state-owned geothermal electric company), to put up a plan to offer facilities for #Bitcoin mining with very cheap, 100% clean, 100% renewable, 0 emissions energy from our volcanos 🌋

This is going to evolve fast! 🇸🇻 pic.twitter.com/1316DV4YwT

Salvadorans believe that this policy shifts attention away from their most pressing concerns.

“People see it as unnecessary, regardless of whether it is a good or bad thing. Many people who voted for Nayib Bukele hoped that his first actions as president would focus on other issues, such as crime or water supply,” said Paty Rivas, a young Salvadoran. “At this moment, there are much more important things to address than seeing if an official currency is approved or not.”

Parliament approved the bill with no delay. “The Legislative Assembly did not discuss or analyze this bill for a day. It arrived and was approved within three to four hours. Up to now, there are more questions than answers,” Cantizzano said.

Initially, the law forced businesses to manage operations in Bitcoin if the client so wished. However, it excluded those who “encounter any relevant issue or do not have access to the necessary technology.”

The possible adoption of Bitcoin raised concern for small and medium-sized merchants who may not have the technical knowledge or support to trade cryptocurrencies. For some, the legislation is ambiguous in this regard.

“A vast majority was completely unaware of Bitcoin and didn’t understand what it is, which is why they disagreed in making it mandatory,” said Rivas. She recalled that when El Salvador adopted the dollar, both the colón [Salvadoran currency] and the dollar circulated in parallel, but no one uses the former anymore.

Finally, the law did not make the use of Bitcoin mandatory.

“Similar measures already exist in many Latin American countries; such is the case of credit card payments. In day-to-day reality, merchants end up selecting whether they accept credit cards or not. And if they do not want to accept credit card payments, it is as simple as saying that the system isn’t working,” said Carballo, who considers this part of the legislation more of a declaration of interests by the government. However, he emphasizes that making it mandatory is necessary for Bitcoin to be a legal tender.

Getting started with Bitcoin as a currency is not that simple. It is necessary to implement a minimum of technology including Internet access and cryptocurrency management tools. Bukele stated that his administration and the company Strike are developing an electronic wallet that allows the use of Bitcoin.

“It is important to emphasize that, although mobile telephony is widely extended in the country, [Internet] coverage is not 100 percent. Official data at the end of last year indicate that at least 92 percent of the population has access to 3G mobile coverage,” said Cantizzano.

Bukele said that if El Salvador attracts 1 percent of the world’s Bitcoin, it will expand its economy by a quarter. But his most prominent critics say it may put the country’s financial stability at risk.

“The adoption of Bitcoin as legal tender raises several macroeconomic, financial and legal questions that require meticulous analysis,” said Gerry Rice, the spokesman for the IMF, before meeting with the government on June 10.

The spectacle of Bitcoin fans celebrating the prospective granting of legal tender status to it by El Salvador’s authoritarian President (he only just extended his executive authority over the country’s central bank) must have F.A. Hayek rolling in his grave! 1/2

“The spectacle of Bitcoin fans celebrating the prospective granting of legal tender status to it by El Salvador’s authoritarian president (he only just extended his executive authority over the country’s central bank) must have [Friedrich] Hayek [one of the main exponents of the Austrian School of Economics, opposed to state control] rolling in his grave!” said George Selgin, a monetary economist and historian, on Twitter.

Selgin believes that this initiative does not have an economic foundation but is another authoritarian advance by Bukele on Salvadoran institutions.

Bukele recently removed members of the Supreme Court who opposed his decrees. Some believe the young president is setting his press agenda with the Bitcoin move.

«Previous Post
What The Heck Is A SPAC And Why Are Israeli Companies So Keen On Them?»Next Post
Go Green: Pistachios Make A Healthy Snack