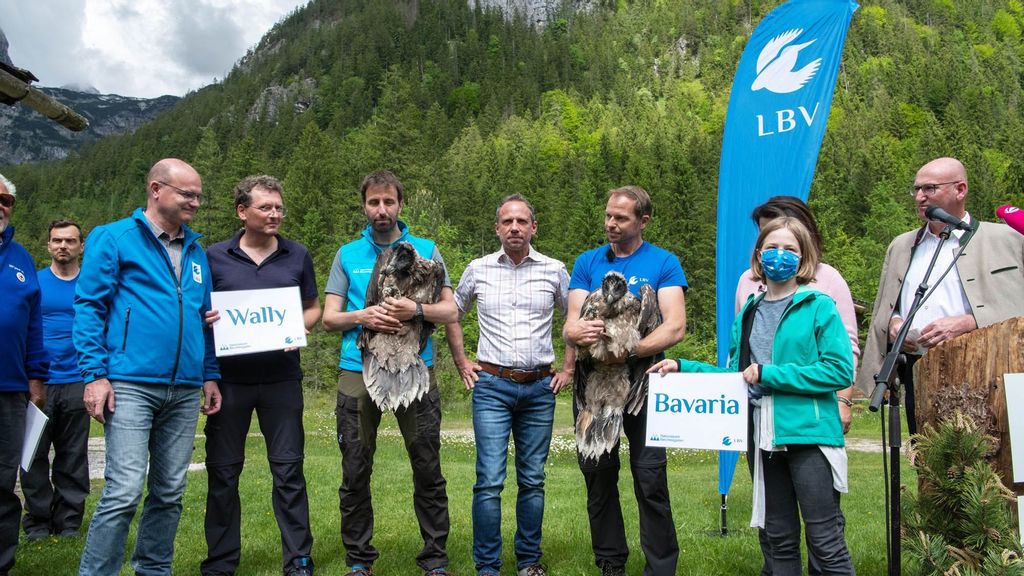 The preservation team with the two bearded vultures in the Berchtesgaden National Park in Germany. (Hansruedi Weyrich, LBV/Zenger News)

An Alpine range in Germany is now home to two female bearded vultures for the first time since they were eradicated in the area 140 years ago.

The Berchtesgaden National Park, located in southern Germany near the border with Austria, welcomed the pair on June 10.

The bearded vultures, Wally and Bavaria, are about 100 days old and were born in the Andalusian breeding station in Spain, run by the Vulture Conservation Foundation as a part of the EAZA Ex-situ Programme.

The two birds are supposed to strengthen the Central European population of the species and close an important geographical gap within the next 10 years, according to the State Association for Bird Protection in Bavaria that supports the project.

“This is a historic moment for species protection in Germany and a real milestone. The largest bird in the Alps returned to Bavaria today,” said association chairman Norbert Schaffer.

In addition, the Bavarian Environmental Minister Thorsten Glauber said the ministry will invest roughly $740,000 in the project over the next three years.

Because they are not yet able to fly, the two vultures were carried up in the mountain by a small team of national park employees who placed the birds in specially designed boxes. (Such birds generally start making their first flights when they are 120 days old.)

“After the successful climb, we placed Bavaria and Wally in nests made of spruce twigs and sheep’s wool which we prepared in advance. Then we attached GPS transmitters to them, and they were examined again. Then we withdrew to allow the two vultures to get used to their new home,” said Ulrich Brendel, project manager.

Bavaria and Wally’s nests are placed on a 10-foot large rock which is located 4,265 feet above sea level and was selected by national park experts.

The birds will continue to live without human contact, monitored by scientists in the natural park’s observation site through a live stream enabled by IR cameras.

“This will allow us to recognize irregularities immediately, so we can offer the birds optimal protection,” said Toni Wegscheider, project manager, State Association for Bird Protection. In addition, “the vultures will be given fresh food while they are asleep, so they do not associate it with anyone,” said Brendel.