US Government Is Open, But Flag Day Provides Plenty To Celebrate

From the Revolutionary War to the Civil Rights Era and beyond, the American flag has acquired layer after layer of new meanings. 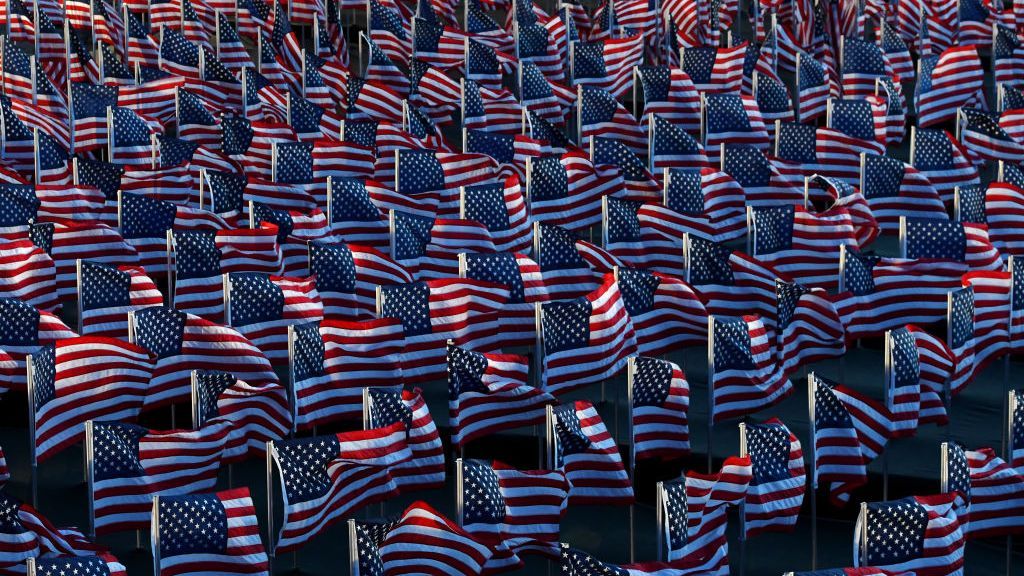 American flags decorate the Field of Flags at the National Mall near the U.S. Capitol early morning ahead of the inauguration of U.S. President-elect Joe Biden on January 20, 2021 in Washington. (Photo by Stephanie Keith/Getty Images)

Sandwiched between Memorial Day and the Fourth of July, Flag Day isn’t officially a federal holiday. But presidents routinely issue proclamations every June 14 calling for the display of the U.S. flag, even as the government stays open and the flag itself acquires new layers of meaning.

President Joseph R. Biden declared on Friday that Monday would be Flag Day again, and called on Americans to recite the Pledge of Allegiance. More than a century ago, in 1916, Woodrow Wilson picked the date to commemorate a moment in 1777 when the Second Continental Congress paused writing the Articles of Confederation to approve the first American flag design.

They called for 13 red and white stripes and the same number of stars, “white on a blue field, representing a new constellation.” Today Americans wave a 50-star flag but the stripes remain untouched, pointing back to the colonists who rebelled against the British crown. Before the Declaration of Independence, each colony flew its own flag.

It took Congress until 1949 to officially approve Flag Day with a bill that Harry Truman signed into law.

American University history professor Allan Lichtman told Zenger News that the holiday’s importance is tied to the emergence of a common nation in the middle of the Revolutionary War. “This was kind of the first recognition, symbolically, through a flag, that there was now a United States of America, and not just individual states,” Lichtman said.

The flag has been an inescapable symbol of that unity at critical moments in American history, beginning in the War of 1812 when Francis Scott Key saw it flying, in tatters, over Fort McHenry in Baltimore Harbor. The fort had endured a night-long British onslaught that Key watched helplessly from a ship carrying a truce mission.

We know the poem he wrote aboard that ship, “Defence of Fort McHenry,” as the lyrics to America’s national anthem.

The U.S. flag is the centerpiece of one of the most reproduced photos in history, Joe Rosenthal’s image of U.S. Marines raising it atop Mount Suribachi on the island of Iwo Jima during World War II. Rosenthal, an Associated Press photographer, was rejected for military service because of his poor eyesight. He won the Pulitzer Prize for capturing what few Americans know was the second flag hoisted atop the mountain on Feb. 23, 1945, during just the fifth day of a month-long battle.

“To get that flag up there, America’s fighting men had to die on that island and on other islands and off the shores and in the air,” Rosenthal would write in 1955. “What difference does it make who took the picture? I took it, but the Marines took Iwo Jima.”

The Austrian-born sculptor Felix de Weldon was an active-duty American sailor when he made a three-dimensional version of Rosenthal’s picture in clay. It would take nine years to turn that into the 100-ton Marine Corps War Memorial near Arlington National Cemetery. De Weldon’s 2,000 completed works include a bust of John F. Kennedy at the Kennedy Library and one of Elvis Presley at Graceland.

The American flag’s importance transcended military power during the Civil Rights Movement, as African-American protesters carried it along the length of a five-day, 54-mile march from Selma to Montgomery, Alabama. Martin Luther King Jr., Rosa Parks and James Baldwin walked alongside it, even as the battle flag of the Confederacy competed for attention in some places.

And as the world watched Neil Armstrong’s first steps on the moon in 1969, America boasted its technological victory over the Soviet Union with a flag that Apollo 11 astronauts brought with them to plant in the lunar dust, untroubled by gravity.

Burning the flag during the Vietnam War made it a political football. A 1968 federal law banned its desecration, but the Supreme Court struck it down two decades later as a violation of free-speech rights.

Politics has continued to follow the Stars and Stripes. A “thin blue line” version, in black and white with a single blue stripe, briefly served as a counter-protest in support of police officers after deadly shootings in 2016. Nike in 2019 abruptly stopped selling a shoe that included an embroidered Betsy Ross flag, the version featuring 13 stars in a circle, because former NFL quarterback Colin Kaepernick claimed it was a symbol of a racist, slave-holding era.

Commentators flooded Twitter with images of three giant Betsy Ross flags hung from the West Front of the U.S. Capitol as Barack Obama took his presidential oath in 2009, and again in 2013.

Lichtman said the American flag should not be a source of division.

«Previous Post
Tough Nut: Nurse With A Mugger’s Bullet In His Brain For 10 Years »Next Post
Risky Practices Caused Australian Coal Mine Explosion