Seeding Taste: The Versatile Achiote Is Touted As The Latino’s Saffron

Cochinita pibil is one of Mexico’s many traditional dishes, and achiote is its secret ingredient.
By Carlos Moron June 14, 2021
Facebook
Twitter
Linkedin
Email 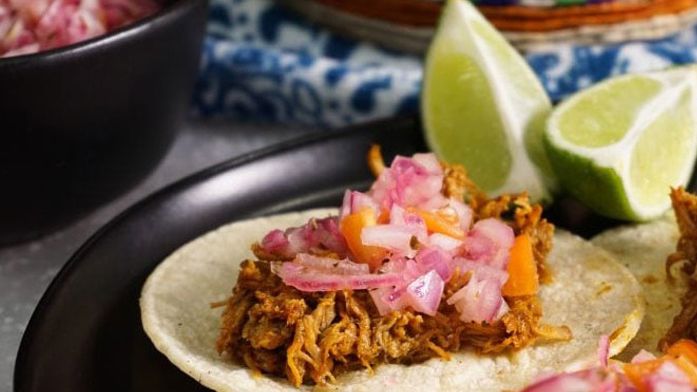 In Southern Mexican cuisine, achiote is a common ingredient. It is a seed that colors and flavors the region’s traditional dishes, such as cochinita pibil.

“I use achiote to make my family’s favorite dish, the cochinita pibil. It is the pork’s best seasoning. I usually buy pork thigh, since it is a lump of juicy meat,” said Marina Ortiz Sánchez, a housewife in Veracruz, Mexico.

Achiote is one of the most essential condiments in the region. It comes from a plant found in the warmer climates of Mexico and Central America.

When the achiote fruit blooms, the seeds are removed and ground down. They give a reddish tone and flavor to the dishes.

“Achiote paste is readily available at supermarkets and grocery stores. To make cochinita pibil, melt the achiote paste with orange juice and water, and to maximize its flavor, I recommend adding some black pepper and salt,” said Ortiz Sánchez.

“The paste should then cover the whole meat, previously diced. I then cook it for 45 minutes in a pressure cooker. Once ready, shred the meat and make tacos out of them. Eat them with red onion and habanero pico de gallo,” she said.

In other parts of the world, achiote is also known as urucú, bijol, annatto and onoto.

Central America’s foremost culture, the Mayans, found that ground achiote seed was the perfect color to dye their fabrics deep red. It is now part of its local gastronomy and renowned international chefs use “the Latino’s saffron.”

Achiote seeds are tough and need to be ground. During their pulverization, people add water or oil to compact them in a paste.

A company is dedicated to making and packaging the paste for sale. The product is readily available in supermarkets and grocery stores. Mexican gastronomy would not be the same without it.

“Achiote is necessary to make one of the most outstanding dishes in Mexican gastronomy, the pibil. It is made with pork. It is traditionally cooked in a hole in the ground filled with hot stones,” said Elvia Prieto Mendoza, a graduate of the Bachelor of Gastronomy, at “Le Chef College” in the city of Boca del Rio, Veracruz.

“The meat must be rubbed with the achiote paste before putting it in the hole, covered with banana leaves [and cooked] for more than an hour. The seasoning can also be used on beef, chicken and even seafood, enhancing their flavor. It is versatile.”