Tough Nut: Nurse With A Mugger’s Bullet In His Brain For 10 Years

Sebastian Bravo, who was 17 when he was shot, has successfully moved forward and chosen to help others. 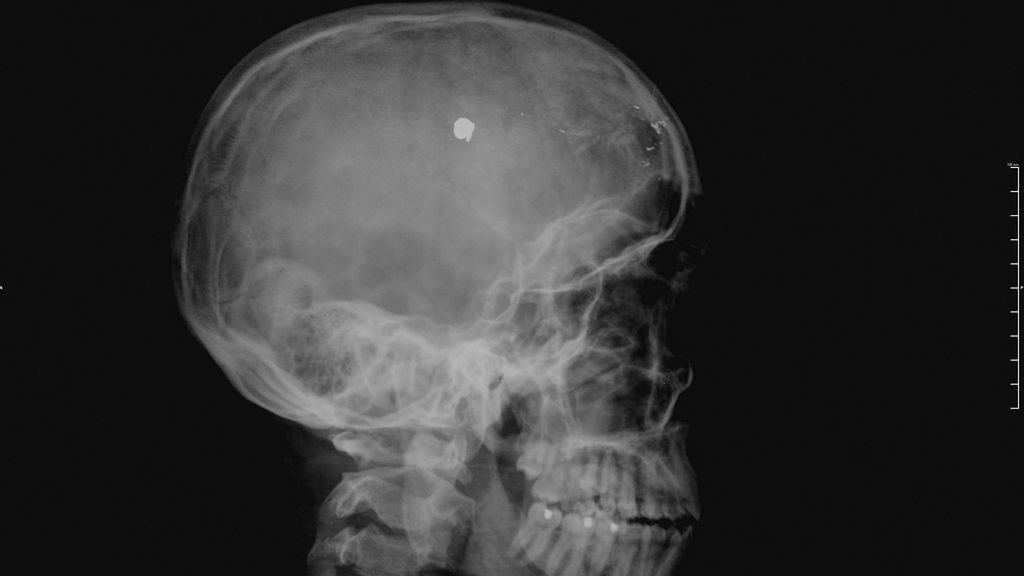 A teen who was shot in the head by a mugger 10 years ago still lives with a bullet lodged in his brain.

Sebastian Bravo, now 27, works as a nurse in Argentina.

X-rays show the bullet that has been lodged in his head since he was shot by a stranger while waiting for a bus in Moreno, Argentina, on Sept. 15, 2011.

It was at that point that Bravo’s life changed.

“When he shot me, I couldn’t feel anything,” Bravo said. “I spent a split second that felt more like an hour trying to understand what had happened. Then I saw the shooter and his three accomplices running. That’s when the blood started dripping down my face.”

Sebastian ran for several blocks looking for help until a car pulled over and a couple drove him to a private clinic.  During the journey, he asked a woman in the car to hold his hand, not because he was afraid but because he knew that he should avoid falling asleep. He asked her to wake him if his grip loosened.

The man and woman drove him to a private clinic where X-rays located the position of the bullet, and someone called his family, Bravo said.

Despite having spent several hours with the bullet lodged in his brain, Bravo said he was conscious and did not feel dizzy.

When his family arrived, he started making jokes.

“I told my mom I could see the light, and that I could hear my grandmother calling my name,” he said.

He was transferred to a public hospital, where surgeons operated on him.

“When I woke up from the operation, my head was bandaged up and the doctor told me that they weren’t able to remove the bullet. It was lodged in a part of my brain that complicated the operation,” Bravo said.

The doctor said the bullet was lodged near the cerebral falx and if anything went wrong when moving it, serious damage could be done to his brain. The surgeons decided it would be safer to leave it in place, Bravo said.

A week after being discharged, the effects of the shooting emerged.

“I began to suffer from severe headaches. They were so bad I could barely sleep. I wanted to die,” he said.

He suffered for two months until doctors gave him powerful painkillers, which he said allowed him to regain some sort of normalcy. But doctors told him that practicing contact sports was too risky for him, since a hit to the head could dislodge the bullet. That was another blow for Bravo, a Taekwondo enthusiast.

“When the doctors told me this I felt broken. Taekwondo was a huge part of my life,” he said. “I had my own students, and I loved it. But it was a precaution I had to accept.”

He said that apart from giving up Taekwondo, his life is now relatively normal. On occasion, the metal detectors at airports go off — and he wonders if it’s due to the bullet in his head.

He no longer suffers from debilitating headaches, and he has no plans to have the bullet removed, although he does not rule it out at a future date if the headaches return.

Bravo finished school and decided to rebuild his life by embarking on a career In nursing.

“After what happened to me, I realized how important nurses are.”