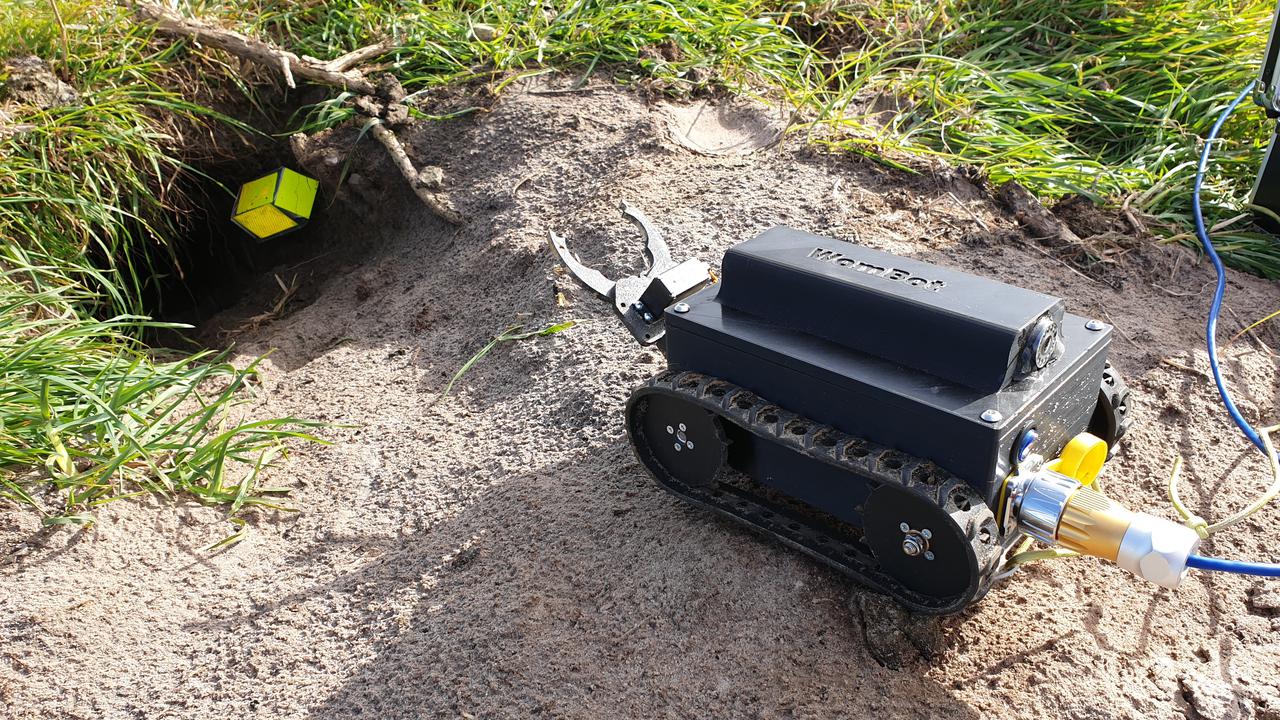 HOBART, Australia — Scientists in Australia have developed a remote-controlled robot named Wombot that can explore deep into wombat burrows.

The robot, which is about a third of the size of an actual wombat and moves on tank-style tracks at speeds of up to 500m per hour, has ventured into 30 different caves in the Tasmanian bush.

It is fitted with temperature and humidity sensors, front and rear cameras, and a gripper “paw” designed to retrieve other data-collecting devices. Wombat burrows can be more than 20m deep, filled with twists and branching tunnels. Field teams now attach the Wombot to a long rope after one prototype got stuck in the mud.

Dr. Robert Ross from La Trobe University built the robot during Melbourne’s extended lockdown in 2020 and constructed three prototypes before he made one that could survive burrow conditions.

“Burrows are pretty difficult environments to go through, with steep, sharp turns,” he said.

Scientists at La Trobe and the University of Tasmania use Wombot to determine whether burrow conditions help spread the parasitic mites that cause sarcoptic mange. This disease can eventually kill wombats.

Wombat populations in some areas of Tasmania have declined by more than 90 percent due to mange outbreaks, and the disease is also reducing mainland populations.

“The big issue wombats are facing is mange caused by mites, and we think they are shared between different wombats in their burrows,” Ross said.

It’s thought wombats spread the mites when they move to different burrows, which they tend to do every four to ten days. Wombot’s sensors have recorded an average temperature of 15 degrees and 85 percent humidity inside the burrows – almost ideal conditions for the mites to survive for up to three weeks.

In the future, the robot could be used to temporarily heat the burrows to kill the mites or even to dispense insecticide.

Wombot has only encountered one actual wombat on its journeys so far, and it was asleep.

“We quickly backed away and left it alone… we didn’t want to disturb it,” Ross said.

The development of the robot was first published in the journal SN Applied Sciences.

“Given the widespread disease and mortality that mange has brought to wombats, it is important to understand the conditions where the mites that cause this mange is most prevalent,” the study published in the journal SN Applied Sciences states.

“Since wombats are nocturnal and live in burrows which they share, the conditions within these burrows may unlock important information on the spread and severity of mange on a wombat population. These burrows tend to be relatively small, moist, have sharp turns, and steep inclines – all of which make studying them a difficult prospect.”