The death of Asian elephants in the northeastern state of Assam has raised concerns.
By Pallavi Mehra June 11, 2021
Facebook
Twitter
Linkedin
Email 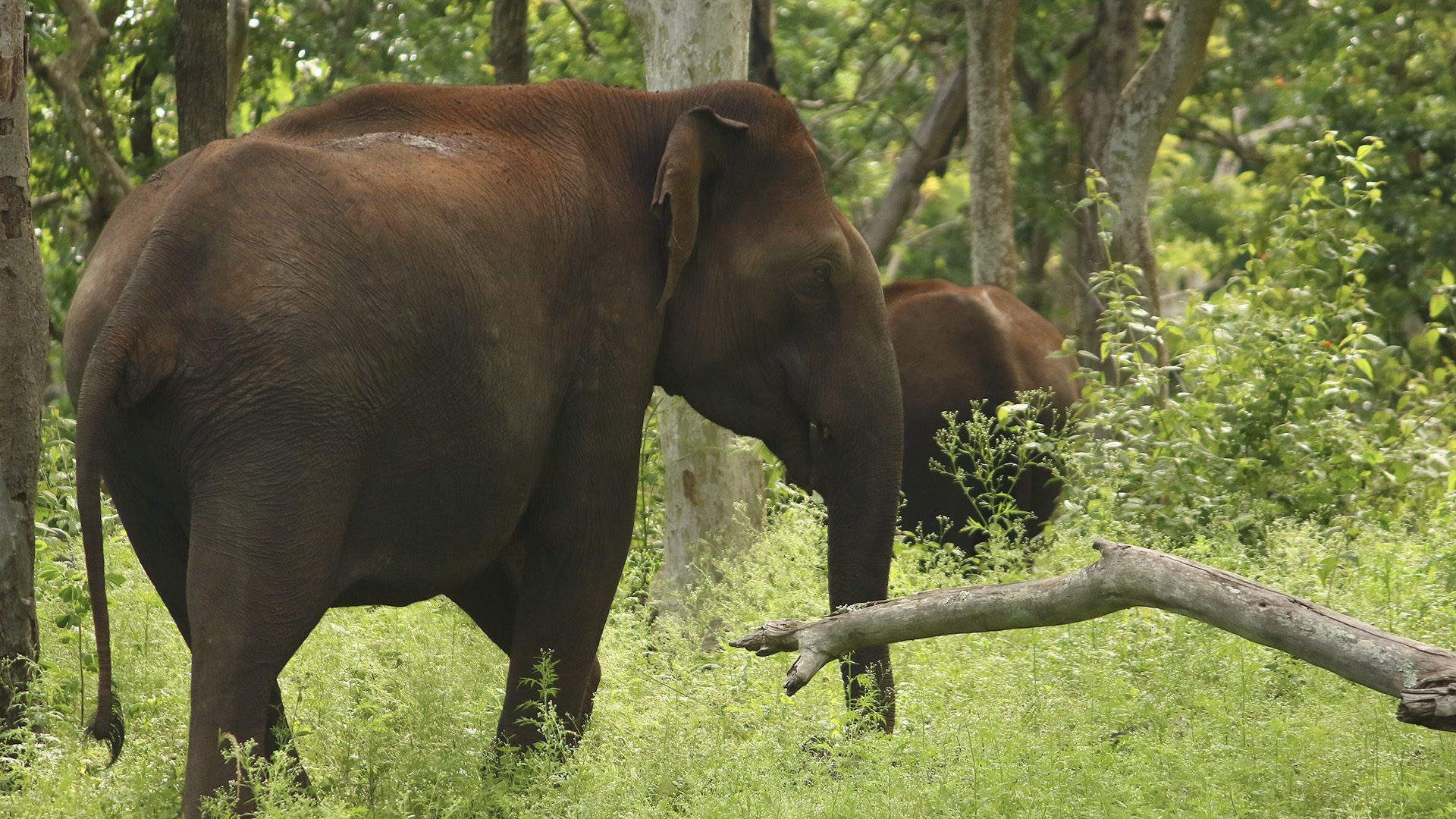 Representational image: Eighteen wild elephants lay strewn on a hill in the Kondoli proposed reserve forest in the Nagaon district of India’s northeastern state of Assam after a night of intense thunderstorm on May 12. (Saketh Upadhya/Unsplash)

DELHI, India — Eighteen wild elephants lay strewn on a hill in the Kondoli proposed reserve forest in the Nagaon district of India’s northeastern state of Assam after a night of intense thunderstorm on May 12.

“A lot of trees were burnt due to the lightning strike, but we didn’t know that elephants have died and that too so many,” Binod Dulu Bora, field director, Hati Bondhu, Nagaon, told Zenger News.

The non-governmental organization, called Friends of the Elephants, is based in Nagaon and works to mitigate human-elephant conflict in Assam and improve elephant food security through its plantation programs.

“I got to know about the incident through a local. This is the first time I have experienced anything like this. Never before have elephants died on such a large scale,” Bora said. There were five calves among the dead. 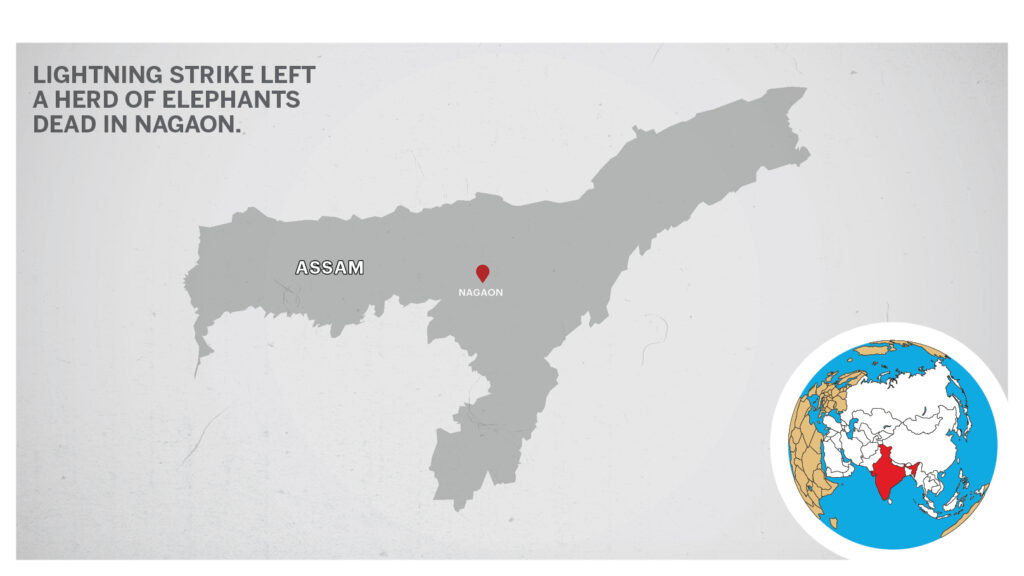 Forest officials said the elephants died due to electrocution caused by thunderbolts, but a detailed inquiry was launched to find out if there was any other reason. The post-mortem report, which came three weeks later, reiterated the initial findings.

“18 elephants’ death due to lightning has been established with clinching evidence,” Parimal Suklabaidya, the minister of excise, forest, environment, and fisheries, Assam, tweeted.

“The exhaustive report incorporating post-mortem and reports from concerned agencies have proved beyond doubt that lightning caused the death of a herd of elephants,” the tweet read.

Four elephant carcasses were found on the foothills, and the rest were found half a mile uphill. Dissatisfied with inquiry and post-mortem findings, Nature’s Beckon, an environmental organization, has called for a scientific investigation.

“The investigative committee had no lightning experts, electrical engineers, geo-physicists, forensic experts, crime branch personnel, and consisted of only veterinarians — all of whom are directly or indirectly related to the [state forest] department,” Soumyadeep Datta, director at Nature’s Beckon, told Zenger News.

Datta said that there were no local representatives in the committee, and the tests were not done through independent labs.

Bora, too, says they initially thought there could have been some other reason.

“But a tree on the side was split into two, and its leaves were burnt. It was raining heavily, and the soil was all wet,” he said.

A synchronized census throughout India in 2017 found 27,312 elephants. Assam has around 5,719 elephants — the highest after southern state Karnataka, which has 6,049.

The census indicated that though there has been a decline in the overall elephant population from 29,391-30,711 in 2012, “it is only due to a difference in the counting method”.

Assam is divided into 34 forest divisions. The elephant population in the Nagaon forest division decreased from 140 in 2010 to 79 in 2017, according to a report by the Asian Elephant Specific Group.

Assam is a crucial conservation area for the endangered Asian elephants in India, but human-elephant conflicts have been common.

“Until a few decades ago, Indian elephants traveled across a seamless stretch of forest from Uttarakhand to Assam,” Gauri Maulekhi, Trustee, People for Animals, told Zenger News.

“Now, due to fragmentation and urbanization, not only are they confined in small areas, but the gene pool availability has decreased, making them inbred. Increased conflict is also a natural consequence of human activity in traditional forest areas.”

Maulekhi claims that it is not unusual for farmers to leave live wires in their farms to kill wild animals. In the event of rain, entire fields can become death zones.

Bora, who has been working for saving elephants for 11 years, shares examples.

“There have been a lot of cases where elephants have lost their lives due to humans. About five years ago, Udmari district villagers fenced their agricultural lands with electric wiring, killing many elephants. Those locals were jailed.”

Bora shared another incident where he removed electric wires with his hands to make way for elephants.

“It is estimated that 100 elephants lose their lives due to conflict with humans annually,” said Kartick Satyanarayan, co-founder and chief executive of Wildlife SOS.

“Poaching, train accidents, road accidents, and poisoning are other reasons for elephant deaths in India.”

“It is unfortunate that elephants have been cornered due to shrinking forest lands. This is why we are experiencing incidents of rising human-elephant conflict. In search of food, elephants are often forced to venture into human habitations, and the residents resort to aggressive or retaliatory means to keep them away.”

Bora believes if the elephant population keeps on decreasing at this rate, there will be no elephants left in India in another 30-40 years. He says the only solution through which such incidents can be prevented is through large-scale tree plantation.

“When lightning struck, the forest area wasn’t very dense, and the canopies of trees were not thick. Hence, it led to this incident. If the forest cover were dense, the 18 elephants would have been roaming in the jungles.”