Different authorities and organizations came together to bust myths and motivate people to get vaccinated.
By Rishabh Jain June 11, 2021
Facebook
Twitter
Linkedin
Email 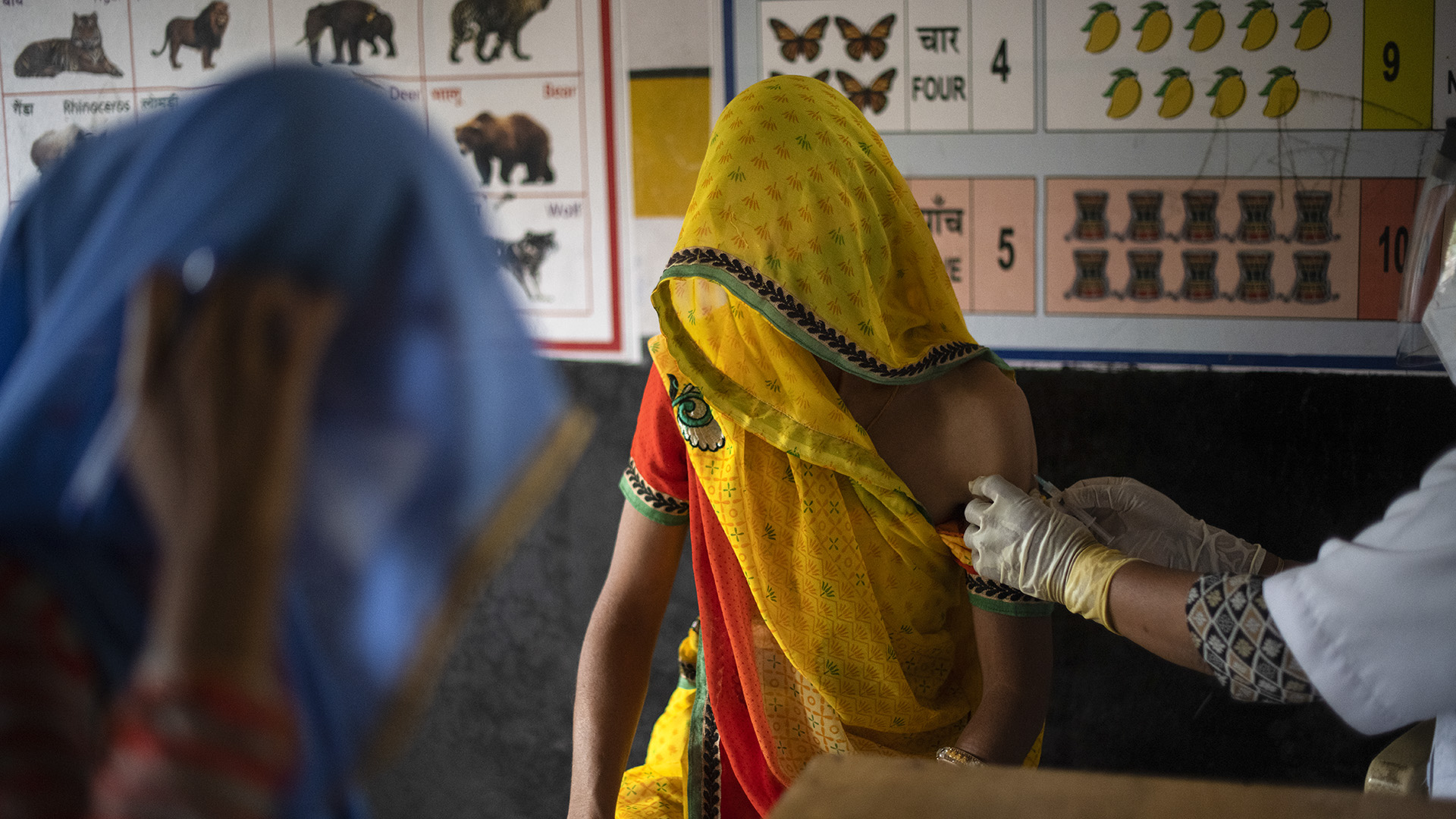 NEW DELHI — Aparna Sen, a 48-year-old homemaker, came back from a Covid-19 vaccination site in Rajkot, a city in India’s western state of Gujarat, with localized pain in the vaccination site as well as a gold nose ring and a hand blender.

“There was some hesitancy initially regarding the vaccines as some messages were being circulated on WhatsApp that you will get a fever or might die two years after taking jabs,” Sen told Zenger News.

She says she knew those weren’t true but wasn’t “sure what to do”. But when the second wave started approaching, she said she knew they had to get the vaccines.

One day an advertisement in a newspaper caught her attention. The ad claimed all those getting vaccinated at the site she visited would get a gold nose ring or a hand blender.

“The gifts motivated us in the sense that apart from a free vaccine, we will also be getting something else. My husband and I got it done the next day, and we received a nose ring and a hand blender. It was good to see someone doing this much.”

India started its inoculation drive in January. Despite complaints of vaccine shortage and unavailability of vaccine slots, there have been cases of vaccine wastage. And, one of the reasons for wastage is vaccine hesitancy, mostly in India’s rural and tribal communities.

As the second wave of coronavirus started wreaking havoc, with a total of 6.6 million cases being recorded in April and 9.03 million cases in May, the importance of vaccines was soon realized.

The pressure mounted on the central and state governments to ramp up the vaccination drive. The authorities soon started having discussions with influential people in their communities to suggest ways to bust the myths around vaccines.

At this time, Arvind Pathak, chairman of the Suvarnkar Ekata Samiti, came up with the idea of distributing gifts to people to motivate them to get vaccinated.

“I told authorities that my camp would be innovative as I will distribute gold nose rings to women and hand blenders to men if they get vaccinated,” Pathak told Zenger News.

“People focus less on what doctors and scientists say, but more on myths spreading on social media. I aim to motivate more and more people to get vaccinated.”

He said that this idea really worked as on the very second day when the news of the gifts spread among the people, the staff at the vaccination center had to be doubled.

They ran out of vaccines on the third day.

A total of 701 gold nose rings and 630 hand blenders were distributed in two days at the camp. Pathak told Zenger News that when such a camp is organized, and he is asked to coordinate, he would distribute silver currency notes.

Gujarat is not the only state where people are coming up with innovative ideas to motivate people to get vaccinated.

Bakharwadi, a crunchy snack made up of wheat flour, gram flour, and other ingredients, is an integral part of the Pune culture.

“We had the ambitious goal of vaccinating 100,000 people per day and, for that, we came up with this idea of distributing bakharwadi at random vaccination centers across Pune,” Indraneel Chitale, partner at B.G. Chitale Group, told Zenger News.

“First day [of vaccination] only 40,000 people came to get vaccinated. However, the number went up to 70,000 per day after that [as news of snack distribution spread].”

However, as the problem of vaccine shortage kicked in, they could not increase the number of daily people getting vaccinated.

In the very first week, Chitale was able to distribute 15,000 packets of bakharwadi across Pune. He said that once the vaccine supply gets back to normal, the group will increase distribution to motivate those who hesitate to get vaccinated.

The snack distribution was done at hospitals run by the Pune Municipal Corporation and in the areas where the literacy rate or the affluence rate was a lot lower.

Chitale said that these were the areas where there was a lot of apprehension about taking vaccines. Therefore, the initiative had a great effect on increasing the number of people getting vaccinated.

A similar drive took place in Kovalam, Chennai, where a plate of biryani was given to everyone who came to get vaccinated. A lucky draw for a gold chain, washing machine, a mobile phone was also arranged.

Aqsa Shaikh, who is a Nodal officer at a Covid care center in the capital city of Delhi, believes that the idea of giving freebies along with vaccines motivates people to get vaccinated.

When these schemes were started, they were for people more than 45 years of age who were not required to book online slots and could walk in at inoculation centers.

Shaikh says they have been making community-specific videos and trying to bust myths around vaccines.

Authorities the world over are fighting ways to cope with vaccine hesitancy.

Authorities and companies in the United States are also coming together and distributing freebies to get more and more people vaccinated.

The Ohio Department of Education took to Twitter to announce a lucky draw for a four-year scholarship in any Ohio State University for those between 12 and 17 years of age for getting vaccinated.

Ohio Governor Mike De Wine also announced on Twitter that all residents of Ohio who got their first vaccine jab would be eligible to participate in a lucky draw competition where five lucky winners would get a cash prize of $1.5 million.

West Virginians can win one of five hunting rifles or a customized truck. Other US governors also offered freebies to entice the unvaccinated to get jabs.

The famous doughnut chain, Krispy Kreme, has also announced that a free ‘original glazed’ doughnut would be given every day to all those who get vaccinated. Even Budweiser announced a free beer for vaccinated people above the age of 21.

In Michigan, a legal marijuana dispensary, Greenhouse of Walled Lake, decided to give one pre-rolled joint for free to people above 21 who can show their vaccination certificate.