Popcorn With Zenger: ‘The Conjuring: The Devil Made Me Do It’ Doesn’t Summon Up Any Horror

Franchise's latest installment a formulaic affair that gets the story from A to B without generating much excitement.
By Jacob Smith June 10, 2021
Facebook
Twitter
Linkedin
Email 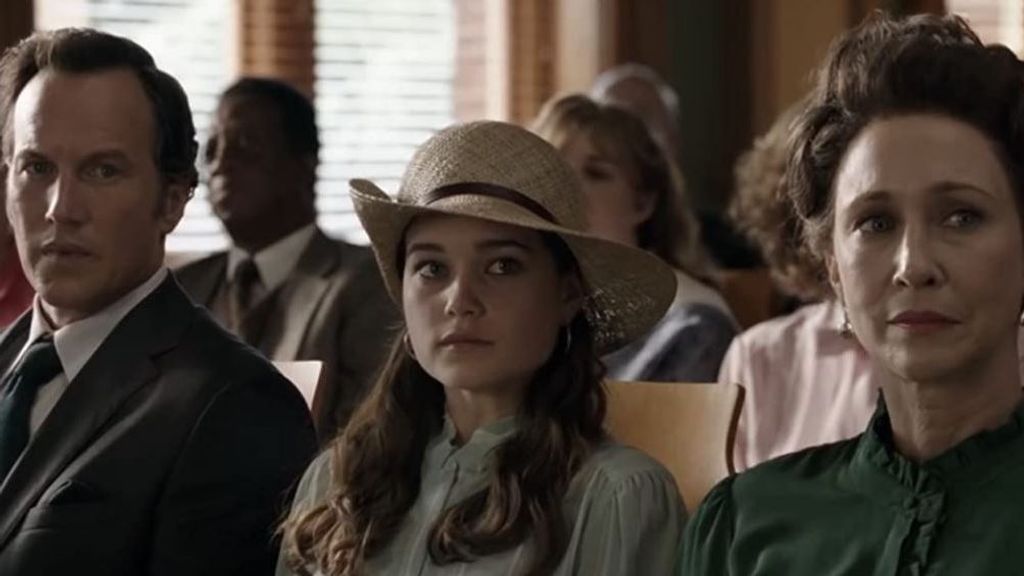 Patrick Wilson, Sarah Catherine Hook and Vera Farmiga in the latest installment of “The Conjuring” franchise. (Courtesy of Warner Bros.)

For the first time since 2016, Warner Bros. is back with the latest entry in “The Conjuring” series. Unfortunately, there apparently isn’t much juice left in the franchise.

Most moviegoers probably don’t know that “The Conjuring: The Devil Made Me Do It” is the eighth installment in the series. Nonetheless, the payoff to the studio has been impressive: the films have cumulatively grossed almost $2 billion dollars at the global box office, against a combined budget of $178 million.

The problem with creating a series of films in the horror genre is the excitement can only be sustained when the series delivers on fright. After seven films, there isn’t much to this series that you haven’t already seen in such earlier installments as “Annabelle,” “The Nun,”’ and “The Curse of La Llorona.” This series has become less about the scares and more about the budget, which is why this latest one comes up short.

The Story: Based on the 1981 murder case in which the killer claimed he was possessed by a demon, famed demonologists Ed (Patrick Wilson) and Lorraine Warren (Vera Farmiga) document the exorcism of an 8-year-old boy named David who is possessed by a high-level demon. During the exorcism, Arne Johnson (Ruairi O’Connor), the boyfriend of the little boy’s sister, invites the demon to enter his body instead of David’s. Ed witnesses the demon transport to Arne’s body, but he has a heart attack and is taken to a hospital before he can warn the family.

While under demonic control, Arne stabs a family friend 22 times and is put on trial for murder looking at the possibility of the death penalty. Ed and Lorraine are given the seemingly impossible task of attempting to prove that Arne’s actions were not under his own control but that of the paranormal being. But if the demon gets his way Arne won’t make it to trial, so they must figure out how to stop him from claiming Arne’s soul.

Bright Spots: It is difficult to say where this franchise would be without the work of Wilson and Farmiga. The on-screen chemistry between these two carries not only this film, but the entire franchise. The couple is easy to root for and without their conflict, the movie might not even be worth a rental.

Outside our lead couple, the best aspects of the film are all on the technical side, as the set pieces are very detail-oriented from the props to the lighting that completes the unsettling tone the filmmakers desire.

Weak Spots: The fatal flaw with creating cinematic universes is that once you have established your glorified Netflix series, the only thing that matters is keeping it going. Filmmaker James Wan is the man largely responsible for the writing and direction inside the Conjuring universe, but this time around his influence has diminished with the number of projects on his plate. As Wan is confined to a producer role, the creativity has suffered, and that is why “The Conjuring: The Devil Made Me Do It” is a bland addition to the franchise.

The film plays it safe with its theme by keeping its story basic and familiar. The opening sequence is as close as the film gets to a thrilling experience, as the horror is turned down for a series known for some of the best such sequences in the past decade. Even the film’s jump scares are watered down to the point that you don’t notice the moments that are supposed to make you uncomfortable.

The supporting cast is bland and fails to do anything that enhances the movie. In fact, cutting some of these roles might have helped put a better focus on more important characters and lessened many of the film’s pacing and narrative problems.

The Takeaway: The latest “Conjuring” film set up an interesting premise, but does not know how to execute it in a fresh way that we haven’t already seen. As a result, “The Devil Made Me Do It” stands out as arguably the most lackluster film in the horror universe.

See or Skip: “The Conjuring: The Devil Made Me Do It” is a solid film but not an exciting one. Much like empty calories, you’ll get your fill, but feel empty soon afterward.