Maryland Program Helps Those Who Help Victims Of Crime 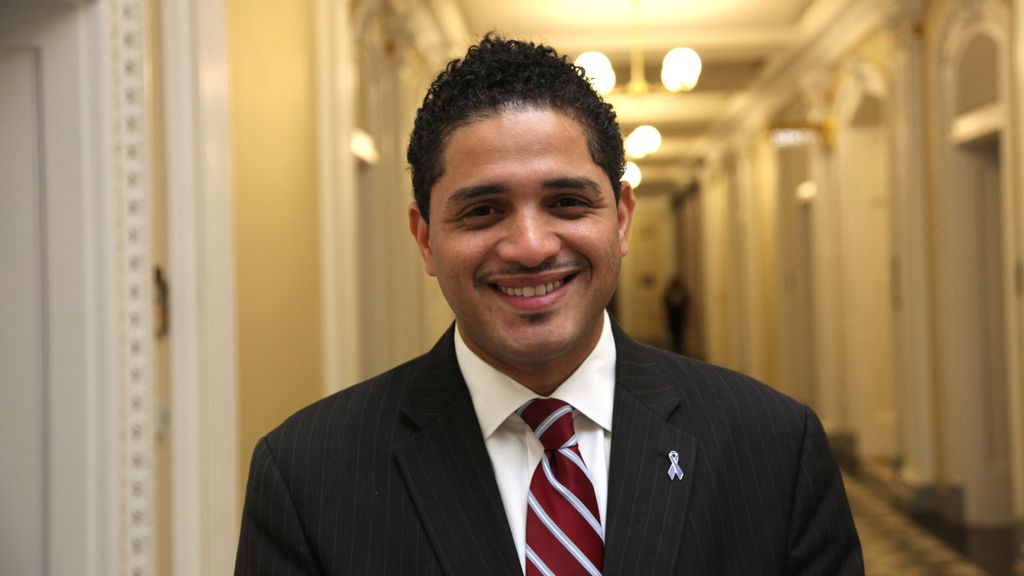 William Kellibrew, whose mother and brother were killed and his own life threatened when he was 10, is now director of the Office of Youth and Trauma Services in Baltimore. (White House photo)

BALTIMORE — William Kellibrew was 10 years old in 1984 when his mother, Jacqueline, and 12-year-old-brother, Anthony were killed by Jacqueline’s boyfriend in the living room of their home in Capital Heights, Maryland. Next, the killer approached William.

“He put the gun to my head,” said Kellibrew, who begged for his life. He was spared: The killer instead put the gun to his own head and pulled the trigger.

In the aftermath of his terrible ordeal, Kellibrew’s advocacy against domestic violence drew the attention of Oprah Winfrey and the Obama administration, among others.

Today, as director of the Office of Youth and Trauma Services in the Baltimore Health Department, Kellibrew, along with a number of his staff, took advantage of a training program offered by the Roper Victim Assistance Academy at the University of Baltimore.

The academy “provides a fundamental overview of the entire field of advocacy including victimology, victim rights and victim assistance for residents in Maryland.,” its website states.

Kellibrew shared his perspective after the first day of the five-day program: “I think that it’s important for us to educate ourselves to serve our communities and to create safer spaces for young people. We need to hear their voices to address the deep-rooted trauma that has impacted so many communities.”

The Roper Academy is named for Stephanie Roper, a 22-year-old college student who was kidnapped, raped and murdered by two men after her car broke down in a rural area of Prince George’s County on April 3, 1982.

The Roper Academy was established in 2003 to train law enforcement officers, counselors and nurses and about victims of crimes, the trauma they experience and the stress that service providers can experience.

Academy participants typically learn at a retreat center in Baltimore County, but In the wake of the pandemic, they attended online for the 40 hours required for the certificate.

Dave Thomas, with the International Association of Chiefs of Police, talked about how the time has come “to shift perspectives on trauma survivors, from disdain to one of concern.”

Lisa Ferentz, founder of the Institute for Advanced Psychotherapy Training and Education, told participants that many perpetrators of domestic violence started as victims themselves.

“Believing ‘I am bad’ sets children up for a lifetime of self-sabotaging and self-destructive behaviors, dangerous, abusive choices and relationships,” Ferentz said.

In another session, art therapist Mary Ann Hendricks distributed glue, crayons and other supplies for participants to make their equivalent of a “treasure chest” designed to teach them to manage their own trauma.

Heather Pfeifer, an associate professor in the School of Criminal Justice at the University of Baltimore, said the academy aims to bridge the gap between research and practice.

She also pointed out what might be an upside of the COVID-19 pandemic:

“COVID reinforced how wired we are for affection,” Pfeifer said. “Learning to adapt within these constraints is stress in and of itself, and that is not a bad thing. COVID was this persistent stressor, so I look at it as how can we adapt and what can we take away in terms of lessons learned.”

Debra Stanley, the academy’s executive director, said that for decades crime victims were not part of the justice system that was primarily focused on the defendant and their rights. But more recently, there has been a shift from what’s known in legal circles as retributive justice system to a restorative one, where the rights of the victim are also considered.

“Things have changed so much since the death of Stephanie Roper,” she said, “but more needs to change.”

Similar thoughts were expressed by one of the participants in the week’s training.

“I learned a lot about the human trafficking of children,” said Debra Thomas, a chaplain for the Baltimore Police Department. “They say it takes a village, but we need more people to get involved and be the village to save more children today.”