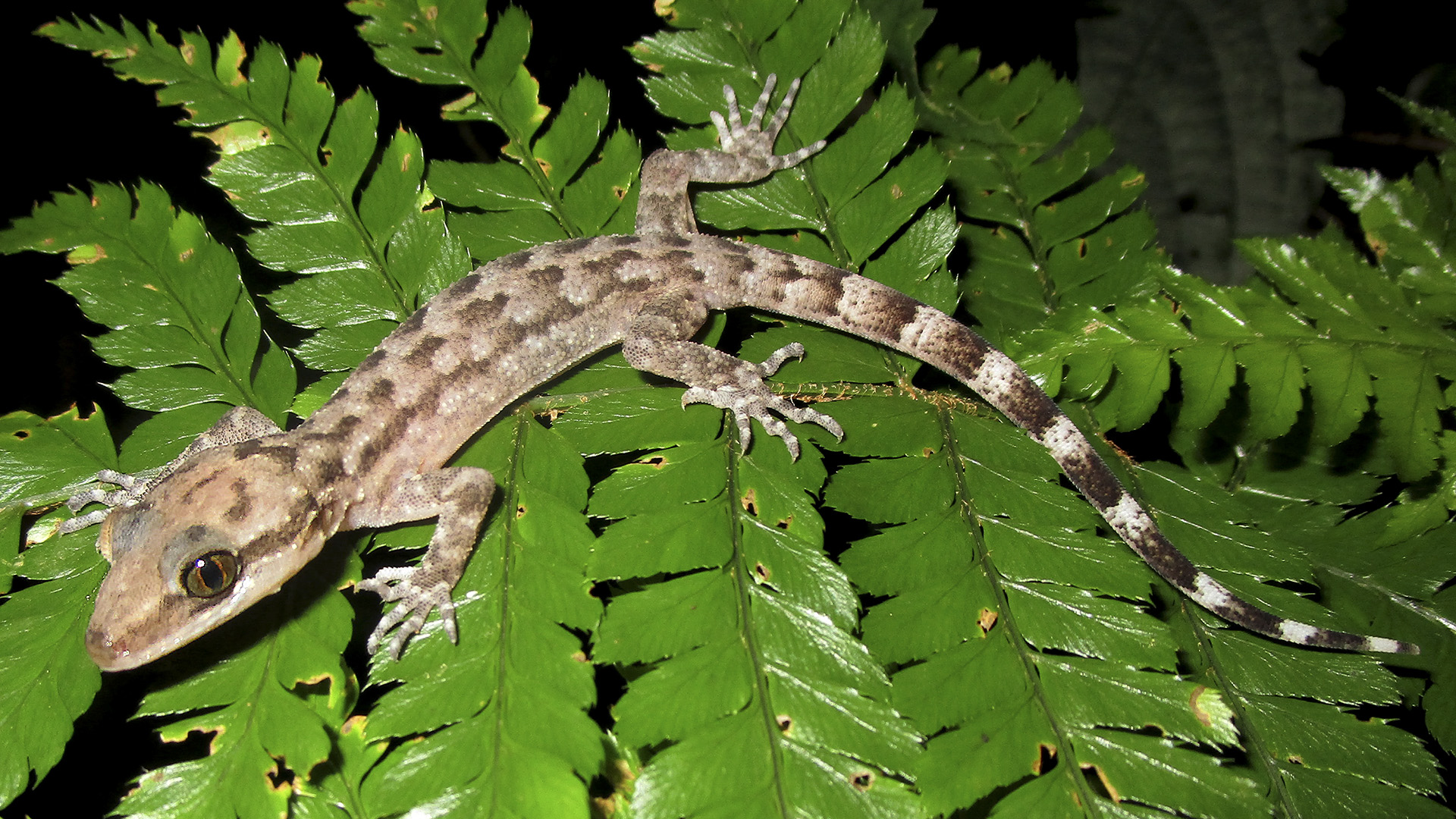 Cyrtodactylus bengkhuaiai, a species of gecko found in the forests of Aizawl, was named after Bengkhuaia, the chief of the Mizo community. (Lalmuansanga)

GUWAHATI, India — Bengkhuaia, the chief of the Mizo community hailing from the Sailam hamlet in India’s northeastern state of Mizoram, took the fight against the British colonizers and organized a community-led resistance against them.

One-hundred-and-forty-two years after his death, Bengkhuaia was honored when a species of gecko, a tiny lizard-like animal found in the forests of Aizawl, was named after him — Cyrtodactylus bengkhuaiai.

A team of researchers from the northeastern states of Assam, Mizoram, and army personnel from a military station in Meghalaya discovered four new species of bent-toed geckos.

“These four discoveries increase the diversity of Cyrtodactylus in northeast India from nine to 13 species and is important to resolve some undescribed species of Cyrtodactyus in the region,” H.T. Lalremsanga, associate professor and head, department of zoology at Mizoram University, told Zenger News. 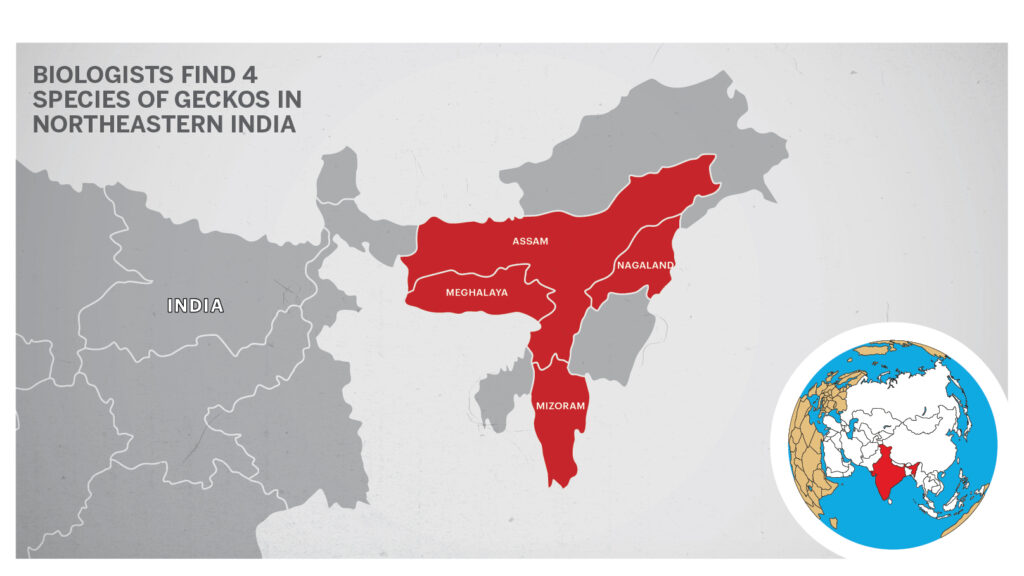 “This work highlights the biodiversity richness of the region as part of the Indo-Burma hotspot.”

The study was published in Zootaxa, a New Zealand-based peer-review scientific journal.

The genus has at least 300 described species till 2020, making it the largest among the gecko genera. Instead of possessing dilated digits like other geckos, members of Cyrtodactylus have slender, curved toes to which the common names for the genus are attributed.

Bengkhuaia, after whom one of the geckos was named, has a rich name in the historical and cultural folklore of the region.

“In 1871, he [Bengkhuaia] invaded British-occupied Alexandrapur in Assam and captured a Scottish girl, Mary Winchester, after her father was shot dead. She was rescued by a British expedition in 1872. This event marked the beginning of British rule in Mizoram that lasted till the Indian Independence in 1947. It also paved the way for Christian missionaries to introduce Christianity among the Mizos,” Lalremsanga told Zenger News.

He believes naming the species after the chiefdom is vital for motivating and supporting the awareness attitudes of the locals of Sailam village, who are protecting most of their lands for community reserve forest.

“The discovery of these new species hints at the need to explore the true diversity of the region.”

Another new species — Cyrtodactylus aaronbaueri — was collected from the Mizoram University Campus and named after Aaron Bauer, the world’s leading expert on the taxonomy of gecko lizards.

“It is a huge honor to have this species named for me,” Bauer told Zenger News.

“Northeast India has, for many decades, been undervalued as an important biodiversity spot for reptiles in general. The climate, the isolated hill ranges, and the presence of major riverine barriers and elevational gradients make it an ideal place for gecko speciation to take place.”

Bauer believes that though herpetologists are still only scratching the surface, knowledge of the geckos in that area has exploded in the past few years.

“We already know that some species can thrive even in the face of urbanization, but others do not. So, it becomes a race to recognize, describe, and protect these new species before some critical part of their habitat is destroyed. Ultimately knowing what is present — doing the kind of taxonomic work seen in this paper — is the necessary first step to effective conservation.”

The other two species — Cyrtodactylus karsticola and Cyrtodactylus agarwali — were found in the limestone caves in the Siju village of South Garo Hills in the state of Meghalaya.

“The habitat of both the species highlight the unique biogeography and steep terrain often associated with limestone areas that result in the evolution of specialized ‘karst’ [limestone] endemic biodiversity,” Jayaditya Purkayastha, a molecular biologist with a non-governmental organization Help Earth, told Zenger News.

The karst landscape of northeast India is relatively under-explored in terms of herpetofauna. Limestone from Meghalaya is a primary raw material used in the cement industry.

Since almost all the major cement plants operating in the region are located in Meghalaya, the limestone caves are vulnerable to illegal mining.

“Besides the two new species discovered during a two-day visit to Siju, an additional 48 species of amphibians and reptiles were encountered, stressing the importance of karst landscape as a refuge to rich herpetofauna biodiversity.”

The Cyrtodactylus agarwali was named after Ishan Agarwal, an Indian biologist, for his contribution to the field of herpetology in India.

“It’s an honor to have a species named after oneself, and it is great to see basic biodiversity research coming out of northeast India, an incredibly diverse and understudied region,” Agarwal told Zenger News.

“My Ph.D. on the genus Cyrtodactylus was the first broad-scale work on bent-toed geckos in India, which is in part why the authors chose this name.”

“I will have to make a trip to Meghalaya soon to see this species in the wild.”

The project was a collaboration between Help Earth’s Purkayastha, Lalremsenga from the Mizoram University, and Colonel Yashpal Singh Rathee of Umroi Military Station.