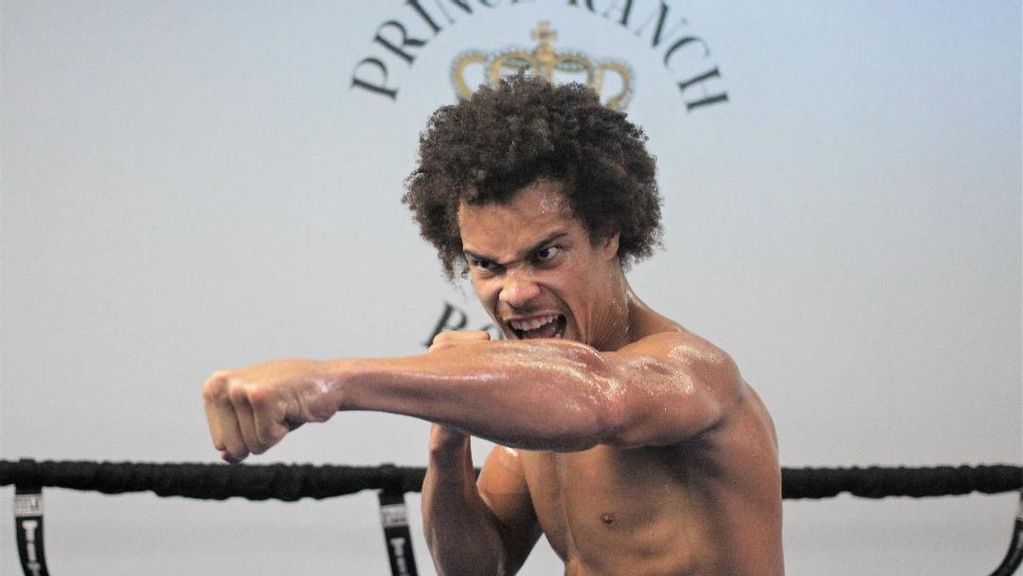 Blair Cobbs returns to the ring on June 19 against Brad Solomon. (Courtesy of Prince Ranch Boxing)

Blair “The Flair” Cobbs serenades audiences with pro wrestling great Ric “Nature Boy” Flair’s “Wooooo!” every chance he gets. For as much as he can talk with the best of them, his fists work just as well inside the ring. Boasting a 14-0-1 record, the welterweight is again ready for action after more than a year’s layoff.

The self-proclaimed “Baddest Man In Boxin”’ returns to the ring on June 19 to face his most experienced opponent to date, Brad “King” Solomon (29-3).

With a new team and new perspective on his career, Cobbs says of Solomon that he is “the only man stupid enough” to sign a contract to stand across from him. Legendary trainer Freddie Roach looks to add to the tools of the talented vocal southpaw.

“The Flair” took some time out to give Zenger News the scoop on training camp, why he is so confident of victory and much more.

Cobbs: Boxing ain’t been the same without me. It’s time for the most exciting man in boxing to get back in there and show the world what he’s all about.

Zenger: You went from four fights in 2019 to only one last year due to the pandemic. How did you use your downtime?

Cobbs: It’s been very challenging. I have conquered depression; I went through a whole lot of ups and downs in my relationship; all kinds of stuff like that. It’s one of those things that was definitely needed for me. The time challenged me in many other ways in my life.

Zenger: Not only did you overcome those obstacles, but on June 19, you get back to doing what you love.

Cobbs: Absolutely. It’s a wonderful time to be alive right now, and I can’t wait to get out there and do my thing.

Zenger: You came in at 145 pounds for your last fight. Did you miscalculate your cut?

Cobbs: I overshot it. I’m a brand-new welterweight. I was fighting at 140 for a long time, and then I had a real hard time making the weight. I actually had a bad fight because of it, just trying to make that weight. So, I had to go up in weight. It wasn’t hard making weight at all, but in that particular camp I overshot the weight.

Zenger: Do you feel like you have a handle on it now?

Zenger: Your next opponent, Brad Solomon, has double the number of fights that you have and has only lost to top guys. Why such a tough opponent after an extensive layoff?

Cobbs: Because he’s the only man stupid enough to get in the ring with Blair “The Flair.” There are a lot of people that turned down that contract, including Solomon at one point. It will be a big fight. It’s a comeback getting back in there, and there are a lot of people that believe that Brad Solomon has what it takes to beat me. It’s going to be an exciting fight with lots of drama.

Zenger: Your fights always seem to play out in a dramatic fashion. Do you feel like your ability to overcome adversity during the course of these fights is what separates you from other prospects?

Cobbs: That’s the biggest key factor. In one of my post-fight interviews, I told the whole world that I am the definition of perseverance. There is nothing that I cannot overcome. No matter what, no matter how many times you knock me down, I will get back up and win. That’s what it is. That’s the theme of Blair “The Flair’s” career. I’m getting better as a fighter, I’m continuing to develop because I actually have the opportunity to do so, and now it’s time to show up and show out.

Zenger: Solomon won a six-round decision in February against Lisandro de los Santos. Any concerns with him potentially being a bit sharper because he has not been out over a year like you have?

Cobbs: No. He paid for that little fight in Mexico and that’s good for him. But during our fight, he’s going to go through some hell. It’s going to be crazy (laughing). I’ve been training in Wild Card Gym, going through the ups and downs of training. And to tell you the truth, it’s been a fight for a whole year.

I’ve never really been out of camp and have only taken a week or two off. I sacrificed time with my family and enjoying life just to be able to be ready at all times. If there was a fight coming up, I wanted to be ready, no matter what. No excuses. Coming into this fight, I’m extremely prepared. I got a whole new bag of tricks, baby. I have been developing new skills, growing as an athlete, growing as a professional, and it’s going to pay dividends come June 19.

Zenger: Solomon has a significant advantage in the experience department, but your last five opponents have a combined record of 63-7, so you have been in with stiff opposition. Do you feel that will help make up for the lack of experience on fight night?

Cobbs: The thing is, they put me in there with a bunch of guys where people think I am going to lose, and I upset them. It’s been a theme. It gets me up in the morning. I looked at some interviews and stuff, and they’ve been saying Brad Solomon has the potential to beat me. That got me up in the morning excited to box. It ain’t fun until you’re fighting the odds. No one else is doing it like Blair “The Flair.” No one is fighting undefeated fighters; nobody is fighting against the odds, and that’s just what it is. That’s what brings a lot of fans to want to come see me. I inspire millions of people doing so.

Zenger: You fight like a guy that’s in there to win, not in there not to lose.

People have been caught up in this [Floyd] Mayweather-generation thing where people don’t really want to put their zero losses on the line or be in there with competition they could lose to. They don’t want to face the odds. I have that kind of courage, to face the odds and beat the odds. There are not many fighters nowadays that’s doing that. I love doing it and that’s where I grow the most.

Zenger: All three of Solomon’s losses are to undefeated fighters. What do you have to do to keep his unlucky streak going?

Cobbs: I gotta be smarter, faster, stronger and all-around better. Brad Solomon has a lot of experience. I’m not overlooking him at all. I expect the 2012 Brad Solomon to come out at fight time. Every time I get in that ring, the best of that fighter comes to fight. I’m bringing out the best in these fighters, and I’m extinguishing their flames.

Cobbs: It was just the right fit, and it was perfect timing. I made the adjustments in camp. We’re working very well together. I went through the ups and downs, I started at the bottom of the barrel, and now I’m the cream of the crop. You’re not great until you rise to the top against great opposition. In that gym, I have gone through many obstacles and trials and tribulations. That’s just in the training, so I’m already used to this. I’m not new to this, I’m true to this.

Zenger: Good to have you back in the ring on June 19, and good luck to you. Is there anything else you want to add?

Cobbs: Everyone stay tuned for the greatest ass-whooping in 2021 on DAZN network on June 19. Meantime, You can check me on Instagram, Twitter, Facebook @blairtheflair for more exciting content; www.blairtheflair.com. Woooo! Nobody does it better, baby!