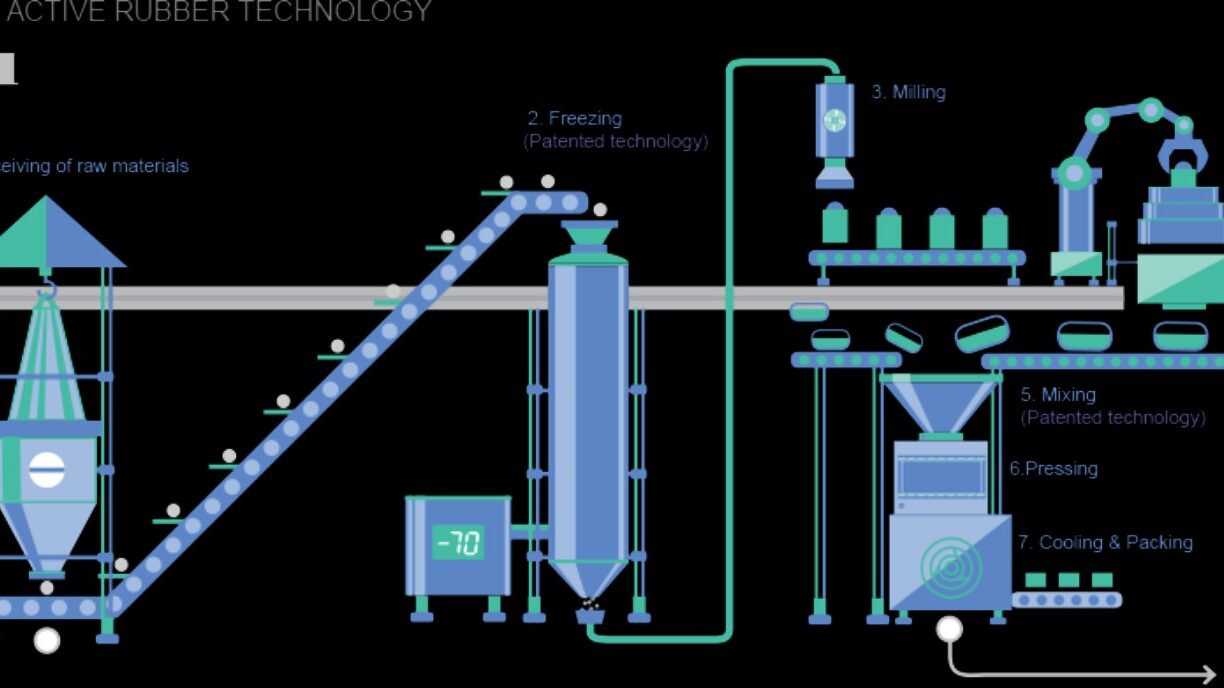 If you’ve ever seen a tire graveyard piled high with trashed rubber, you can easily understand that Israeli company EcoTech Recycling has a green gem of an idea.

“Rubber is a valuable commodity, and we are making it reusable,” said CEO and President Gideon Drori.

“AR is a substitute for synthetic rubber that can be used to make new tires, automotive parts or an inner wall and flooring insulation called ECOINSUL that we developed ourselves.”

ECOINSUL, Drori said, “is literally a new standard that outperforms the current standard tenfold. There’s almost no difference in price and it’s easy to handle and apply. It does very effective acoustic and thermal insulation. And it’s all made out of waste.”

With 21 worldwide patents issued, EcoTech finished testing and scaling in early 2020 and signed a strategic partnership with Austria-based Sibur International, one of the largest synthetic rubber manufacturers.

“Sibur has brought us a lucrative contract in the Austrian market and may set up its own factories using our technology,” said Drori, noting that Europe has over 4.5 million tons of tire waste annually.

“We are in discussions with a large chemical manufacturer in Italy and we’ve been asked to set up factories in the UAE. We’ve also been approached by Russia, China and Australia. And we hope to set up another facility in an OECD country.”

Headquartered in Petah Tikva, EcoTech is raising capital and converting its R&D site in Acre (Akko) into a factory to fill orders.

Tires roll into the circular economy

“With increased oil prices and toxic contamination, the rubber industry is critical when it comes to reducing environmental pollution,” he said.

“AR is produced without hazardous oils, chemicals or new resources. It’s such a clean process that for every ton of AR we produce we get six tons of carbon credit. The idea of the circular economy is completely coming to life and in a manner far better than putting waste rubber back on the market.”

It seems this technology arrived in the right place at the right time.

The European Union’s new microplastic directive bans rubber powder with additives as well as crumb rubber, a playground surfacing material made from shredded tires, because it has been found to contaminate soil and is a suspected carcinogen.

“This brings a problem of how to handle waste rubber from tires into a new sphere,” said Drori, because existing solutions such as devulcanization, combustion and burning tires for fuel are environmentally problematic.

“We are one of the only solutions out there that is completely viable and ready,” he said.

EcoTech won third prize in the innovation contest sponsored by BuiltUp Ventures and the Israeli Export Institute at the TLV ConTech & PropTech last November, and placed in the top five in a World Economic Forum sustainability competition.

The company’s technology is based on an idea of the father of its chairman and founder, mathematician Oleg Golobrodsky.

“Oleg was introduced to me in 2005. His dad had been the COO of a large ammunition factory in the Soviet Union. He died after getting sick in prison for the crime of being Jewish. But his legacy was a crazy idea of how to recycle tires,” Drori said.

“Oleg and I set up a company in Ukraine and in 2011 brought it to Israel and started to work on Oleg’s father’s idea — a thermodynamic technology that freezes rubber without a lot of electricity and no liquid nitrogen and turns it into micron-sized powder.”

Working with experts from the Technion-Israel institute of Technology, the EcoTech team led by chief engineer Oleg Zuikin developed a chemical process that reactivates the polymers in the micron powder, enabling them to connect to other polymers and form a new material.

“We can take any kind of used tires and turn it back into synthetic rubber. We are the only company in the world that has closed the loop on used tire recycling,” said Golobrodsky.