Disunity Day: Why Cameroon’s National Unity Day Is A Source Of Bitter Divisions Among Its People

Critics want the day that marks the country's reunification—May 20— scrapped since it marks a constitutional “coup” 49 years ago.
By Nalova Akua June 9, 2021
Facebook
Twitter
Linkedin
Email 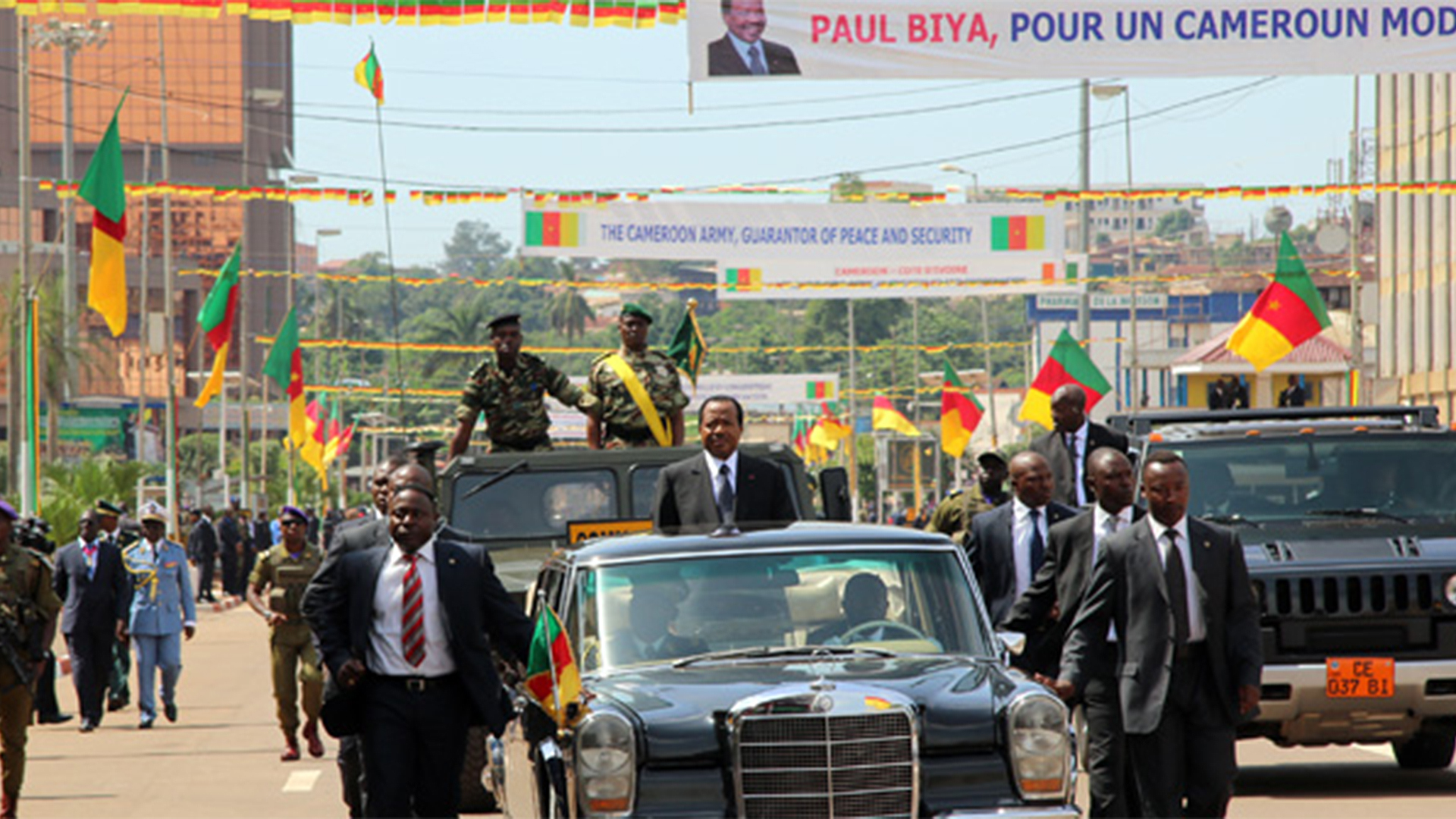 President Paul Biya during the country's National Day celebration. (Courtesy: Presidency of the Republic of Cameroon)

YAOUNDÉ, Cameroon — Nothing divides people in the Central African nation of Cameroon today as their history epitomized in the National Unity Day celebrated on May 20 since 1972.

Celebrations have not been held for the past two years due to Covid-19 restrictions.

Still, debates about when and why this day should be observed in the first place have gathered momentum, fueled by the raging conflict between the Cameroon military and Anglophone armed separatists.

“Before the last five years, many Cameroonians didn’t even know what transpired on May 20, 1972, but events since 2016 have educated many on Cameroon’s political history,” Emile Sunjo, Senior Lecturer of International Relations and Conflict Resolution in Cameroon’s University of Buea, told Zenger News. 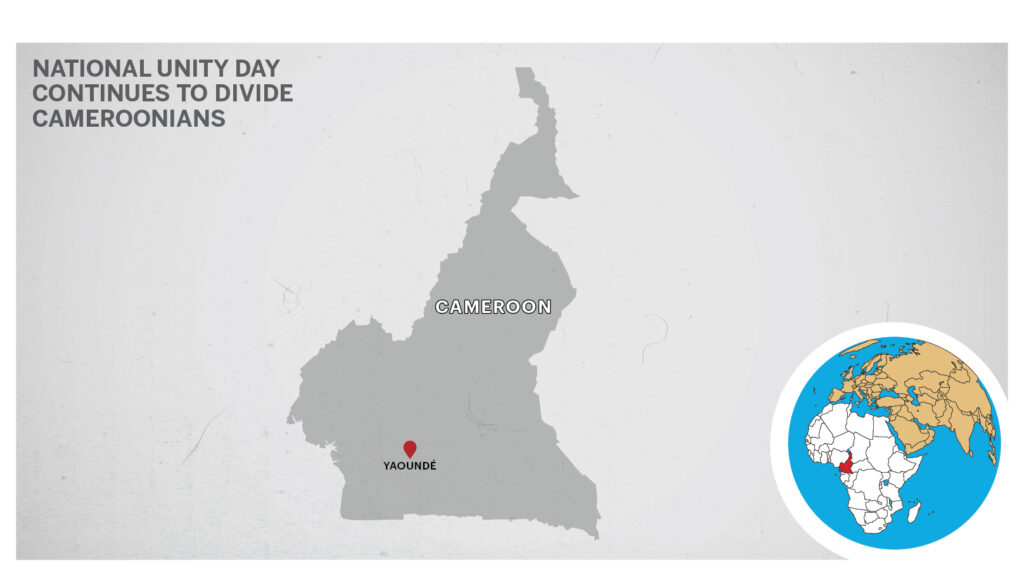 The question posed to the electorate read:

“Do you approve, with a view to consolidating national unity and accelerating the economic, social and cultural development of the Nation, the draft Constitution submitted to the people of Cameroon by the President of the Federal Republic of Cameroon and instituting a Republic, one and indivisible to be styled the United Republic of Cameroon?”

Over the years, critics have condemned how the government conducted the referendum.

For one, they insist the question posed to the Cameroon electorate was one-sided because it only proposed the merits of a unitary system.

Secondly, there are claims that Cameroonians, on getting to the polling booths on May 20, 1972, discovered that only two types of ballot papers were available—one bearing the word “YES” for the English-speaking voters and another bearing “OUI”(French for YES), for the French-speaking voters. No ballots were bearing “NO”.

Cameroon was first colonized by Germany (1884-1916) and later split between France and Britain.

French Cameroon gained independence on January 1, 1960, while the British Southern Cameroons achieved independence by reunifying with the Republic of Cameroon on October 1, 1961, after a referendum organized by the United Nations.

The results of the 1972 referendum meant Anglophone and Francophone regions became one country rather than being governed separately.

This made Anglophone Cameroonians lose institutional autonomy, which came with the federal system, such as multipartyism, the maintenance of educational and judicial systems established under British rule.

“This was what characterized political evolution in African countries: to consolidate power at the center,” said Willibroad Dze-Ngwa, a lecturer of International Studies in Cameroon’s University of Yaoundé I.

“Competitive politics was not the thing for Africa. But coincidentally, in Cameroon, we had competitive politics, especially with the people of Southern Cameroons. People were hoodwinked into voting for a referendum announced in less than two weeks before the voting took place, which meant that it was already well-prepared in advance. So, the federal status quo was dissolved. It was an abuse of the constitution of Cameroon. An abuse of Articles 1, 9, 18, and Article 47 of the Federal Constitution.”

Article 47 of the 1961 Federal Constitution stated: “Any proposal for the revision of the present constitution, which impairs the unity and integrity of the Federation shall be inadmissible.”

But Elvis Ngolle Ngolle, a political scientist and a member of the Central Committee of the ruling Cameroon People’s Democratic Movement party, disagrees and says the referendum was legitimate.

“Article 47 of the 1961 constitution stated that the form of the State should not be tampered with, but then the other paragraphs of that article say in changing it, it requires consultations with all the actors concerned,” he told Zenger News.

“Consultations can be formal or informal. Campaigns are consultations. The 1972 referendum had legitimacy because the people voted; it had legality because the laws permitted it. It had constitutionality because it didn’t contravene any article of the 1961 constitution. Those who make the case that the ballot showed only “YES” forget people had the freedom not to vote. Some people didn’t like it. But the fact that you don’t like something does not make it illegal.”

The referendum advocates—mainly French-speaking Cameroonians—say the maintenance of the unitary state is non-negotiable.

To critics—mostly Anglophones—the referendum was a constitutional coup. Negotiation, on the other hand, they insist, is also out of the question because it would make the referendum look legitimate.

“What matters is not whether the ballots carried “YES”; the fact is that everybody was compelled to vote,” Dze-Ngwa told Zenger News.

“The question was posed in such a way that nobody could vote against “YES”—not even the greatest enemy of the state. There was a keen desire to concentrate power in the hands of the central government.”

An estimated 4 million to 5 million Anglophone Cameroonians—approximately one-fifth of the population—live in the country’s South West and North West regions, formerly under British colonial rule. The majority of the population lives in Francophone regions.

Since 2015, several lawyers’ associations have denounced the lack of translation of significant laws and the increased appointment of Francophone magistrates in the Anglophone regions who were untrained in common law and English.

Similarly, teachers have expressed long-standing grievances against Francophone teachers in primary and secondary schools in Anglophone regions and Anglophone universities.

Consequently, Cameroon has been rocked by a four-year conflict that has become known as the “Anglophone Crisis.”

The immediate incidents that sparked the prevailing row occurred in October 2016 when large numbers of Anglophone lawyers and teachers went on strike to protest what they saw as government-backed attempts to marginalize traditional English practices within Anglophone courts and schools.

The violent government crackdown, alongside the arrest and imprisonment of prominent Anglophone activists, led to a breakdown in negotiations in 2017 to end the conflict.

By October 2017, several secessionist groups formally declared the Anglophone regions independent of Cameroon, renaming the region Ambazonia. Since then, secessionists and government forces have violently clashed across the Anglophone territories.

“The root causes of the current conflict are traceable to the insensitive decisions and policies of colonial powers that did not consider the aspirations and needs of the local populations,” Sunjo told Zenger News.

The most intriguing thing that has pushed the country into the current crisis is changing the name from the United Republic to the Republic of Cameroon, Dze-Ngwa told Zenger News.

“This change meant that two things must have happened; either the British Southern Cameroons should have been assimilated or French Cameroon which achieved independence in 1960 would have assimilated.”

“National unity is first a state of mind. It is the manifestation of our collective will to live together,” he said.

Another issue that has sharply divided members of the Cameroonian public is why the country’s national unity day should be May 20—the day the federal structure was dissolved, instead of October 1 — the day it was instituted.

Sunjo suggested a different day to be set.

“Both May 20 and October 1 are laden with controversy to be appropriate national days. May 20 has come under significant scrutiny, and adopting October 1 would also be interpreted in some quarters as celebrating only the “independence” of the former British Southern Cameroons. A more appropriate day would have been the one on which a union treaty was signed.”