The French president was meeting voters in the Drome region when a man shouting a royalist battlecry attacked him.
By Stella Grace Lorence June 8, 2021
Facebook
Twitter
Linkedin
Email 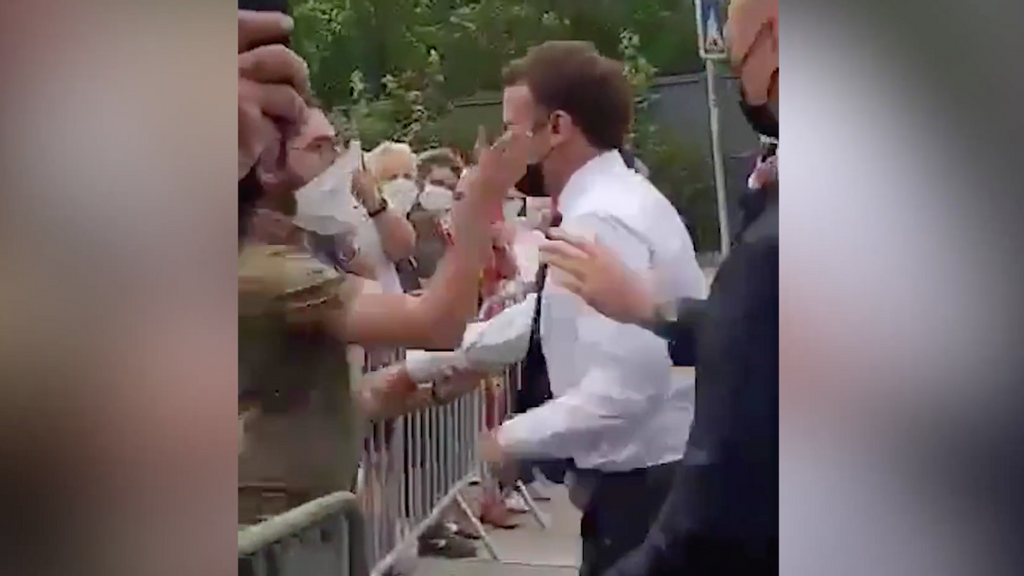 French President Emmanuel Macron, center, in white, was slapped Tuesday while on an official visit to a small town in southern France. The main suspect, left, in green, is in custody on charges of willful violence against a person holding public authority, according to French broadcaster BFM TV. Screenshot via Yahoo News.

French President Emmanuel Macron was slapped in the face Tuesday while campaigning in southern France, videos taken at the scene show.

He was on the trail in Tain-l’Hermitage, outside Valen, when he was attacked.

Approaching a crowd gathered behind metal barricades, Macron leaned in to greet a man, who shouted “Down with Macronism” (“A Bas La Macronie”) and slapped him across the face.

He shouted “Montjoie, Saint-Denis,” a French royalist battle-cry dating back to at least the Middle Ages, before being tackled by Macron’s security detail. Macron kept going down the line after the slap.

French television station BFM TV reported two people were arrested in connection to the incident, and authorities searched the main suspect’s home. He was charged with willful violence against a person holding public authority.

Macron was visiting the Drome region in southern France to meet with restaurateurs and farmers to celebrate the country’s reopening after easing restrictions from the third lockdown of the COVID-19 pandemic.

“Everything is fine,” Macron told French news outlet Le Dauphiné. “This incident must be put into perspective, which is, I think, an isolated incident. This should not obscure the rest of the important subjects which concern the lives of many.”

Macron is up for reelection in April next year, and aggregate polls show him behind Marine Le Pen of the National Rally party, the far-right party, by about two percent.

Le Pen denounced the attack, saying “while democratic debate can be bitter, it can never tolerate physical violence.”

“Democracy is debate, dialogue, the confrontation of ideas, but it will never be violence, verbal aggression and even less physical,” Castex said in a tweet.

The trip to the Drome region is part of a longer “tour de France” through the country set to end in mid-July, at the same time as the Tour de France cycle race finishes.

Macron was also egged as a presidential candidate in 2017 at an event in Montreuil, a Paris suburb, in the midst of protests over labor reforms.

He is hardly the only recent French head of state to weather physical attacks from the public.

In 2011, a man yanked then-president Nicolas Sarkozy during a handshake, nearly pulling him to the ground. Security officers tackled and arrested the man while Sarkozy, unharmed, returned to greeting onlookers.

Violent interactions with the public can be an occupational hazard for senior politicians.

In 2001, then-British deputy prime minister John Prescott was pelted with eggs while campaigning in north Wales, but fought back, landing a series of punches on the attacker.

How politicians react to sudden events in the glare of the cameras can shape public perceptions of them.

Gerald Ford’s image as president never fully recovered from a slip down the stairs from Air Force One in December 1975, leading to him being lampooned by Chevy Chase on the first season of Saturday Night Live.

In 2008, an Iraqi reporter hurled both his shoes at then-president George W. Bush, at a press conference in Baghdad.

Bush, however, brushed off having the shoes thrown at him, quipping to reporters as he kept going with his press conference: “All I can report is a size 10.”