The blaze was doused after over two weeks, but beaches near capital Colombo are swamped with plastic pellets.
By Saptak Datta June 8, 2021
Facebook
Twitter
Linkedin
Email 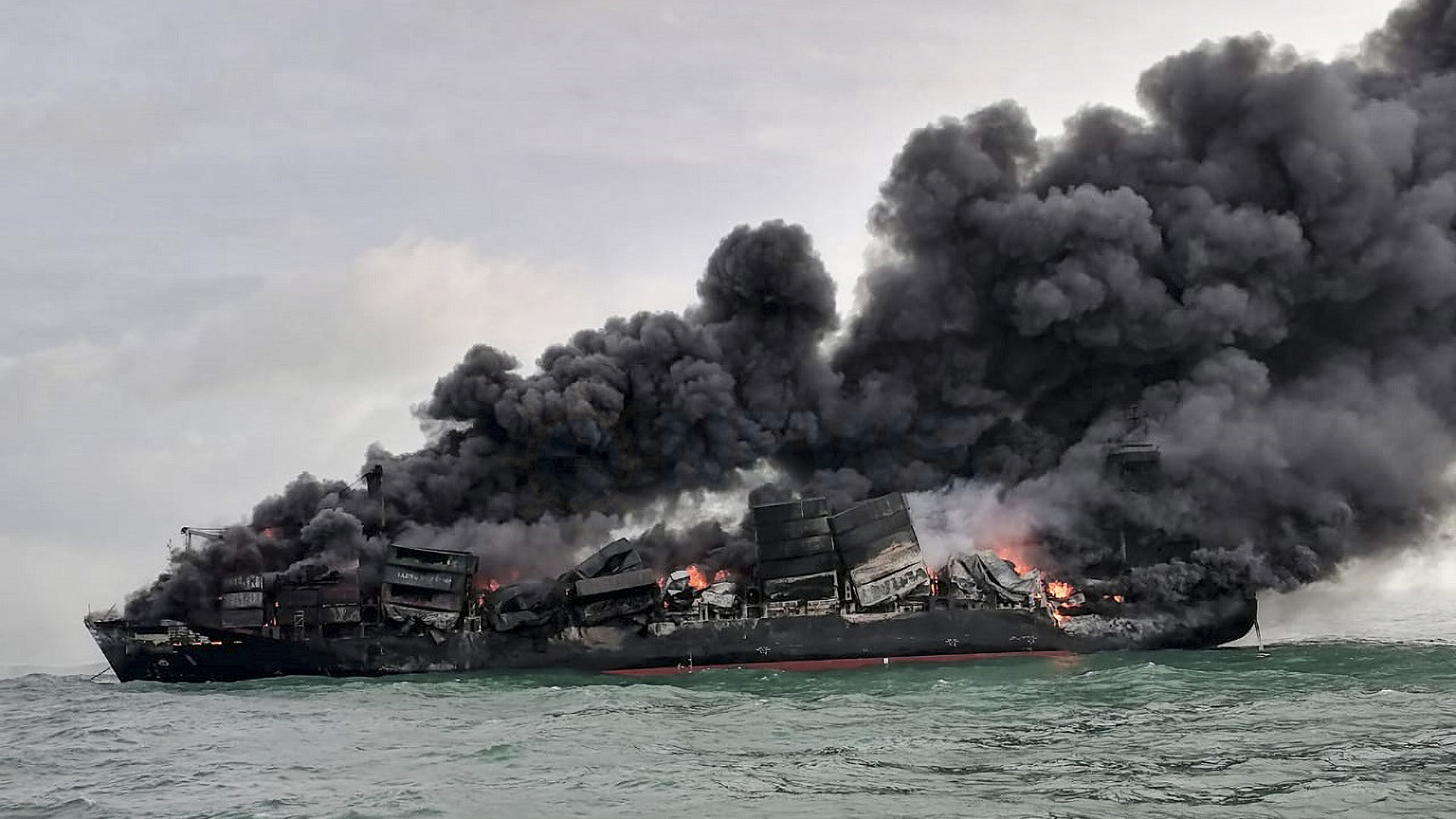 The ship, manufactured only this year and carrying more than 1,400 containers, burned for almost two weeks before finally being doused on June 1. (@slpauthority/Twitter)

KOLKATA, India — Dead turtles, birds, fishes, and a dolphin have washed up on the shores of Sri Lankan capital Colombo days after Singapore-registered MV X-Press Pearl laden with oil and caustic chemicals caught fire and sank.

The ship started from Qatar in the U.A.E. and was anchored off the port city of Negombo, about 11 miles northwest of Colombo, when flames broke out on May 21.

“It included nitric acid, methanol, sodium methoxide, cosmetics, methane, caustic soda, so on and so forth. It was carrying 350 metric tons [385 tons] of oil in its tanks.” 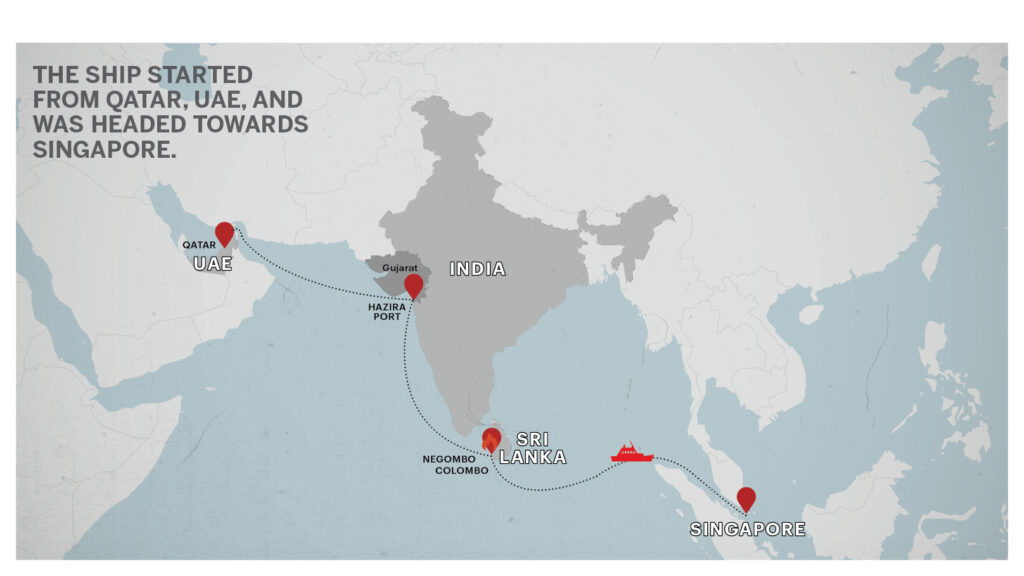 An explosion was reported on May 22, but the crew was still on board. The last of them evacuated following another explosion on May 25. Flaming containers filled with chemicals tumbled into the sea from the ship’s deck, spilling debris into the ocean and polluting the island nation’s beaches, as emergency crews fought to contain the blaze amid rough seas and monsoon winds. 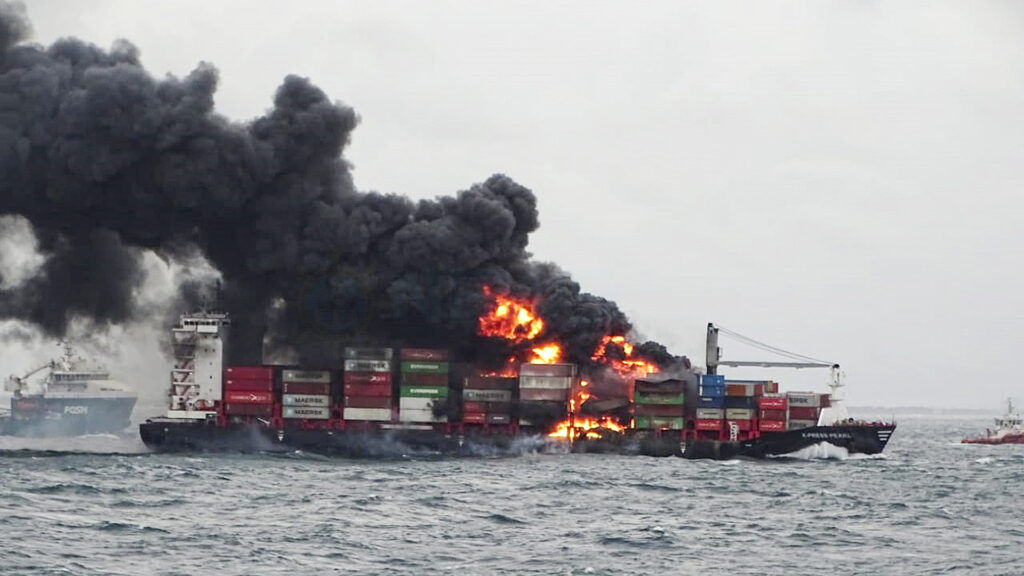 An explosion was reported on May 22, but the crew was still on board. (@IndiaCoastGuard/Twitter)

The ship, manufactured only this year and carrying more than 1,400 containers, burned for almost two weeks before finally being doused on June 1.

Silva said the cause of the fire is still undetermined .

The incident has led to tons of microplastic pellets spilling into the Indian Ocean and gradually swamping the coastline of Sri Lanka — creating one of the most significant marine environmental disasters in decades.

There are fears of the oil leaking anytime into the sea and hampering the nearby marine life.

“No oil spill has been observed so far, but mobilized necessary forces are ready to deal with an oil spill, given the uncertainty of the weather as the fuel is still trapped inside the tanks,” Silva said.

International marine and environmental experts claim the plastic pellets, known as nurdles, contain polyethylene, which is less dense than seawater and will float initially.

But, they warned that as time passes, exposure to the marine environment may alter their density enough for them to sink.

“This makes nurdles easy to skim off the surface and causes them to aggregate large, visible masses on beaches and elsewhere along the coast,” Asha de Vos, a Sri Lankan marine biologist, told Zenger News.

“Plastics of the size of nurdles, if consumed by fish, are likely to pass completely through the intestine and be excreted. However, that means any fish or shellfish eaten whole (including their digestive tract) could have nurdles in them.”

Vos said the list of species known to ingest plastic pellets numbers hundreds, although animal effects are difficult to quantify.

“As yet, there is no direct link between nurdles and impact on animals, or nurdles passing through the food chain. Though microplastics are present in many species, their impacts are complex, with poorly understood full ecological impacts,” Vos said.

She believes it is difficult to say whether nurdles will impact the coast or the ocean as each type of habitat will react differently to the presence of plastics.

“However, more sensitive parts of the coastline, such as mangroves or coral reefs, will require careful consideration and planning so that clean-up efforts do not cause more damage than the plastic itself.”

Last week, Sri Lanka’s fisheries ministry said emergency measures were put in place to safeguard the Negombo Lagoon and surrounding areas. They had suspended all fishing over an 80 kilometer (50 miles) stretch near Colombo.

Environmentalists at the Centre for Environment Justice took the Sri Lankan government and operators of the container ship to Supreme Court on June 4, alleging the local authorities should have prevented what they termed the “worst marine disaster” in Sri Lanka’s history.

According to the petitioners, the crew was aware of the leak nine days before the blaze failed to inform the Sri Lankan authorities.

Sri Lanka, by permitting the ship to enter its waters, has been hit by widespread criticism.

“Through this port, we get all the oil that Sri Lanka needs, the gas, chemicals, rubber, and other materials relating to other industries,” Prasantha Jayamanna, vice-chairman of the Sri Lanka Ports Authority, said.

“Similarly, because we are a major transshipment hub, various chemicals going to many other countries in Asia pass through us. This is the reality. We have to accept that. We cannot ask shippers not to bring such cargo here. Any port that stays in this industry has to handle such containers.”

On June 2, salvage experts tried to take the ship into the deep ocean by towing to minimize the pollution risk near the coastline. But the rear section of the cargo collided with the seabed, and the operation was abandoned.

“The ship’s stern was going underwater since the fire was doused,” Silva told Zenger News. “The vessel was on tow by Posh Teal, a tug hired by salvors. Gradually, the ship’s keel rested on the seabed and stuck there preventing further tow.”

Marine experts, with the assistance of the Sri Lanka Navy, recovered the voyage data recorder, commonly known as ‘ship’s black box’ on June 6.

Operators of the cargo, X-Press Feeders, confirmed the situation on the scene was the same with no signs of debris and no reports of fuel oil pollution.

“The ship’s aft portion is sitting on the seabed at a depth of about 21 meters (69 feet), and the forward section continues to settle down slowly,” the operators said.

“Salvors remain on scene to deal with any possible debris supported by the Sri Lankan Navy and the Indian Coast Guard, who have oil spill response capabilities on standby.”

“Applications had been made to both ports [Hazira Port in India and Hamad Port in Qatar] to offload a container that was leaking nitric acid, but the advice given was there were no specialist facilities or expertise immediately available to deal with the leaking acid,” the operator said.

Officials have lodged a complaint against the ship’s captain as well as the engineer.

Both were interrogated for more than 14 hours, and the court issued an order to prevent them from leaving the country. “Investigation is underway and being conducted by the Crime Investigation Department of Sri Lanka,” said Silva.

X-Press Feeders’ chief executive Shmuel Yoskovitz has apologized to the Sri Lankan people for the harm the incident has caused to their livelihood and the environment.

Sri Lanka’s Maritime Environmental Protection Authority has been cleaning the coast for the past many days. Cleanings are being conducted at 14 locations, and the Air Force, Navy, and the Army are supporting the drive.

Waste estimated to be between 800 and 900 tons has been collected in 43 containers of 20 feet size and will be disposed of safely.

“The success of clean-up operations will depend on how quickly the nurdles can be contained and collected,” Vos said.

“While removing every pellet from the environment is unrealistic, cleaning up this local, relatively contained spill will be much easier than trying to clean up plastics in the open ocean that are widely distributed.”

But environmentalists warn the plastic pellets in the sea could travel as far as India, Indonesia, and Somalia. And, seagrasses and nesting habitats will witness significant harm. Dead marine life has already started to show up in Sri Lanka.

Dead animals were found on beaches from Puttalam in the northwest to Mirissa in the south.

The country’s Department of Wildlife Conservation officials said that an investigation was underway to ascertain the cause of the deaths.

While losses to the fishermen community are unknown, the Centre for Environment Justice petitioners has sought compensation for the fishing and tourism industry.