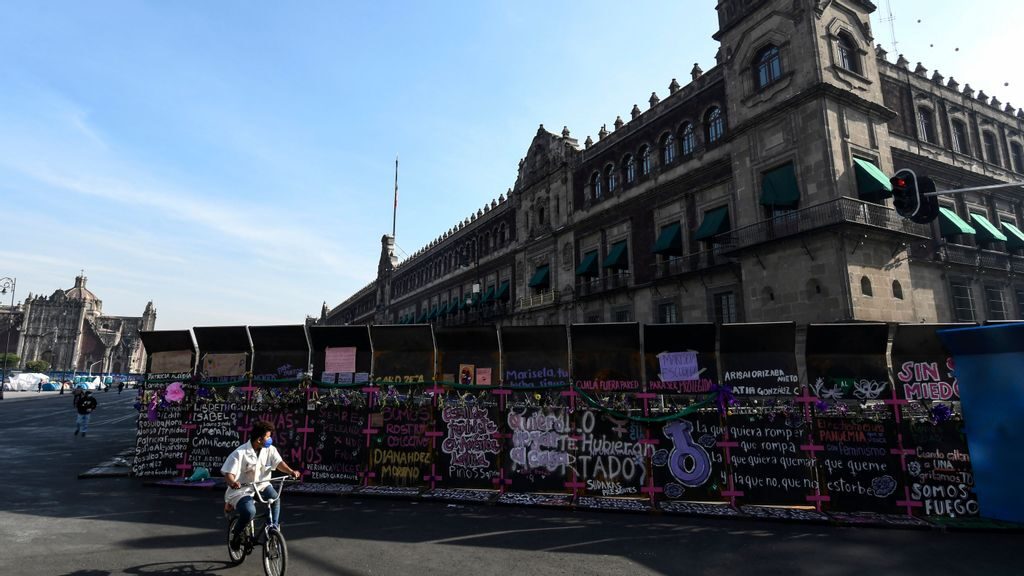 MEXICO CITY — Nadia Loera prevented Luis Puente, her then-husband and father of her son, from completing his run for Mayor of Ahome, a city in the Mexican state of Sinaloa. The wealthy businessman had already registered his candidacy for the National Regeneration Movement party (Movimiento de Regeneración Nacional, or Morena), but was forced to abandon the race after Loera spread the word of an earlier lawsuit for payment of alimony.

Six years after filing the suit, Loera is still waiting for justice. Twice courts have ordered the confiscation of Puente’s assets to pay the debt, but nothing has happened. According to Loera, Puente has bought the delay. “He has all the power to corrupt it: hiring lawyers and offering my own lawyers better fees [bribes],” she said.

The businessman has also been accused in court of domestic, psychological and financial abuse, as well as family abandonment. “The INE [National Electoral Institute] did allow him to register, but he could not keep the registration because a group of women supported me in denouncing him,” she said.

The election on June 6 was the largest in the country’s history, with 20,500 positions at the federal, municipal and state levels to be decided. And Luis Puente was not the only candidate under investigation for gender violence.

The June 6 election was the first in which candidates signed the 3-Out-Of-3 Declaration against violence. By signing it, the candidates declared under oath that they have neither been convicted nor punished for domestic violence, sexual crimes, or for not paying alimony. The National Electoral Institute required in October 2020 that all candidates for local or federal office sign the Declaration as a means to prevent political violence against women.

But there is still room to doubt that the candidates have a totally clean record on gender-based violence.

Group Observatoria Todas Mx, comprised of 154 civil society organizations, sifted through the candidates’ court records through May 31, finding 76 with a complaint or ongoing investigation. The party with the most candidates accused of gender violence was Morena, with 30; followed by the National Action Party (Partido Acción Nacional, PAN), with 11; and the Citizen Movement Party (Movimiento Ciudadano, MC), with seven.

Those men “not only should not be candidates, but they should also be investigated, taken to court and prosecuted if appropriate because violence against women is a crime,” said Yndira Sandoval, the group’s spokeswoman.

However, the National Electoral Institute has the power to cancel the candidate’s registration only if they were prosecuted, which leaves out dozens of candidates with a complaint or an ongoing investigation.

Félix Salgado Macedonio, Morena’s first candidate for governor of Guerrero, is one example. Two complaints of rape and three accusations of abuse and sexual harassment against him were not enough for the National Electoral Institute to reject his candidacy because he was not prosecuted. But he was kicked out of the race due to irregularities in his pre-campaign.

“If they have not yet been heard in court, the alleged offenders continue to have the presumption of innocence,” said electoral legal consultant Alfonso Cruz.

But Mexico’s unreliable justice system often leaves crimes uninvestigated and untried. According to the non-partisan watchdog organization Impunidad Cero, 51.4 percent of femicides went unpunished in 2019. In Mexico, 11 women are murdered daily because of their gender.

“We are subjected to a weak and porous judiciary that hardly follows the procedures of justice,” said René Torres-Ruiz, a researcher at the Department of Social and Political Sciences at the Universidad Iberoamericana.

The candidate for mayor of Cuernavaca, Morelos, Sergio Estrada Cajigal, of the Fuerza por México party, faces a complaint of physical violence. Cristóbal Arias, who ran for governor of Michoacán for the same party, has at least three ongoing investigations for domestic violence, according to the Observatoria Todas Mx. Both candidates remained in the race through the election. However, preliminary results do not favor them.

The electoral institute of Chiapas, one of the few states that reviewed its candidates’ 3-Out-Of-3 Declarations, found that 26 had ongoing investigations in family and criminal courts. But none of the trials had concluded; so the institute decided that the candidates could continue in the race.

There was no institutional effort to review the 3-Out-Of-3 Declarations for every one of the 20,500 candidates running, except in cases such as Chiapas, Sandoval said.

Chiapas’s Judiciary provided electoral authorities with the information needed to review the 3-Out-Of-3 Declarations of all 12,000 candidates running for local councils or seats in the local Congress.

For ethical reasons, the parties should not have nominated people with poor public reputation or facing any complaints, said Sandoval. “We recognize the parties as the main accomplices. Despite their background, they decided to have them run and developed campaigns paid for with our taxes.”

Social organizations found several cases in which candidates were accused of offenses related to gender violence, and the media pointed out more. “There would be cases of candidates who falsified their 3-Out-Of-3 Declarations in order to run,” said Alfonso Cruz, an electoral legal consultant.

The National Electoral Institute, the highest federal electoral authority, reviewed only a sampling of those running for 500 federal congressional seats. “Out of 3,000 applicants, they only reviewed 1,000, and cases such as that of Saúl Huerta, a pedophile candidate, were left out,” said Sandoval.

Huerta is a federal deputy [congressional representative] belonging to the Morena party, which also counts President Andrés Manuel López Obrador among its members. Huerta was up for re-election but submitted his resignation after being accused of sexually abusing a minor.

“The electoral authority had to review the 3-Out-Of-3 Declarations. But it could request the help of other agencies to make sure that the candidates have not falsified them,” said Cruz. Only three candidates from the National Electoral Institute’s sample were excluded from the electoral process.

Besides the candidates identified by the Observatoria Todas Mx, the National Electoral Institute and Chiapas’s local institute, 105 face complaints before judicial authorities or have open investigations.

Even after the elections, those facing accusations could still be denounced, according to Cruz. “The contenders who did not finish first could argue that the winning candidate has one of these issues.” But as of this writing, no one has contested the election results on that basis.

The Observatory will press the Electoral Institute to expand the 3-Out-Of-3 Declarations to cover sentenced cases and those with an open investigation before a court. In addition, they also will fight for the Declaration to be required not only for elected office but also for appointed officials.

Such lobbying efforts are not excessive for Mexico, whose latest election was the most violent in its history. As of June 1, 36 candidates were assassinated in the country, 21 of whom were women, including Alba Barragán, the candidate of the Social Movement party in Moroleón, Guanajuato.