Chilean researchers, in collaboration with the University of Queensland, are testing the antibodies despite the lack of funding. 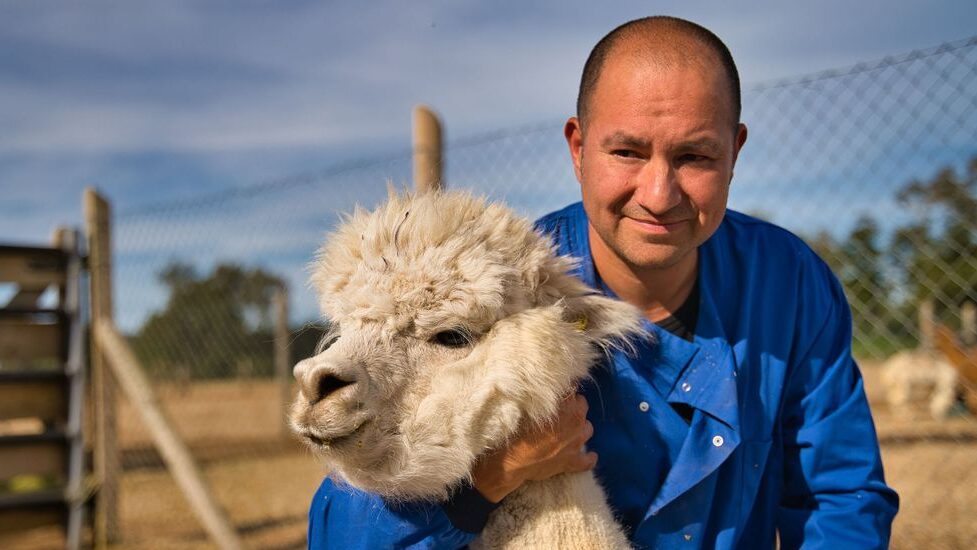 Alejando Rojas hugs an alpaca, his main incentive for working with these animals. (Courtesy Alejandro Rojas)

Researchers from the Austral University of Chile (Universidad Austral de Chile, UACh), in partnership with the University of Queensland in Australia, identified antibodies derived from alpacas (a South American animal of the camelid family) capable of neutralizing the SARS-CoV-2 variants. Among the potentially neutralized variants are the British (B.117) and the South African (B.1.351).

Scientists from both countries are pursuing the possibility of neutralizing the Brazilian P.1 variant. They consider this variant the most aggressive one due to the higher viral load in infected individuals, which risks the mutation and transmission of the virus.

“Since 2017, my team has created a platform for the production of antibodies against emerging viruses. These types of antibodies — known as nanobodies —, are exceptional, as they are produced from the immune system of alpacas,” said Alejandro Rojas, the research coordinator and Ph.D. in molecular biotechnology at the Austral University of Chile, in the city of Valdivia.

“After the alpaca has generated the antibodies, we extract its genetic information, which we inject into bacteria and human cells which are capable of producing the antibodies in an unlimited amount. Therefore, our immediate goal is to develop and implement immunotherapy against SARS-CoV-2.”

Teresa Pinto, a doctor of veterinary medicine and Rojas’s team member, says that alpacas are fundamental in these types of research, producing different kinds of antibodies.

“To generate the antibodies we need, each animal must be perfectly healthy. To manage this, we have veterinarians who take care of them and make sure their vitals are always optimal. We trim the alpacas’ nails once a month, watch their weight so that they do not become under or overweight, check for parasites, and feed them with vitamin and mineral supplements,” she said.

According to research from the Austral University of Chile, the W25 antibody from the alpaca ‘Buddha’ is one of the best COVID-19 neutralizers that exist. It can continue working even in extreme temperatures, which makes it an excellent therapy option.

The development of antibodies is still in the preclinical stage due to a lack of funding. Rojas estimates an investment of $3.5 million is needed to advance the research to clinical trials.

The scientists hope to finalize the efficacy and toxicity tests to present the information to the Chilean Public Health Institute (Instituto de Salud Pública de Chile, ISP). These tests are necessary to implement a Phase 1 clinical trial, which will test the safety of antivirals in patients. Once that test is over, the study will move to the Phase 2 clinical trial, testing the antivirals in SARS-CoV-2 infected patients.

“Unfortunately, the Government of Chile has been quite negligent in visualizing our research potential. To date, it is impossible for viral antibody development in Chile cannot be financed,” said Pinto.

The Chilean researchers’ funding comes from the South Korea Ministry of Science and Technology, but it only finances human resources, technical training, and infrastructure.

Scientists at the University of Queensland are preparing to test the antibodies extracted from the alpacas on laboratory mice. The tests will be conducted in the United States. The project leader is immunobiologist and researcher Alberto Amarilla Ortiz, 41, originally from Paraguay, who works at the Australian university’s Biosafety Level 3 laboratory.

“Dr. Alejandro [Rojas] has the support of a group of North American scientists who will carry out tests in mice to verify the efficacy of our nanobody. We consider it challenging, as the scientists will treat mice that have already been infected with the COVID-19 virus. Only then will we know if the antibodies really can neutralize the virus and, consequently, reduce the lung’s viral load, lessen the disease symptoms, and prevent the death of the animals. If the antibody works, we will continue to in vitro tests. I am extremely confident that it will work in the lab mice,” said Amarilla Ortiz.