VIDEO: Would Cue Believe It? TikTok Star Cuts A Cucumber In Half With A Playing Card 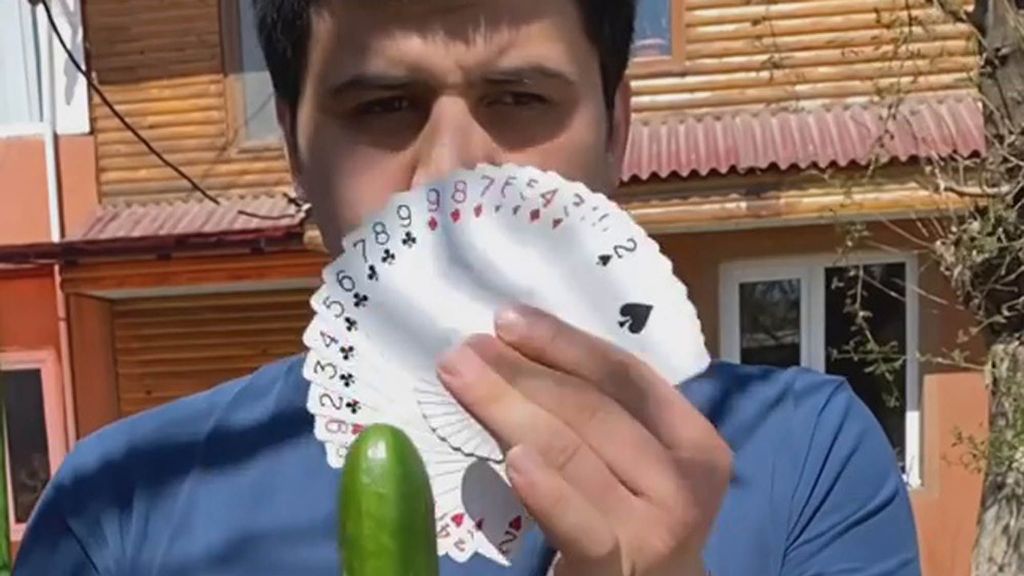 A pharmacist from a small Central Asian country has become a social-media star by performing stunts, such as splitting a cucumber and a falling frankfurter with playing cards and piercing two swinging bottles with a single arrow.

Nuriddin Karimov, of Tajikistan, shares videos of his trick shots on TikTok and Instagram under the name Cardist World.

In the first video, Karimov shows a pack of ordinary playing cards to the camera in front of an upright cucumber.

He then tosses one card at the cucumber, splits it in half, and takes a chunk to eat.

In the second clip, he takes aim at two swinging plastic bottles with a bow and pierces them with a single arrow.

The third video shows him slicing a falling hot dog with a playing card.

“In my spare time, all I do is my hobby,” said Karimov, a pharmacist. “I really love it. Every day I think about new ideas.”

He sometimes preps several weeks before a video is filmed. But he often gets the trick right the first time.

Karimnov uses ordinary Bicycle brand playing cards and was inspired to try out tricks by his brother, Riki.

“The main thing is confidence, a little power, accuracy and a lot of practicing,” said the influencer, who is married with one daughter.

Some netizens have accused him of using video effects in his clips. He chooses not to respond to such attacks.

“I am just glad I love this hobby and make videos for myself. It is best not to communicate with trolls. It is not useful and a waste of time.”

«Previous Post
VIDEO: Pew! That Was Close: Skunk With Head In A McDonald’s Cup Saved By Cop »Next Post
Many In India Angry With Government For Constructing New Power Corridors