VIDEO: Puppy Love: Grieving Dog Stands Guard Over Her Friend’s Body In The Middle Of A Highway

She refused to leave her dead pal as cars sped past them.
By William McGee June 7, 2021
Facebook
Twitter
Linkedin
Email 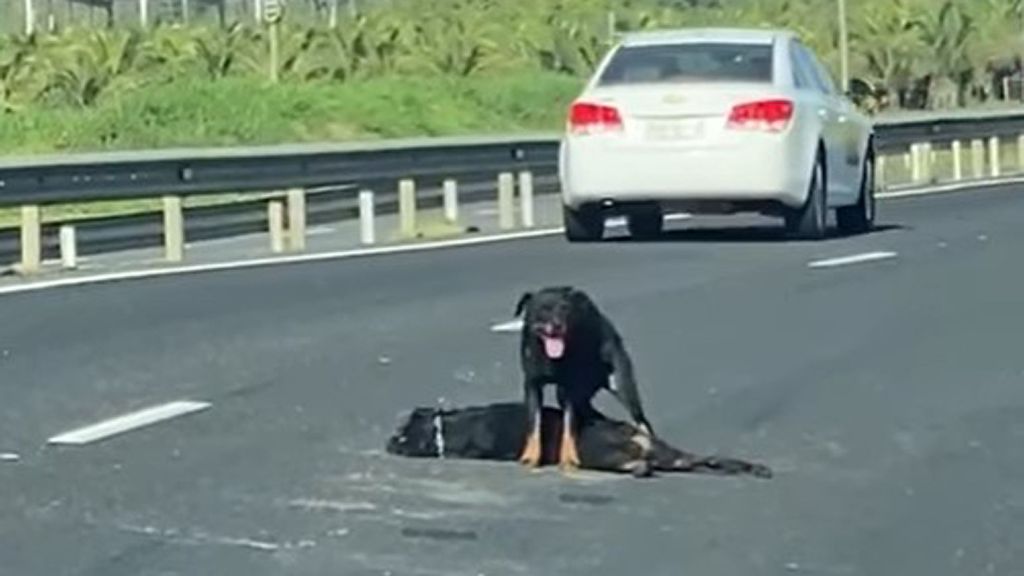 A dog protects the body of another dog that was run over by a car on a highway in Guarapari, Brazil, on June 4. (Policia Rodoviaria Federal/Zenger News)

A dog was filmed standing over the dead body of another in the middle of a busy highway in Guarapari, Brazil, on June 4.

The female dog seems determined to protect the deceased dog, despite being in the middle of a busy lane amid oncoming vehicles.

Passing motorists are seen slowing down as they passed the dog and the lifeless body of another dog.

The video was filmed by traffic police while a team from EcoRodovias, the company that manages the freeway, removed the two dogs from the road.

Details of the accident that killed the large, black dog are unknown. The pair appears to be the same breed.

The female dog was released on a ranch in nearby Serra.

«Previous Post
VIDEO: Frog Tries To Hop It After Being Swallowed Whole By Snake »Next Post
VIDEO: Pew! That Was Close: Skunk With Head In A McDonald’s Cup Saved By Cop