The 2,700-year-old stone tablet is covered in hieroglyphs and marked with a royal symbol.
By Basant Essam June 7, 2021
Facebook
Twitter
Linkedin
Email 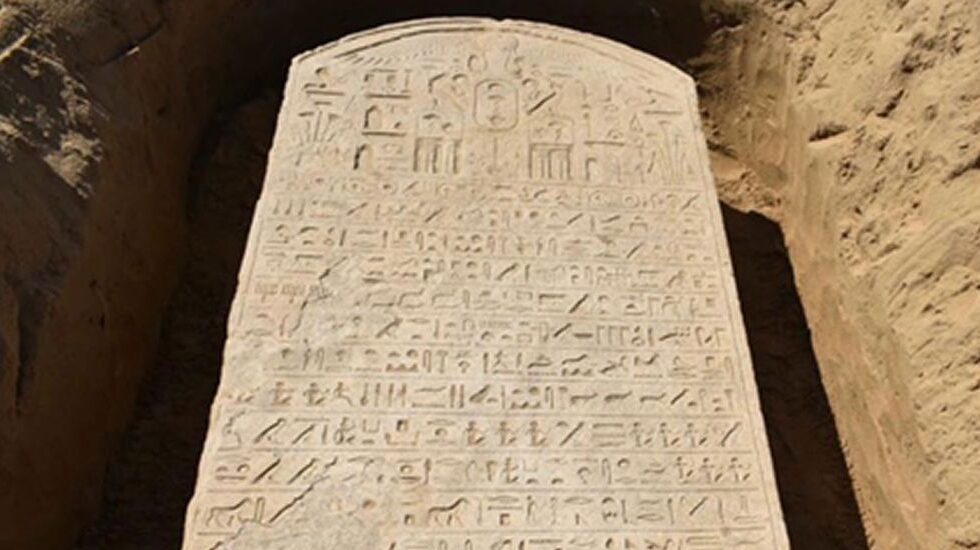 The Ismailia Museum in Egypt received a sandstone stela dating back to the 26th dynasty of Egypt that was discovered on a farm in Ismailia governorate, Egypt. (Egyptian Ministry of Tourism and Antiquities/Zenger News)

This ancient sandstone monument dating back to around 600 B.C. was discovered by an Egyptian farmer while he was clearing land to plant crops.

The Egyptian Ministry of Tourism and Antiquities said in a statement that the ancient sandstone stela from the 26th Dynasty of Egypt (664 B.C.–525 B.C.) had been found by a farmer in the Ismailia Governorate of Egypt on June 3.

‘Stela’ is a Latin word used for a stone slab typically shaped like a gravestone which on the surface has either text or ornamentation, and was created to pass on a message.

The farmer who found the ancient stela on his plot of land immediately notified the Tourism and Antiquities Police.

He added that the arch of the stela is marked with the winged sun symbol associated with divinity, royalty and power in Ancient Egypt and a cartouche of pharaoh Wahibre, also known by his Greek name Apries, who was the fifth king of the 26th dynasty. Also, 15 lines of hieroglyphs are seen engraved on the rock.

The 26th dynasty was the last dynasty to rule Egypt before the Persian conquest in 525 B.C. Apries ruled Ancient Egypt from 589 to 570 B.C. and led Egypt during a period that was fraught with internal problems.

Apries faced a mutiny from soldiers in the Kingdom of Judah, failed to protect Jerusalem from Babylonian forces and saw his army mauled by the Greeks during a war in Libya.

Waziry explained that the stela was probably erected by Apries during a military campaign in which he led his armies to the East.

The stela is currently being analyzed by experts at the Antiquities Museum.