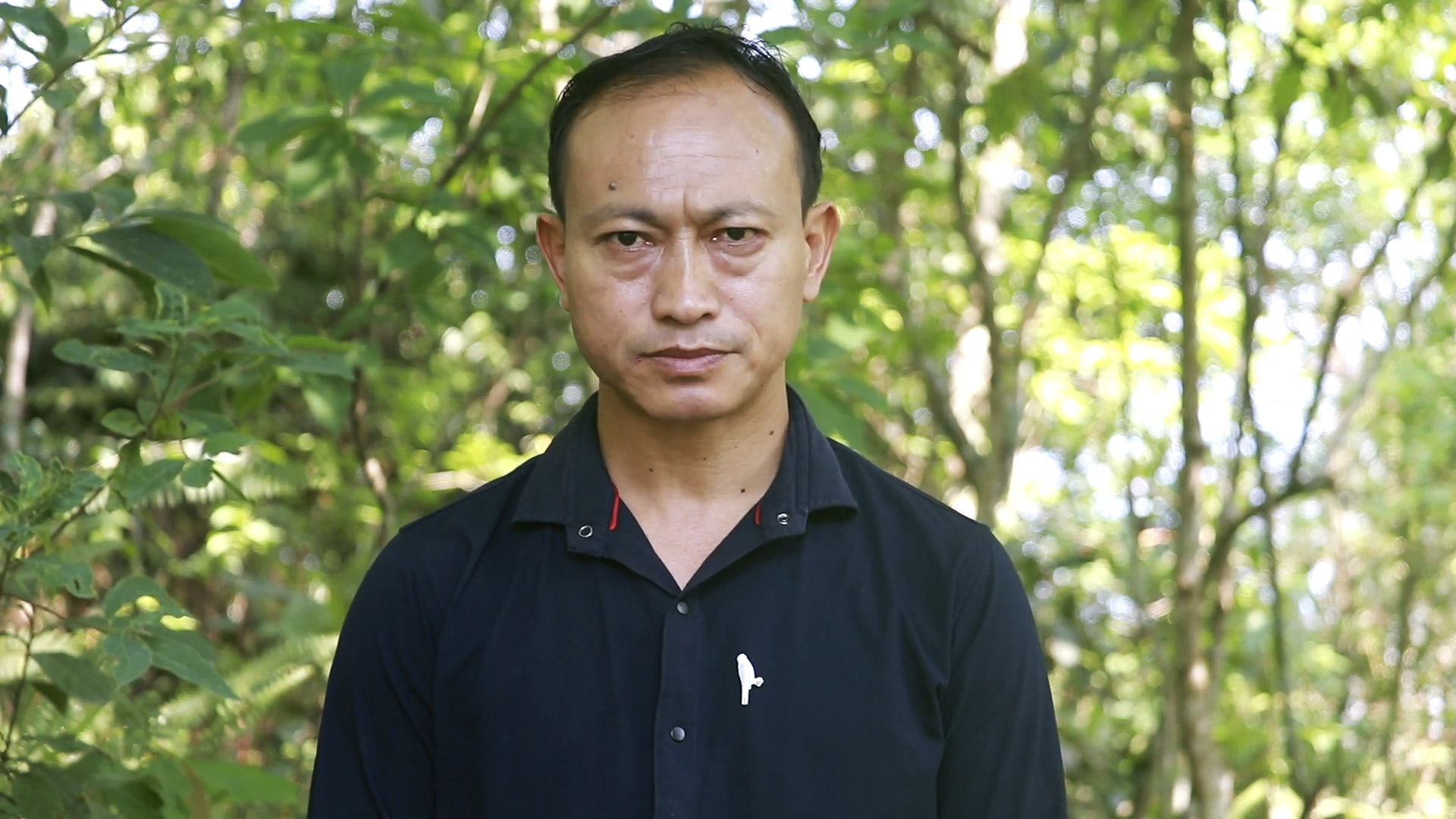 KOLKATA, India — Y. Nuklu Phom spent his entire childhood foraging into the tropical and pine forests in Nagaland, a mountainous state in northeastern India and a global biodiversity hotspot.

Such was his endearment towards the towering trees and gushing rivers that Phom has spent the last decade safeguarding them.

This year, Phom won the 2021 Whitley Award for his continuous efforts in ecological conservation.

“I was born in a small village in eastern Nagaland surrounded by forests and wildlife. Our people have always coexisted with nature and depended on the forests for their survival,” Phom said while receiving his award.

“My grandfather told me as a child that the forests were mourning as humans were outing so much pressure on it. If this continues, my generation will find it hard to survive. He [the grandfather] was right.” 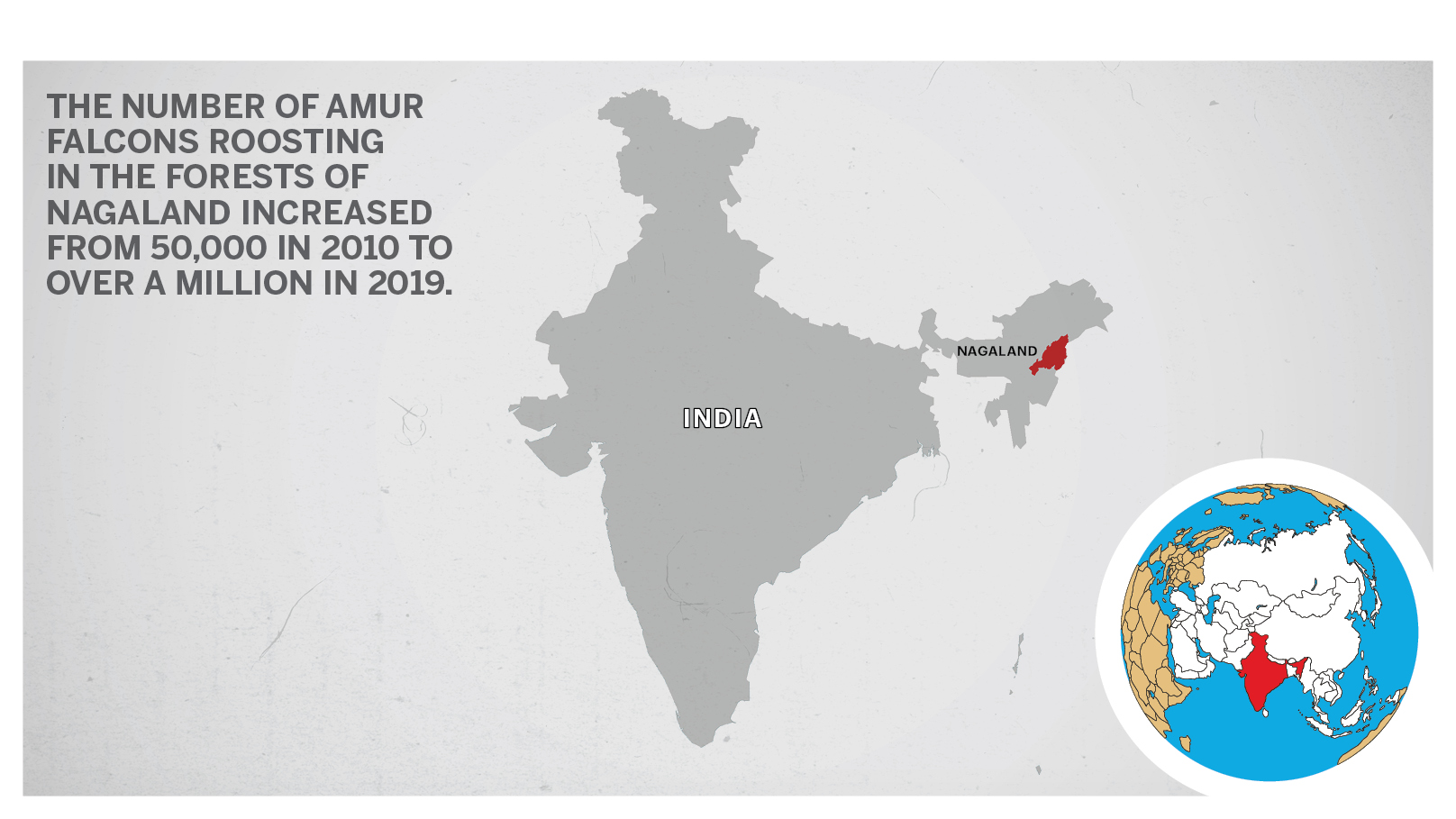 “As a church worker, 15 years ago, having witnessed the loss of biodiversity in our forest, I resolved to start a small community conservation project in my village of Yaongyimchen, and it has been a great success,” he said.

The award — won by six others from South Africa, Argentina, Brazil, and Kenya — commemorates conservationists and grassroots leaders in countries rich in natural resources but lacking in financial resources for conservation.

UK-based Whitley Fund for Nature, the charity behind the award, offers recognition, training, and grants to proven grassroots conservation leaders across the Global South.

“Nuklu Phom is the winner of the Whitley Award donated by the MAVA Foundation for establishing a biodiversity peace corridor in Nagaland,” read the statement by Whitley Fund for Nature.

“With his Whitley Award, Nuklu and his team will create a network of community-owned forests to fortify the rich biodiversity and culture of Nagaland.”

Phom’s project chose Amur Falcon — a migratory bird flocking in huge numbers to Nagaland — as the indicator species to measure their success.

“This species protects humanity by taking away the insects, which otherwise would destroy the vegetation,” Phom said.

Under Phom’s initiative, the village set aside 10 square kilometers of forest land for conservation. Environmentally-friendly farming replaced hunting and logging to create a sustainable income while allowing forests to regenerate.

Owing to Phom’s endeavors, the number of Amur Falcons roosting in the forests of Nagaland increased from 50,000 in 2010 to over a million in 2019.

“I came up with this solution (creating a network of community-owned forests) to work upon the conflict that was between environment and us, humans,” Phom told Zenger News.

The Amur Falcon, a small raptor in the falcon family, breeds in south-eastern Siberia and northern China. They migrate in large flocks across India and over the Arabian Sea towards Southern Africa in winters.

Nagaland is also considered as the ‘Falcon Capital of the World.’ Amur Falcons are protected under the Indian Wildlife Protection Act, 1972.

“Shri Nuklu Phom of India wins the 2021 #Whitleyaward for establishing a #biodiversity peace corridor in Nagaland. His continuous efforts have seen an increase in the roosting of #Amurfalcons from 50k to 1 million in 9 years,” tweeted India’s ministry of environment, forest, and climate change.

The reward, a sum of £40,000 ($56,447) along with the prize, is meant for creating a new network of community-owned forests to protect Amur Falcons and increase biodiversity in the mountainous state.

Phom feels the loss of biodiversity across the globe is so massive that the sound and sight of many species in the world remains inexperienced or unknown to the world.

Phom lives in Longleng — one of the eleven districts of Nagaland — with his wife Carolyn, an English teacher in a government school, and their three children.

Appreciation lauding Phom’s work was due in order.

“Congratulations to Mr. Nuklu Phom for winning the Whitley Awards 2021. Your hard work, commitment & tireless effort in establishing a biodiversity peace corridor is recognized & have brought laurels to all of us. I join your award-winning celebration and wish more success,” tweeted S Pangyu Phom, Nagaland’s minister for health & family welfare.

However, when Zenger News reached out to the forest department of Nagaland, they did not respond.

“We are delighted to see that Nuklu Phom from Nagaland has won the @WhitleyAwards 2021. We hope this will shine the spotlight on the biodiversity peace corridor he is working on to protect the environment in Nagaland. We wish him all the best!” tweeted the British Deputy High Commission in the eastern city of Kolkata.

“Congratulations to Nuklu Phom, the only person from India to win the prestigious #WhitleyAwards 2021 for his work; “Establishing a biodiversity peace corridor’. The award is one of the world’s leading prizes for grassroots conservation. My best wishes for all his future endeavors,” tweeted Rio.

Biodiversity corridors are areas of vegetation that allow animals to travel from one patch of native forest to another. A corridor provides shelter, food, and protection from predators by imitating the structure and diversity of native vegetation.

“India’s growing population of more than a billion puts tremendous pressure on its natural spaces,” states the report. “The growing need for land, infrastructure and energy requirements of such a large population has slowly pushed the natural spaces into silos of protected areas.”

The report also states that in a country like India, the most protected areas are connected by patches of forests, grasslands, or agricultural land. However, socio-economic pressures have led to fast-depleting corridor spaces, with the biggest concern for corridor management being the growing linear infrastructure network.

“The story of the Biodiversity Peace Corridor is an example of how communities, policymakers, and scientists can come together for a cause,” Yash Marwah, co-founder, Let India Breathe — an environmental communications collective — told Zenger News.

“It once again shows to the rest of India that northeastern states lead by example. It might sound like utopia, but I’m sure he [Phom] faced some resistance as well.”

Marwah believes there is no reason to walk away from any resistance and protests as it’s the cornerstone of democracy.

“I hope people visit Nagaland not only to enjoy its beauty but to learn this textbook democratic way of protecting our biodiversity too.”