Protesters Take Over Baseball Game Between Cuba And Venezuela

The pre-Olympic event took place in Florida, where thousands of each group live in exile. 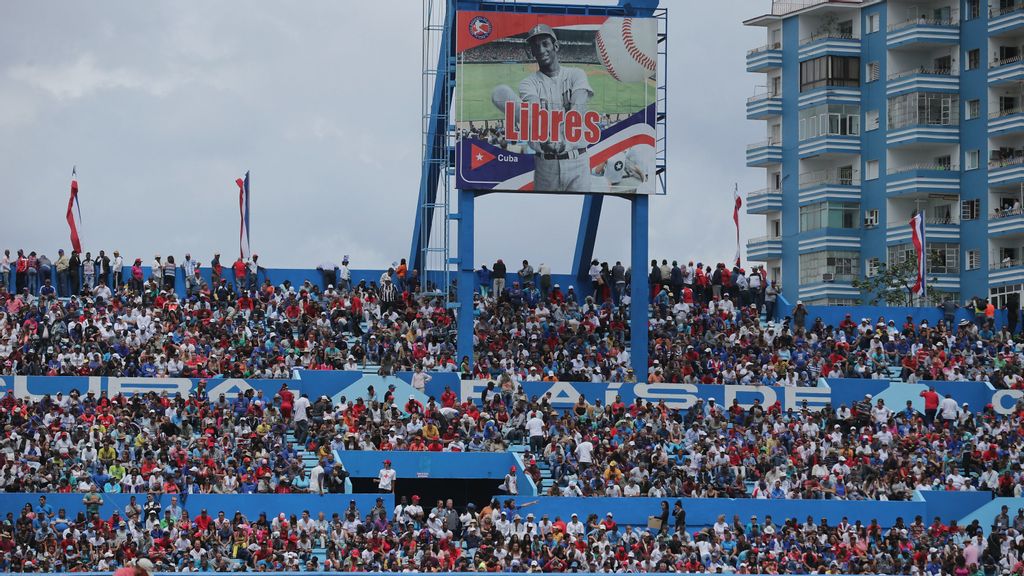 Baseball is often a place for Cubans to express political ideas. Then-U.S. President Barack H. Obama attended a match in Havana on March 22, 2016, along with Raúl Castro, then-President of Cuba, as a gesture of rapprochement. (Chip Somodevilla/Getty Images)

Despite being regional neighbors who share a national sport, Cuba and Venezuela do not often face each other on the baseball diamond, much less in the United States.

But the community of West Palm Beach, Florida, saw them square off during baseball pre-Olympic qualifiers for Tokyo 2021 on May 31. Cubans and Venezuelans expected the game to be broadcast in Havana and Caracas.

Dissidents saw the match as an opportunity to launch a political message.

After intense publicity by Cubans on the island and in exile, tickets for the match sold out quickly.

“I invite all Cubans in Florida and the United States who follow baseball to go and support the Cuban baseball team,” said Eliécer Ávila, a political leader living in Miami.

“I wish to summon all Venezuelans who want to show their discontent against the Maduro regime and the entire Cuban community … We need to fill that stadium with Cubans and Venezuelans against communism,” said Cuban influencer Alex Otaola.

In addition to Venezuela and Cuba, the Group B division of the qualifiers also includes Canada and Colombia. However, the game that generated the most interest pitted Cubans against Venezuelans.

Florida is home to 1.5 million Cubans. The Sunshine State’s Venezuelan population has grown exponentially in recent years, mounting to more than 200,000.

While Venezuela regularly attends international competitions, such as the Caribbean Series or the World Baseball Classic, the same cannot be said for Cuba, which has been excluded from some of these events since the Cuban Revolution. The May 31 game was unprecedented.

“I asked the Cubans here [in the audience], and they said they hadn’t seen something like this [protest],” said Mari Montes, a Venezuelan sports journalist covering the games. “There were [protests] during the World Baseball Classic, where people chanted slogans. But today, the exiles were the organizers. All week, they have been calling for people to come and support the team, and the Cuban people with chants and signs,” she said.

“Someone wrote to me from Cuba that this message came from the Cuban youth in exile,” said journalist Norges Rodríguez, who reported the protest from the stadium. Rodríguez is the founder of the news website YucaByte and a leader in Cuban digital journalism.

In the 2006 World Classic game between Cuba and the Netherlands, held in Puerto Rico, a Cuban exile in the stands showed a sign that read: “Down with Fidel.” The move received reprimands from Cuba’s delegation.

In a similar incident, former Venezuelan President Hugo Chávez was the object of protests in Venezuela’s games, most prominently in 2009.

However, the May 31 protest is significant and differs from older protests.

Recently, engineer Miguel Díaz-Canel became Cuba’s president. He is the first head of state since 1959 who was not part of the Cuban Revolution. Fidel and Raúl Castro ruled with absolute control for six decades, and they elected Díaz-Canel to continue guiding the country’s politics.

Even so, Cuban society is experiencing its most vigorous protests in many years, spearheaded by the San Isidro Movement.

Recorded by established exiled artists, such as Yotuel Romero and Descemer Bueno, the song “Patria y Vida” (“Fatherland and Life”) has popularized the positions of the movement. It was played millions of times in a few days, despite limited internet access on the island.

Transforming this sporting event into a political act against the government was a meaningful accomplishment by the Cuban dissidents.

In Havana, the media has criticized party organizers for allowing it, condemning the tolerant attitude of the police towards protesters. However, Miguel Salazar, a sports management specialist, understands that such things are allowed as a way of supporting the athletes.

“The organizers have adopted a more collaborative and understanding attitude toward the athletes, recognizing them as human beings and role models for many people … Trying to hide the message or limit their freedom of expression can be counterproductive,” said Salazar, adding that event organizers should designate some spaces as purely for sports and other spaces for interaction.

The TV channels that broadcast the game cut the signal when a protester entered the field carrying a sign.

Members of the Cuban delegation, such as athlete César Prieto and psychologist Jorge Sile Figueroa, took advantage of the competition in Florida to flee Cuba and defect to (request political asylum in) the United States.

Historically, international sporting events have provided a podium for athletes to speak out against injustices. From Jesse Owens at the 1936 Berlin Olympics to Colin Kaepernick in the NFL, the world has recognized the relevance of athletes as agents of change in society.

“Sport as a platform to raise one’s voice and demonstrate politically goes hand in hand with sports coverage in the media. With radio, television and the press, the sporting event is magnified. It ceases to be a contest between two teams and becomes a competition between nations and / or continents,” Salazar said.

“The popularity that sports had attained by the end of the 1980s, which went hand in hand with the professionalization of [athletes in] many of the world competitions, positioned sporting events as attractive vehicles to make a political or social stand,” he said.

The May 31 case is different. Athletes living in countries controlled by the state fear raising their voices — so the audience spoke for them.