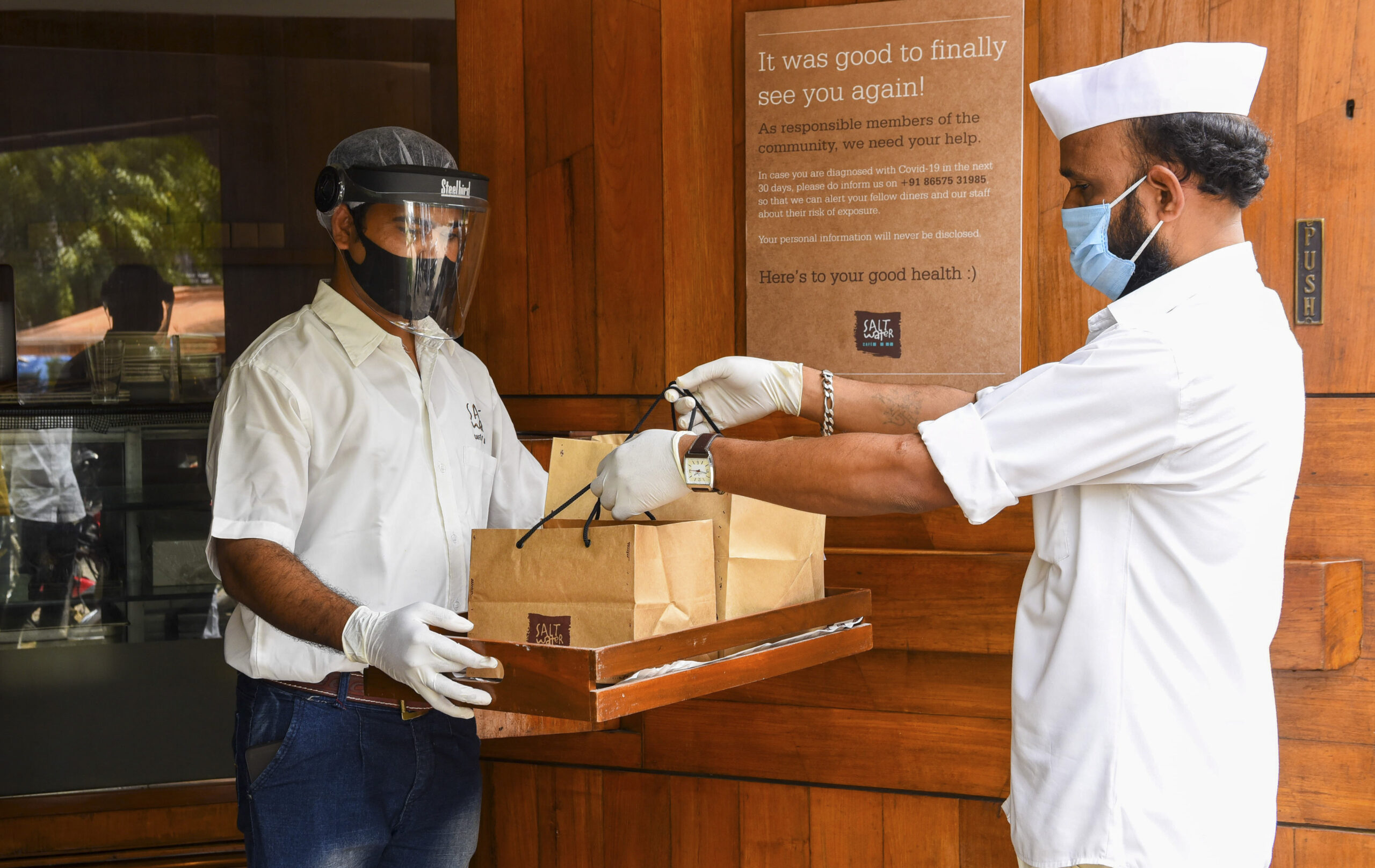 A second lockdown to counter India’s ferocious second wave of Covid suspended train travel, and many offices are still in work-from-home mode. This left many dabbawalas unemployed and in precarious financial stress. (Impresario Handmade Restaurants)

NEW DELHI — Before the pandemic, many Mumbai office-goers could enjoy fresh, home-cooked food in the midst of a busy workday, thanks to the “dabbawalas” or the carriers of tiffins.

Clad in spotless whites with a traditional Gandhi cap perched on their heads, an army of around 5,000 dabbawalas deliver food to almost 200,000 workers in the city from their homes at 1 p.m. sharp. The tradition started over 130 years ago.

These days, however, the sight of the tiffin man, charging around the city streets with his precious cargo, is rare.

A second lockdown to counter India’s ferocious second wave of Covid-19 suspended train travel, and many offices are still in work-from-home mode.

This left many dabbawalas unemployed and in precarious financial stress.

Kailash Shinde, 42, who had been delivering tiffins on the Borivali-Andheri-Bandra train route for the past 25 years, was forced to go back to his village in Pune district in western Maharashtra last year, during the first lockdown.

“For the first 15 days, we lived off the largesse of my brother who is a farmer in the region,” Shinde told Zenger News.

“But he is a man of limited means and could not sustain us beyond a point. I pawned my wife’s jewelry, and when that money dried up, we worked as farm labor for about INR 400 [$5.5] a day. We decided to return to Mumbai in October as we heard things were slowly going back to normal.”

Upon his return, the father of two found that there were few takers for his services, with many of his former clients were unemployed themselves.

“Life is tough. We have to pay about a year’s pending rent to our landlord, and there are tuition fees to be paid.”

But better times could be around the corner if an innovative scheme by Mumbai restaurateur Riyaaz Amlani takes off.

Amlani, the chief executive and managing director of Impresario Handmade Restaurants, which owns and runs 57 restaurants in 16 cities across India, has tied up with the Nutan Mumbai Tiffin Box Suppliers Trust. This charitable organization looks after the welfare of dabbawalas.

The restaurateur has roped in some of their members to do home deliveries for three of his Mumbai restaurants. Shinde is one of them.

“While restaurants have been devastated by the lockdowns and subsequent drop in revenue over the past year, Mumbai’s dabbawalas, the original backbone of Mumbai’s food delivery system, have been tragically out of jobs,” Amlani told Zenger News.

“Both entities have now come together in this pilot project to form a symbiotic partnership to empower and enable each other over the next few months.”

“We reached out to the dabbawalas association to zero in on several of them in Mumbai who will service direct delivery orders received on Impresario’s tech-enabled platforms for brands like SOCIAL, Smoke House Deli, and Salt Water Café.”

Amlani hopes to continue the association in phases over the next few months, each employing more dabbawalas and strengthening the partnership.

While the shortlisted dabbawalas had to be trained in restaurant delivery, Amlani is relying on their famed competence to get the job done.

With a unique system of color and alpha-numeric coding that ensures tiffins never get mixed up, the efficiency of the dabbawala system of delivery is legendary.

British tycoon Richard Branson, Prince Charles, and former US Commerce Secretary Gary Locke have famously spent time with the dabbawalas trying to understand the mystery of their near-perfect delivery system.

The more significant challenge for the dabbawalas lies in bringing themselves up to speed with the technical nitty-gritty of negotiating an online delivery platform.

“The majority of our dabbawalas are uneducated and come from a rural background,” Ulhas Shantaram Muke, president of the Nutan Mumbai Tiffin Box Suppliers Charity Trust, told Zenger News.

“Many of them were hesitant about using the tech platform. However, Impresario has simplified the process and trained our boys, who have quickly adapted to the new processes. Now they have no problem picking up the food from the restaurants and delivering them to the correct addresses on time.”

“It’s a great initiative that will benefit our members who have been hit hard by the pandemic. The money they’ll be earning is almost commensurate with what they were taking home as regular dabbawalas,” said Muke.

“Other restaurateurs have also called me up to inquire if we could start dabba deliveries for their outlets. However, we will only be able to decide on this after the association has a meeting and decides on the way forward.”

A Mumbai Dabbawalla app is under construction and the association is hoping that it can go live this month.

“Customers will be able to book simple tiffins on our app,” said Muke. “We will cook the meals at our base kitchen and send it out for delivery with our dabbawallas. We have asked for a user-friendly app interface so that we have no difficulty in operating it.”

While Amlani’s motives are altruistic, the restaurateur would also be looking to build a delivery fleet of his own and reduce his dependence on food delivery aggregators such as Swiggy and Zomato.

Amlani has been at the forefront of the #OrderDirect movement on social media that seeks to bypass these aggregators and build direct relationships with customers.

“We have been one of the first to launch our delivery platform in partnership with DotPe [a commerce and payments gateway] and promote direct ordering,” said Amlani.

“We want to build direct relationships with customers. We are making it convenient and safe for customers to order through our tech-enabled platform, thereby eliminating third-party aggregators. Consumers are moving away from offer-led discovery models to brands they can trust. We have seen a 300 percent rise in direct orders last month.”

#OrderDirect, however, is still a drop in the ocean where aggregator platforms are servicing the bulk of delivery of orders.

“We are paying around 42 percent to aggregators for discovery, delivery, and discounts. When we deliver directly, the margin is much better and the average order value 2x to 3x higher.”

The National Restaurant Association of India recently held a “boot camp” (where Amlani was also a speaker) to handhold restaurateurs through the direct ordering process, enable payment gateways, and reach audiences through platforms like Google My Business.

“This will hopefully change the contours of this trade and benefit tens of thousands of business owners rather than a handful of digital giants.”