Pedro Castillo, a leftist union leader, leads in polls over Keiko Fujimori, the daughter of a right-wing authoritarian. 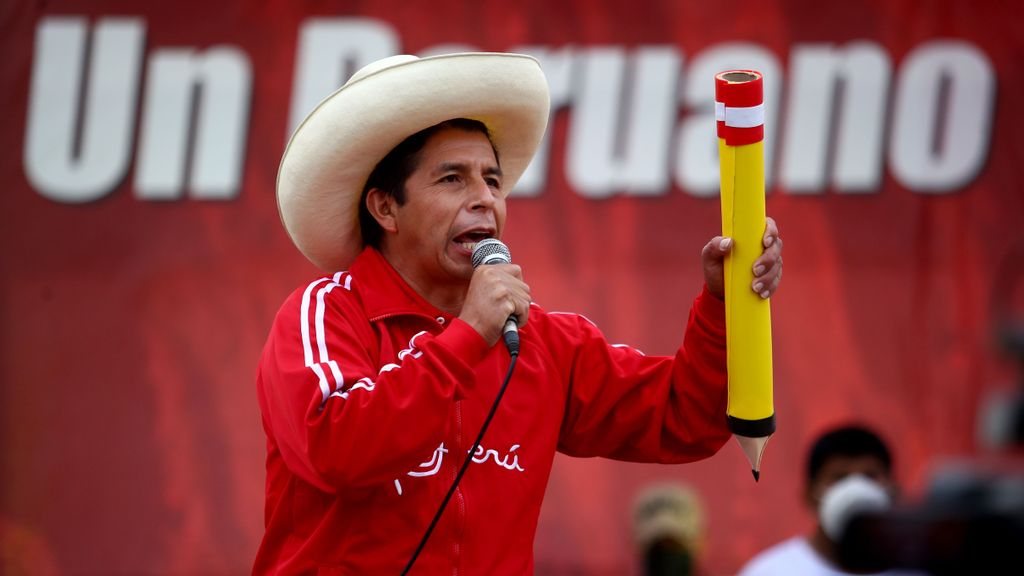 CARACAS, Venezuela — In the first electoral round in Peru, no candidate reached 15 percent in the polls. With an unprecedented political crisis ongoing since 2017, the almost unknown Pedro Castillo, born in Tacabamba, won first place with the Peru Libre party with an openly Marxist ideology.

While Castillo’s rise alarmed the political right in Peru and Latin America, his opponent does not inspire much enthusiasm either.

Keiko Fujimori, born in Lima, is the daughter of Alberto Fujimori, Peru’s president from 1990 to 2000. Many considered him a dictator, and he is currently serving a 25-year prison sentence for two killings by the military during his term. He has also been convicted of embezzlement, and currently faces charges in connection with additional killings as well as his role in a government program through which indigenous women say they were forcibly sterilized.

This is Keiko Fujimori’s third consecutive run for president; she previously ran for the office in 2011 and 2016.

In the last four years, Peru has seen four presidents and two legislatures. This crisis has weakened almost all political leaders, but Keiko Fujimori retained enough support to reach the final ballot.

“During the first months of the first round, she maintained a much lower profile than other right-wing candidates, such as López Aliaga or Hernando de Soto, which is perhaps why she went unnoticed,” said Macarena Costa Checa, a Peruvian political scientist.

Keiko Fujimori is political heir to her father. She has also been imprisoned on money laundering charges and has been linked to Odebrecht, a Brazilian construction company that engaged in corrupt practices for decades.

“Some issues piled up leading us where we are. First, there were several right-wing candidates. And none of those managed to become the [main] right-wing candidate. … On the contrary, the vote was fragmented into miniature candidates, creating a situation in which Keiko Fujimori’s hard [reliable] vote, which ended up being around 13 percent, was enough to get her to the second round,” said Costa Checa.

Castillo achieved a surprising victory after rising unexpectedly in the last week. His candidacy seems to answer those who seek economic change, but not social transformation.

“Faced with a long-time politician like Yonhy Lescano and a progressive politician like Verónika Mendoza, Pedro Castillo managed to connect at the end of the first round with the voters that reject ‘traditional’ politicians, leaning towards the left in the economic realm, but very conservative socially, opposing issues like the legalization of abortion and equal marriage,” said Ale Costa, the economics curator of the Reading Committee.

“His slogan, ‘No more poor [people] in a rich country,’ is a powerful message for Peruvians who feel that they have not benefited from the good results of the Peruvian economy and blame this on its model, when there are other problems, such as public spending efficiency and excessive informality, that must be solved and do not require a constitutional change,” Costa said.

Some see Castillo’s stance on the economy as radical, and that led to unexpected support on Fujimori’s side. His most significant champion has been Mario Vargas Llosa, a Nobel laureate in literature. The writer ran for president in 1990 but lost to Alberto Fujimori. After that election, Peru endured a decade of authoritarian rule.

“There is still a lot of reluctance to vote for Keiko Fujimori. I understand it. However, in this election, I am going to vote and request my fellow Peruvians to vote for her,” said the novelist in Arequipa, Peru’s second-largest city, in a ceremony where the candidate attended.

Peruvians believe “that two evils have reached the second round, and the most influential actors end up supporting one candidate or the other,” said political scientist Mauricio Zavaleta, who recalls that in previous campaigns, it was Keiko Fujimori’s opponents who received such support.

“This time, it is the other way around. Many have bet on Keiko Fujimori, including Mario Vargas Llosa, who has been a staunch opponent of Fujimorism for more than 30 years,” said Zavaleta, who believes the candidate has not benefited from this support. “Voters say that what we have seen is a rush to support her candidacy mainly to reject Pedro Castillo’s proposals. [This happens] particularly among the elites,” he said.

In contrast, Castillo has wanted to separate himself from politicians such as Nicolás Maduro, whom he publicly asked not to intervene in the affairs of Peru.

“He has sought to dissociate himself, but his big problem is that he is still related to Vladimir Cerrón [former governor of Junín and founder of the Perú Libre party]. In addition to being convicted of corruption, Cerrón is an admirer of authoritarianism in other parts of the region, particularly in Venezuela,” said Zavaleta, explaining that Castillo’s connection with Cerrón “makes his commitments unreliable to a large part of the voters.”

From both camps, there is fear for what the other candidate represents.

In any case, Peru is not able to implement significant macroeconomic changes in the short term.

“Whoever takes the reins of the country during the next five years will have the challenge of facing high demands from the population, which would translate into higher public spending, while fiscal savings were almost exhausted by the pandemic,” Costa said. She points out that Peru’s ratio of debt to gross domestic product is relatively low compared to other countries in the region, but the tax rate is about 13 percent, which does not leave much room to take on debt.

“But perhaps the main challenge will be to promote the creation of quality formal employment so that more Peruvians can earn an income that allows them to cover their family’s expenses and reverse what is perhaps the most dramatic legacy of the pandemic: that monetary poverty [rate] has skyrocketed to more than 30 percent in 2020,” said Costa.

The second presidential round will take place on Sunday, June 6. Peru is the fifth most populous country in Latin America, with 32 million people, 25 million of whom are eligible to vote.

Regardless of the winner, the great triumph for Peru would be to achieve the political stability that the new president needs to remain in office through 2026.