General Edward Katumba Wamala was wounded after attackers on motorcycles sprayed bullets at his vehicle. 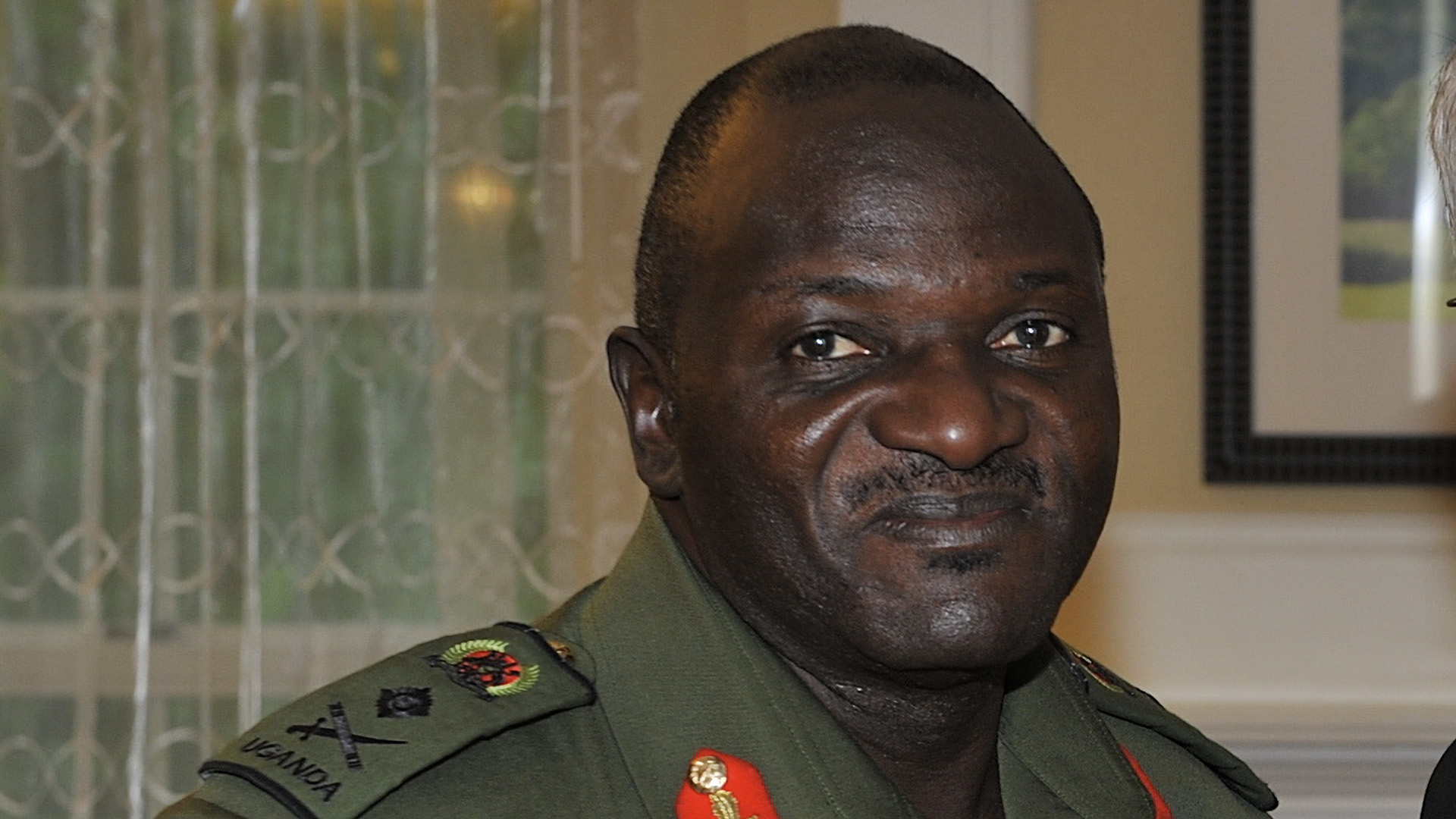 In a widely circulated tweet of Dec. 19, 2017, General Edward Katumba Wamala dared people who wished to attack him to find him at home. (U.S. Army Southern European Task Force, Africa/Flickr.com/(CC BY 2.0))

KAMPALA, Uganda — On the morning of June 1, shooters ambushed Uganda’s minister of Works and Transport and former Army commander General Edward Katumba Wamala’s convoy near his home in the capital Kampala, killing his daughter and driver and injuring him.

The statements released by both police and the army said four assailants on two motorcycles with hidden number plates trailed Wamala from his home in Kampala for 4 kilometers (2.5 miles) before spraying his vehicle with bullets soon before 9 a.m.

Wamala traveled with his daughter, Brenda Nantogo, 26, who had just returned to the country after completing her Master’s degree in the United States.

Others with him in the car were his driver, Haruna Kayondo, and bodyguard, Khalid Koboyoit. 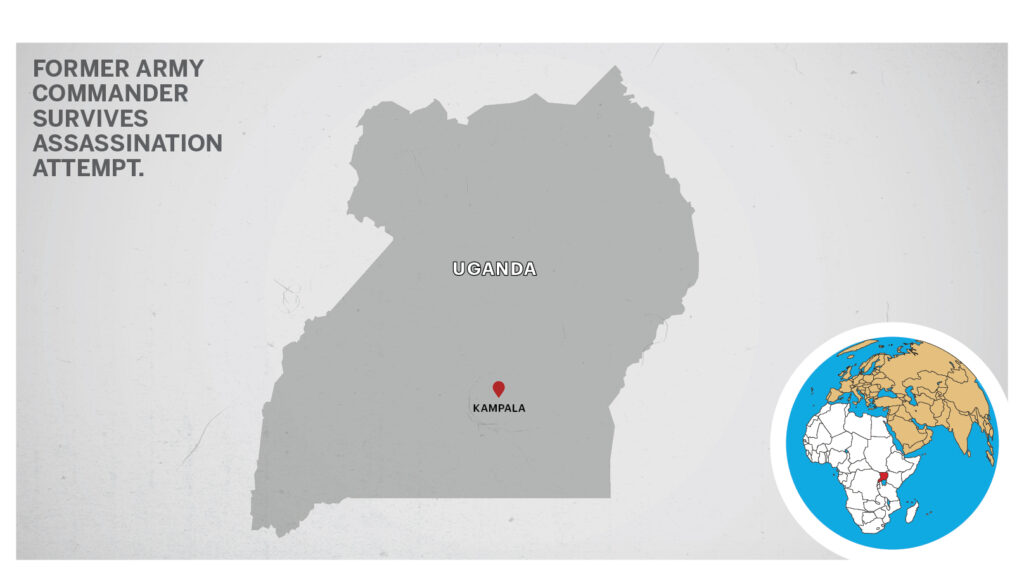 “This is the first serious shooting in the year, and we assume it was planned rather than random.”

Military spokeswoman, Brigadier Flavia Byekwaso, told the press shortly after the attack that “General Katumba Wamala was shot in the arm, his daughter and the driver have died on the spot.”

In several statements posted on Twitter, President Yoweri Kaguta Museveni said: “The pigs who do not value life shot at General Katumba killed his daughter and driver and injured him. Condolences on the loss of the two Ugandans. I talked to General Katumba twice on the phone. He is being well-managed.”

In another statement, the President said, “Authorities already have clues about the perpetrators. As we have in the past, we will defeat the criminals.”

Museveni also blamed Katumba’s bodyguard, Koboyoit, who survived with no injuries, for not shooting the attackers.

“The bodyguard should not have shot in the air. He should have shot to kill. We could be having a dead terrorist instead of scaring away the terrorists. His shooting saved General Katumba by scaring the criminals away,” he said on Twitter.

Eyewitnesses at the scene told Zenger News that unknown assailants on motorcycles approached the minister’s car and fired at least seven shots.

In a video addressed to his children from his hospital bed, Wamala said he is no longer in danger.

“I’ve survived. Brenda is no longer with us. It’s all part of God’s plan. I adore you all. Please keep mummy in your prayers. Please pray for mummy; she’s in a terrible, awful state.”

Police and the military officers were at the shooting scene collecting forensic samples, including spent bullet cartridges.

The attack’s motive is not yet known, but Wamala might have directed killers to his home.

In a widely circulated tweet of Dec. 19, 2017, he dared people who wished to attack him to find him at home.

“My residence is plot 11 Lugogo Channel and I have no guards,” Wamala said on Twitter in response. “My vehicle number is UG 1626W if he wants to use Kaweesi style. He doesn’t have to wait for a change of government.”

However, Francis Zaake said he had long forgiven Wamala.

“I moved on and forgave him for what he did,” he told Zenger News.

“Mistakes happen. Nothing he did in the past justifies what was done to him and his family. We may oppose the regime, but we are not vindictive people.”

Several attempts by Zenger News to reach Otto for comments were unsuccessful.

Wamala’s assassination attempt is the latest high-profile shootings witnessed in this East African country that has seen similar attacks recently.

In June 2018, Abiriga Ibrahim Yusuf Abdalla, a former military officer and a senior member of Museveni’s National Resistance Movement ruling party, and his bodyguard were assassinated similarly near his home in Kawanda, the outskirts of Kampala.

He was a Member of Parliament for Arua Municipality Constituency from 2016-2018.

In March 2017, Ugandan police spokesman Andrew Felix Kaweesi was shot and killed by four masked gunmen on two motorcycles near the site of the latest attack on Wamala.

In November 2016, assailants moving on a motorcycle trailed Major Muhammad Kiggundu, a soldier with Uganda People’s Defence Force, and fired more than 20 bullets into his car, killing him and his bodyguard outside a Kampala suburb.

He was a member of the rebel Allied Democratic Forces, which he denounced before joining the national army.

In March 2015, Joan Namazi Kagezi, an assistant director of public prosecution, was shot dead by men on motorcycles as she drove home in the evening with her children.

She was the head of the International Criminal Division in Uganda’s Ministry of Justice and Constitutional Affairs. She was killed as she was buying vegetables by the roadside in Kampala.

At the time of her death, she was leading the prosecution of 12 persons accused of being involved in the 2010 Kampala bombings, which killed 79 people. Al-Shabaab militants claimed responsibility for the incident.

Following the killings, a series of high-profile attempts by motorcycle-riding assassins, in 2019, the government erected CCTV on major roads in Kampala and other large cities, hoping to capture major crimes on video.

However, many Ugandans complain that the CCTV network has failed to assist police in solving several murders involving opposition activists and even ordinary Ugandans.

“Our government did not plan for the installation of these CCTV cameras,” Wakama Sam, an expert in city planning and development, told Zenger News.

“I doubt if some of these cameras work. We have had cases where people get killed near a CCTV camera, and police don’t show the public how the killers did it.”