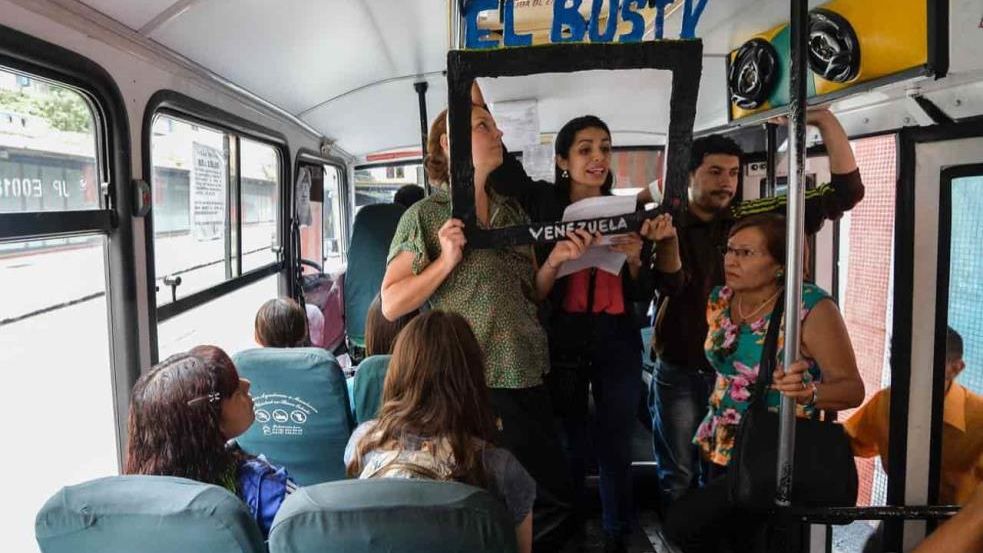 The journalists of El Bus TV share information on buses, as well as in neighborhood houses. (La Silla Rota)

“Hey, you can’t rip that off. It’s information!” A shop assistant in a popular neighborhood in Caracas tried to prevent a young man from removing a piece of paper from the wall. The young man said, “Sir, I’m a reporter. I am just changing the flip chart for one with new information.”

A group of young people in Venezuela have used sheets of paper, markers and candles to practice journalism for the last four years as part of El Bus TV. The project was born on May 27, 2017, after a hundred people died in one of Caracas’ most violent months.

“At that time, social media platforms were packed with obituaries reminding of the young Venezuelans who, during four months of protests, were killed at the hands of the state’s security forces,” said Laura Helena Castillo, El Bus TV’s director.

At the Lugar Común bookstore — which closed its doors in 2018 due to the crisis — Castillo met with a group of scholars, journalists and artists to discuss national politics and seek ways to rebuild Venezuela’s torn social fabric.

Castillo met Claudia Lizardo there. Lizardo had the idea of organizing an informative performance with young people. The project would consist of reading news through a wooden frame representing the television box.

Back in 2017, the Venezuelan media did not cover many stories. “El Universal” and “Últimas Noticias” newspapers as well as the Globo Visión network stopped covering the protests in real time.

The web was not an option for Venezuelans who wanted to remain informed, as less than 60 percent of the country’s population had Internet access then. Throughout this year, power outages have disconnected the metropolitan areas from the rest of the world for more than eight hours at a time.

“I was on duty at ‘El Nacional’ the night of Sunday, May 27, 2007, and I had to write the story about the screen going black and the Simón Bolívar orchestra launching the new state channel,” said Castillo.

“A decade later, I was getting on a bus to read El Bus TV’s first news story, which was ‘Today marks ten years since Radio Caracas Televisión’s last broadcast,’” she said.

From that moment, every news performance on El Bus TV ends with the closing sentence of Radio Caracas Televisión’s nightly news program: “We will continue to report.”

Reinventing themselves amid the pandemic

El Bus TV’s project had to transform itself when the COVID-19 pandemic hit. Instead of reading the news on the country’s bus routes, the young reporters created flipcharts. These sheets of paper had news stories usually written in color markers and divided by sections. The project’s journalists post them at bus stops, outside businesses and in the entrances to multifamily residential buildings.

The virus is not the only challenge that the project’s young reporters face. Alejandro Herrera, a journalism student at the University of Los Andes and a reporter for El Bus TV, said that some of his colleagues used candles to write their flipcharts on the long days without power and resorted to the Internet connection on their cell phones to gather and verify information.

“El Bus TV was born amid the state’s censorship attitudes towards journalism; it grew in this climate. I feel super happy to be part of a project like this in Venezuela. Despite censorship, we are a group of young people who do our job amid so much news silence, so many blocked channels,” he said.

The Inter-American Press Association (IAPA) has repeatedly warned about the seriousness of Venezuela’s war on the press. For more than a decade, the organization has pointed out a freedom-of-expression crisis in the country.

The most recent event is the political embargo against “El Nacional” newspaper. The IAPA condemned “the government reprisal against one of the few independent media that remain in the country which survive despite the repressive policy of the government.”

At the request of the neighbors, who already identify the reporters from their neighborhoods, El Bus TV’s journalists have organized news conversations in houses. They usually read the news from a window or balcony in a multifamily residence, and people listen from the outside. They even make coffee and sandwiches for the informative gathering.

“It is, as Florantonia Singer [a reporter for ‘El País’ and a contributor to El Bus TV] says, ‘close-contact journalism.’ It reaches your home. Community members can hardly ignore journalism when it reaches their windows,” Castillo said.

The journalists of El Bus TV are not seeking followers on social media or hoping for more clicks on a webpage. Neither do they dream of international journalism awards. All they want is to continue making an impact on their audience with local news.

Their goals are simple: that Venezuelans learn the essentials about vaccination in their country — Nicolás Maduro’s government has not reported the brand of vaccines the government has acquired — and that women find tools for fighting domestic violence.

“Unfortunately, politics have polarized Venezuela. When Venezuelans hear that you are on neither side, when you do journalism, they are surprised. Once, they applauded me when I finished reading the news. But reporters do not go out on the street looking for applause; they just go out to do their job,” said Herrera.

«Previous Post
The Other Pandemic Hitting The World: Suicides »Next Post
Mexican Scholarships Save Students From Becoming Dropouts