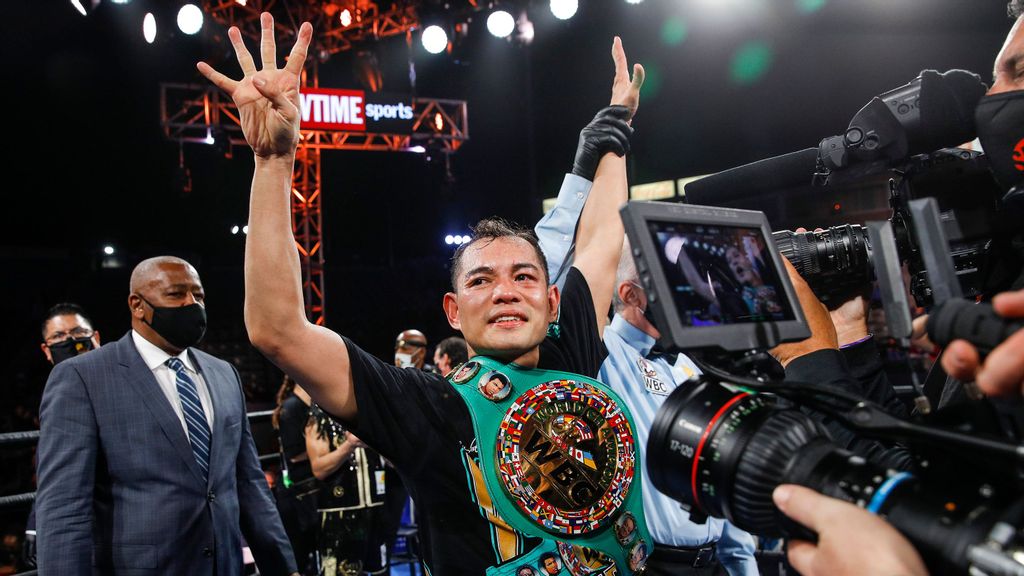 Nonito Donaire celebrates his win over Nordine Oubaali on May 29. (Esther Lin/SHOWTIME)

CARSON, Calif. — Nonito Donaire made boxing history with a fourth-round KO win over defending titleholder Nordine Oubaali on May 29, making him the oldest WBC bantamweight champion and one of a very few fighters to win a world title over three different decades.

“The king is back!” Donaire said to the crowd after becoming a world champion for the ninth time. He broke his own record in the 118-pound division, when, at age 35, he defeated Ryan Burnett in 2018. Burnett was forced to leave the fight in the fourth round due to a back injury.

Donaire, who turns 39 in November, said he feels faster and stronger than ever. His power was evident during the brief fight. After a feeling-out round in the first, Donaire started to set up his opponent. He knocked him down twice in the third before finishing him in the fourth. Donaire’s staple, a powerful left hook, was the difference-maker, and the referee waved off the contest after Oubaali was dropped at 1:52 of round four.

Donaire, the “Filipino Flash,” came into the fight nearly a 2–1 underdog on most sports books against the undefeated Oubaali, 34. Oubaali, one of 18 children born in France to a coal-mining family, was attempting his fourth defense of the title he won against Rau’shee Warren in 2019.

Oubaali showed flashes of brilliance and grit, but the experience gap was notable. While Oubaali was twice an Olympian for France, this fight was his 18th as a professional. It was Donaire’s 20th world title fight.

“Nordine came from a very tough background. He never had any real support. He did everything on his own, basically. No excuses. Nonito Donaire is a legend,” said actor Saïd Taghmaoui who attended the fight. Taghmaoui praised Donaire for being ”well-prepared mentally and physically for the fight.”

Taghamoui, himself a former amateur boxer in France, was joined by a number of French reporters who covered the fight in Carson, California. Prior to his loss, Oubaali was the only world champion of Arab heritage and one of only two from France.

“Oubaali had more success when he was boxing on the outside,” said Souleymane Cissokho, the WBA Intercontinental super-welterweight titleholder and a close friend of Oubaali’s. He attended the fight as an analyst for French TV.

“Donaire was incredible tonight, and his experience showed. He has a very impressive left hook.”

The event, broadcast on Showtime network, also featured entertaining undercard bouts in the junior welterweight (140 pound) division. Subriel Matias of the Dominican Republic defeated Batyrzhan Jukembayev of Kazakhstan via an eighth-round knockout. It was Matias’s second straight stoppage win over an undefeated fighter.

Gary Antuanne Russell is on a trajectory for a world championship fight, and in the aftermath of his victory over the weekend, called out former four-division world champion Adrian Broner.

But most of the attention was on Donaire, who reflected a Zen-like calm at the press conference after his victory, even referencing Master Yoda from “Star Wars.”

Just a few months ago, Donaire’s career looked far different, when all fighters were derailed by the pandemic.  The win was Donaire’s first fight since facing Naoya Inoue on Nov. 7, 2019, when Inoue battled back from a broken eye socket and beat Donaire by judges’ decision. It was regarded by many as one of the most competitive fights that year. Many thought Donaire would not recover from his sixth loss as a professional fighter.

“The whole year-and-a-half [layoff] was definitely a blessing. I was able to heal,” he said. “I had head movement; I had power and speed. I was very patient because I was able to take time off and recover.”

Donaire’s promotional manager Richard Schaefer, called his fighter’s upset victory “sensational and unbelievable.” During the press conference, Schaefer recalled former middleweight champion Bernard Hopkins, who fought until the age of 50, suggesting Donaire might do the same.

Japanese slugger Inoue faces Michael Dasmarinas of the Philippines next month in a title defense of the four bantamweight titles he holds. Donaire said he will likely attend that fight as he presses for a rematch against his rival.

While a rematch with Inoue is the goal, Donaire also sees other potential big paydays. He will be closely watching the August battle between WBO bantamweight titlist John Riel Casimero of the Philippines and former 122-pound King Guillermo Rigondeaux of Cuba. A rematch against Rigondeaux, who beat Donaire in 2013 in a potential reunification fight, would offer Donaire a chance to revenge a decision loss and add to his already illustrious career.

«Previous Post
‘I Am A Man’: The Musical Magic Of History And Tragedy»Next Post
Jonathan Bender’s Jump From High School To The NBA