Jonathan Bender’s Jump From High School To The NBA

The fifth pick in the 1999 draft spent 11 years in the pros. Now he's focused on being an entrepreneur.
By Percy Lovell Crawford June 2, 2021
Facebook
Twitter
Linkedin
Email 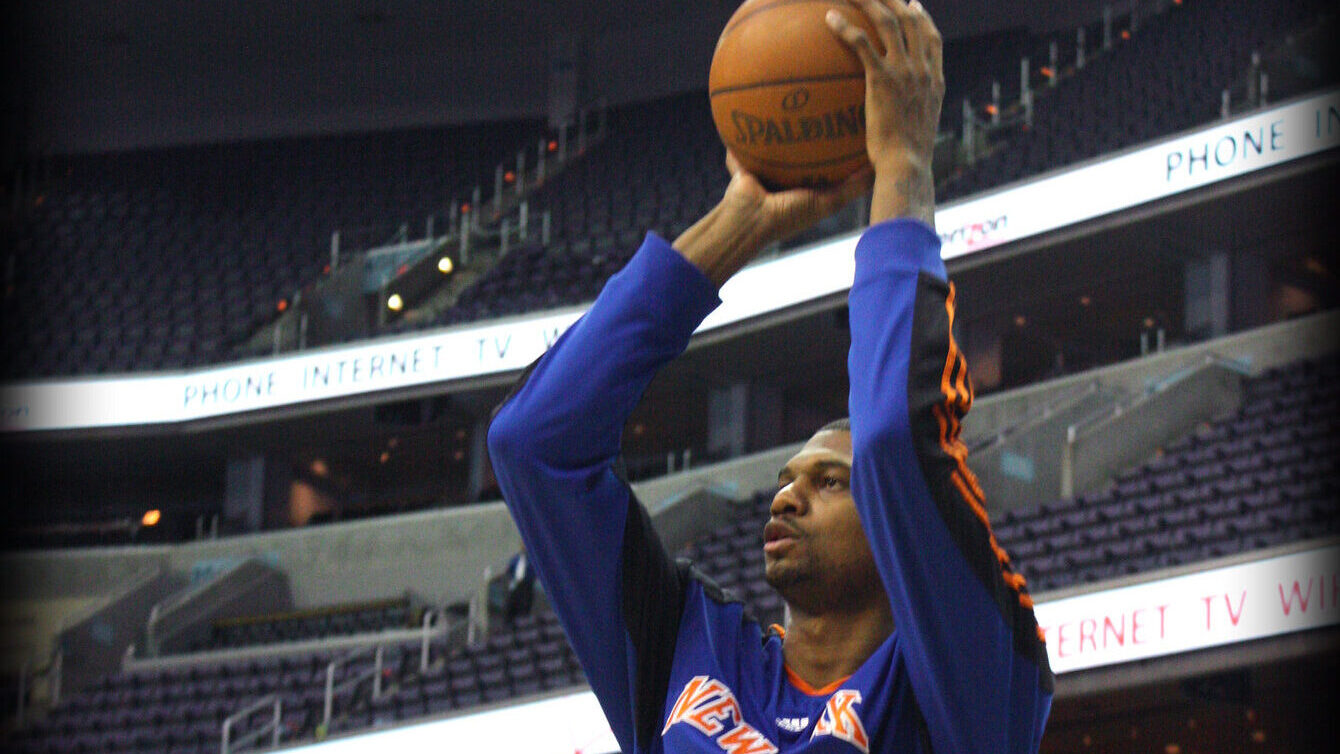 Jonathan Bender warms up for a game during his time with the New York Knicks. (truthaboutit/Flickr)

In a 2000 release, recording artist Nelly rapped: “I’m draftin’ ’em outta high school straight into the pros.” That was a reference to a then-growing trend among prep basketball stars: Bypassing college and entering the pro ranks as teenagers.

Just a year prior to Nelly’s release, Picayune, Mississippi, basketball star Jonathan Bender undertook his own version of those lyrics.

Although his commitment to Mississippi State proved to be a smokescreen to sidetrack the media, when Bender broke Michael Jordan’s McDonald’s All-American Games scoring record by netting 31 points, it solidified his decision to enter the NBA Draft. During his 11-year career, Bender would play for the Indiana Pacers and the New York Knicks before retiring in 2010, due to injuries.

Zenger News spoke to Bender, who sheds light on his decision to bypass college, discuss what he’s up to these days and much more.

Zenger: During the McDonald’s All-American Games, you broke Michael Jordan’s record of 30 points. Was that performance the final straw in making the decision to bypass college and enter the NBA Draft?

Bender: We planned to sign with the school [Mississippi State] just to back the media off a bit, but the plan was always to the destination [the NBA] as quickly as possible. By doing the workouts here and there and people seeing me, it was already chirps. But the McDonald’s game just put fuel to the fire. It lifted my stock and made it an absolute no-brainer.

Zenger: That game was loaded with talented high-school ballers. From a confidence standpoint, did that game make you realize you belonged in the upper echelon?

Bender: Nah. I credit being one of the toughest dudes out there. I had already played with grown men, and I knew about confidence. I had put in so much work to the point where I was ready to get out there with anybody. This was a top showcase; it was my time to go out there and show what I can do. I had to get it in, bro.

Zenger: You were the MVP of the McDonald’s game, Mr. Basketball USA, Mr. Basketball Mississippi, Parade All-American. At that point, which achievement meant the most to you?

Bender: The John Wooden Award, which is the MVP of the McDonald’s All-American Games. I’m not really a trophy guy. I’m partial to the Wooden one, because it has the values of success [written] on it. That stands out a little differently than someone holding a basketball looking like they are trying to make a move on the trophy.

Bender: I could’ve gone earlier in the draft. The Clippers were trying to take me, but my agent didn’t want me to go because everybody was too young. It was going to be a problem out there with all them young cats, man. So, we structured me to go to the Pacers, which was cool.

Zenger: As an 18-year-old, you went to a veteran Pacers team. Can you recall a player, if any, who took you under his wing?

Zenger: Your hometown, Picayune, Mississippi, is very small and very country. Not that Indianapolis is a huge market, but I’m sure you had to make some adjustments.

Bender: It was fine. Indianapolis is not like you’re going to some crazy city, but it was the biggest city I had lived in for a sustained period of time. It was freezing cold. I had never been in that type of cold environment. But my brother came up, as well as my agent, who was my father figure at the time. They both stayed with me my rookie season. They kept me a straight arrow.

I was able to get in there, get some work done, train and stay focused. And then it was good to have Al [Harrington] on the team. He was a year ahead of me coming out of high school. So, I had another high-school cat to kind of relate to. I couldn’t get into any of the clubs or any of that stuff. They tried to sneak me into the club. It was like, “Come on, man. We know him!”

Zenger: Not only were you a high pick, but you’re 6-foot-11. It’s kind of hard to sneak you anywhere.

Bender: Exactly. So, for a while it was just boring outside of training. It was a cool experience, but it was work.

Zenger: You don’t strike me as a guy that lives with regrets. Do you have any?

Bender: No! I don’t do that. I don’t dwell on things I can’t change or things that are meant to happen. Every step you take, whether you view it as good or bad, is all good. How can you have regrets? I’m a big faith guy, so I don’t question anything. I just go with it.

Zenger: There are videos that have surfaced that are calling you “the first KD.” Given your stature, your game, would you say it’s fair to say you were the first Kevin Durant and were before your time?

Bender: My game was probably before its time because when I came along, they didn’t know what to do with me. When I practiced, you saw a whole different version of me. The way that I performed in practice, I was able to get super comfortable. I can play that guard position, I can play 2, 3 and 4, and I even played the 1 a bit when “Zeke” [Isiah Thomas] was the coach. They kind of moved me around.

Zenger: Was there a player who you didn’t think much of, but when you played against them or saw them live, they really impressed you?

Bender: I would say it’s the opposite. You see some guys on TV and you think so highly of them, but when you get with them, their just humans. They’re just guys that get an opportunity and their confidence is on 10. They aren’t doing anything different I’ve been able to do in practice. For me, that’s a difficult question. Being almost 7-foot with shooting ability and athleticism, there’s not a lot that I haven’t seen.

Zenger: Do you feel like your skill set is better suited for today’s game of wide-open play and bigs handling the ball and shooting from range?

Bender: Today’s game is definitely a lot easier because of the rule changes. They embrace the big guy bringing the ball up the court like a guard. Putting a guy in a position and pushing him to do everything — to bring out his whole repertoire. Nowadays, if you’re 7-foot and you can’t shoot 3s, they’re going to teach you how to shoot 3s and teach you how to handle the ball and bring it up court. Back then, if you were tall, they just wanted you in the paint. If your game went beyond the paint, they raised an eyebrow. They didn’t know what to do with you. Today’s game is prime.

Zenger: Did you ever have a “wow” moment?

Bender: I guess meeting Mike [Jordan]. The first time I saw Mike, he didn’t look real to me.  I had to question that in my head, so that was probably my first “wow” moment.

Zenger: I’m not completely hands-on about how Picayune, Mississippi, has handled you, but do you feel like the town has done enough to honor your legacy?

Bender: To turn it around, I probably haven’t done much to honor Picayune, either. But you grow up, you move on, and you do your best. I really don’t look at getting honored. They want me to retire my jersey, but I don’t feel comfortable in those kinds of situations. You come to my house; you’re not going to see trophies everywhere. I got a Larry Bird autographed ball in my garage over with the other balls. It’s just out. My coach wants me to come down — “Come on, we want to retire your jersey and hang it in the rafters and have this ceremony.”

Bender: Yeah. But I think so little about sports in general now. I think more of educating somebody and helping them change their lives. I’ve been through the whole machine and the system, so I see everything. I see the incentives of doing certain things.

Zenger: What are you up to nowadays?

Bender: Just being me, brother. I got goals that I set, and I go for them. I’m a born entrepreneur. I’m in the digital marketing space, and it’s very freeing. I’ve been in that game for about eight years, and I’ve been in the product-development game for about 13 years. I love the idea of creating something from nothing. If I look back at my youth, everything I did was from an entrepreneurial spirit before I got into basketball.

I love making money. I don’t love money, but I love the ability to make it. That’s something most of us African Americans don’t have. We have the mindset of getting paid, but very few know how to make money. That’s a big difference. You have to know what you’re doing when it comes down to stats and paid advertising. That back door is never experienced or shown by us. I enjoy that.