App Urges Mexicans To Cast ‘A Useful Vote,’ The Party In Power Complains 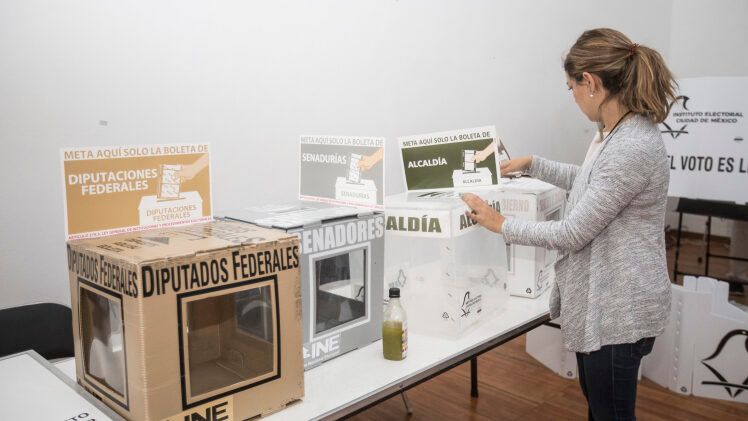 Mexico's midterm elections on June 6 could show what the population thinks of the president. An actuary and mathematician launched voto-util.mx, a platform that encourages people to vote for candidates who have a better chance of winning, rather than choosing their first option. (Alfredo Martinez/Getty Images)

Jhovana Castellanos wanted to cast a useful vote in Mexico’s June 6 election. So, she tried to use the app designed for this purpose. However, the process was complicated, and she felt suspicious.

“I tried to register, but the truth was it [the app] asked me for a lot of information … that I did not believe was necessary,” she said.

“I hesitated and decided it was not safe. Maybe it was a bit of ignorance on my part … but I was more concerned with data protection than casting my vote.”

The feeling of mistrust stands out in the scene prior to the June 6 election.

Three years later, Mexicans may try to find a counterweight and balance the branches of power in the midterm election. Many joined get-out-the-vote efforts, hoping to make it clear for Mexicans that it is important to exercise their right.

Businessmen and activists have come together to call for a “useful vote.” Some have even developed platforms that provide citizens with more information on how to exercise it.

They describe the “useful vote” as a strategic vote in favor of a party that is not necessarily the voter’s favorite, but has a greater chance of defeating another whose victory is not desired. More than a vote in favor, it is a vote against options that some voters consider worse.

Arturo Erdely, an actuary and doctor in mathematical sciences at Mexico’s National Autonomous University, developed the platform voto-util.mx that helps the voter cast a strategic vote.

“The useful vote is a strategic vote that seeks a specific result, in this case, finding a balance of power through the Chamber of Deputies and that the [parties of the] executive and legislative branches are not the same,” he said.

Morena condemned the site and those who paid for its development on April 15. The party claimed the tool incurs an improper free speech exercise and violates the election’s fairness.

“The Morena party reported it to the National Electoral Institute (INE), considering that it violated electoral regulations. But after analyzing the issue, the agency found no violations of electoral laws or regulations. The methodology presented is completely transparent, based on public information from the INE,” said Erdely.

The app asks the state where users will cast their vote and the section number in their national election card. It uses this information to provide data that allows the voter to know who is leading the polls and cast “a useful vote.”

Aida Calderón, who lives in Mexico City, is ready to cast her vote and is clear who to vote for on June 6. Despite not having used the helpful-vote app, she said it is an essential tool regarding transparency and access to information.

“I know there are groups that have an agenda. However, it is good they develop this type of platform and the government allows it. It bears witness to the freedom of expression that still exists in the country. It is important to have information access to vote in a more thoughtful way and be sure of what we want for Mexico,” she said.

AMLO ran for president in 2006, 2012 and 2018, when he was finally elected. Throughout these years, he has been building a controversial persona, now attached to the Morena party. The June 6 election will confirm if his reputation can push the vote toward the party without his name on the ballot.