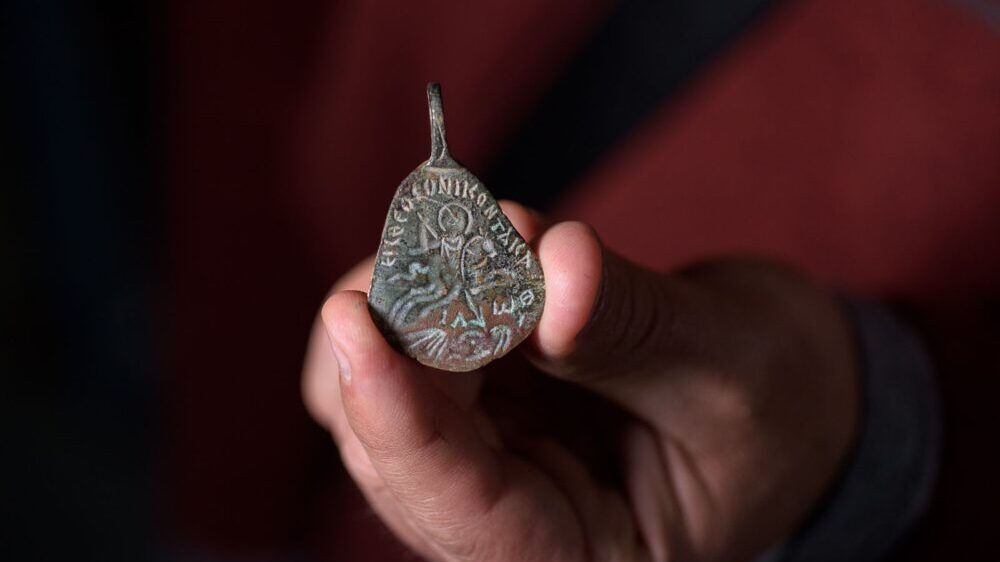 The front side of the pendant shows a galloping rider overcoming a demon and the Greek letters for the Jewish Divine Name. (Dafna Gazit/Israel Antiquities Authority)

An ancient bronze necklace pendant attesting to its owner’s fear of demons and the evil eye recently made its way to the Israel Antiquities Authority — 40 years after it was unearthed near the site of a Byzantine-era synagogue.

The amulet was originally found near the remains of the ancient Arbel synagogue by Tova Haviv, a nearby resident.

When she died, a family member brought it to the National Treasures Center at the IAA, where it was examined.

“The amulet is part of a group of fifth- to sixth-century C.E. amulets from the Levant that were probably produced in the Galilee and Lebanon,” explains Eitan Klein, deputy director of the Antiquities Theft Prevention Unit.

The front side of the pendant depicts a haloed rider on a galloping horse, thrusting a spear toward a female figure lying on her back. Engraved in a semicircle above the rider is a Greek inscription: “The One God who Conquers Evil.” Beneath the horse appears the Greek letters I A W Θ, which stand for the Jewish Divine Name (Yahweh, IHYH).

The reverse side shows the evil eye being pierced by arrows and a forked object and threatened by lions, a snake, a scorpion and a bird. On the top part of the scene appears the abbreviated Greek inscription for “One God.”