Experts say the statement could have been taken back under pressure and hints at a policy shift. 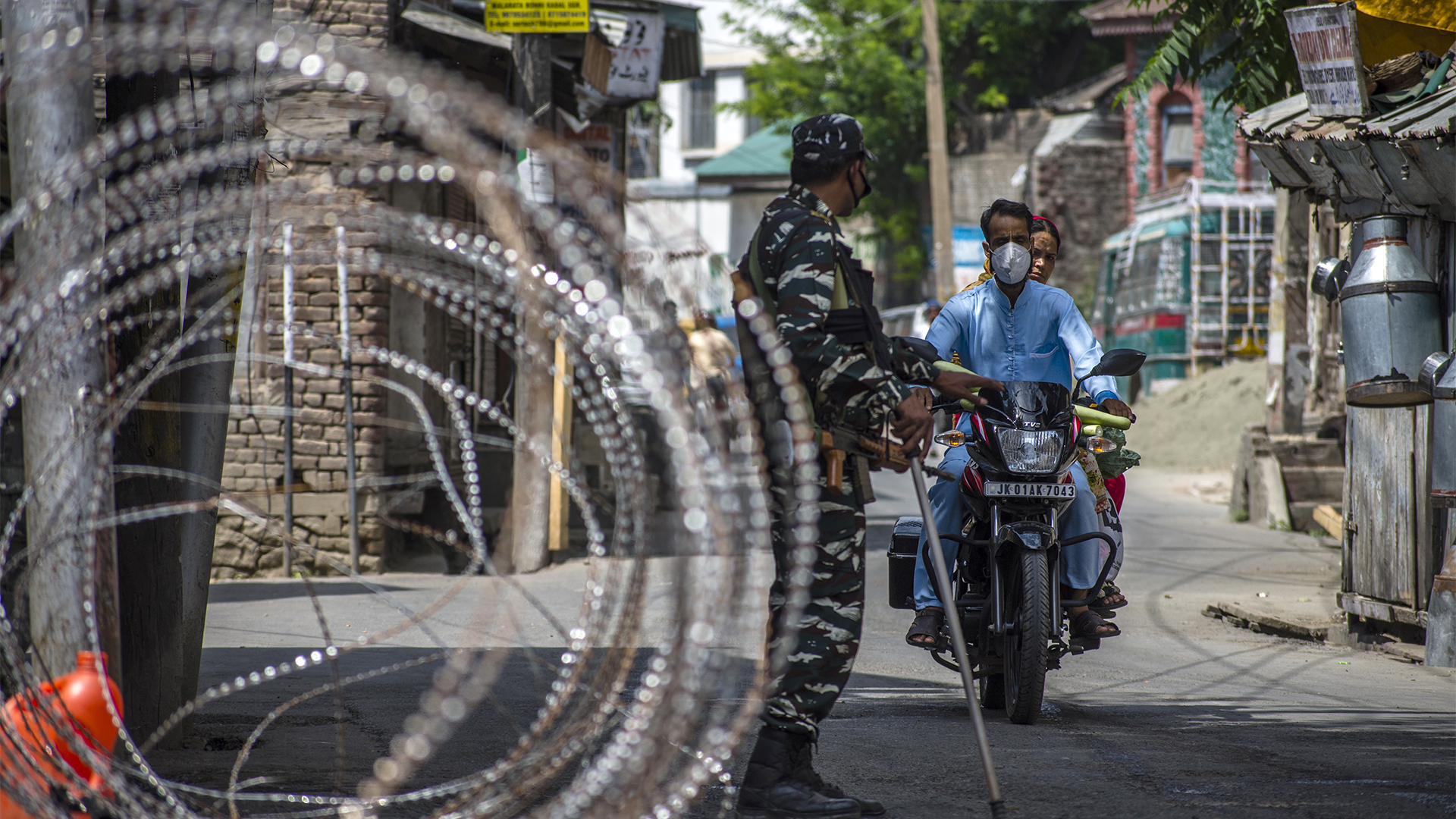 Pakistan admitted abrogation of Article 370 of the Indian Constitution, granting special laws and provisions to the states of Jammu and Kashmir, is “India’s internal matter”. (Yawar Nazir/Getty Images)

LAHORE, Pakistan — Pakistan has, for the first time, admitted the abrogation of Article 370 of the Indian Constitution, granting special laws and provisions to the mountainous states of Jammu and Kashmir, is “India’s internal matter”.

“The issue is between the people of Jammu and Kashmir and India,” Pakistan’s Foreign Minister Shah Mahmood Qureshi said in a TV interview earlier this month.

“The issue is being debated in Indian courts as many people there [in India] have challenged the revocation of Jammu and Kashmir’s special status.”

The Narendra Modi government abrogated Article 370 and Article 35 of the Indian Constitution in August 2019, stripping the region of special powers vested to them when they agreed to join India after the partition of the subcontinent in 1947.

Human rights activists and opposition leaders condemned the Modi government for unilaterally deciding without consulting local stakeholders, unleashing a blanket communication blockade in the region, cutting it off from the rest of the country and world, and violating the fundamental rights of the citizens.

When asked if Pakistan had any objection to India’s decision, Qureshi said: “A big segment of the Indian population now believes that India has lost more by revoking Kashmir’s autonomous status, be it Article 370 or Article 35A.”

This reorganization brought the region — a reason for dispute between India and its neighbors Pakistan and China — under the direct control of the Indian government.

While answering a question about any potential assurance that India might have given to Pakistan regarding the restoration of Jammu and Kashmir’s special status, Qureshi said: “There are outstanding issues between India and Pakistan that needs to be resolved, and the only way forward is dialogue.”

The statement from Qureshi and other senior leaders of the Pakistani policy-making cadres underscores that Islamabad may finally accept that forcing India into changing its policy in Jammu and Kashmir is a failed approach.

Article 370 allowed the erstwhile state of Jammu and Kashmir some degree of autonomy and freedom to make its laws regarding ownership of property and residency.

The region could bar people from outside the state from buying property or settling there. India’s current government says it changed the status to bring the state on the same footing as the rest of India.

“No unilateral step by the government of India can change this disputed status,” the statement notes, vowing to exercise all possible options to counter what Pakistan described as “illegal steps”.

Qureshi took to Twitter on May 9 to clarify his remarks.

“Jammu and Kashmir is an internationally recognized dispute on the UN Security Council agenda. Final settlement of the dispute lies in UNSC resolution calling for a free and impartial plebiscite under UN auspices,” he tweeted.

“Nothing about Jammu and Kashmir can be India’s internal matter,” he said.

Experts opine it is possible that his “clarification” was meant to satisfy the public and domestic Pakistani media.

“The clarification from him [Qureshi] is to dissuade the media and people from attacking the government,” Syed Ali Zia Jaffery, a research fellow at the Center for Security, Strategy and Policy Research, University of Lahore, told Zenger News.

After his U-turn, there have been reports saying that Pakistan’s powerful army chief, General Qamar Javed Bajwa, is willing to drop Pakistan’s demand that India reinstates Kashmir’s special status.

Decoding the shift in position

Some analysts opine that Pakistan’s stance to term India’s decision to end a constitutional provision that gave Jammu and Kashmir its own Constitution as part of an internationally recognized dispute may not exist anymore.

“This essentially shows Islamabad is not interested in the issue of Jammu and Kashmir as a make-or-break issue as far as the country’s relationship with India is concerned.”

Experts opine Pakistan was never interested in its much-talked-about policy of arranging a plebiscite in Kashmir in the first place.

“The fact of the matter is that Pakistan never wanted a plebiscite,” author B.L. Sharma writes in his book The Kashmir Story.

“Despite a plethora of statements from its leaders to the contrary, acceptance of a plebiscite by its government was insincere. All available evidence shows that it did everything in its power to prevent a plebiscite from being held.”

“India was the first to suggest a plebiscite as a peaceful method to resolve the Junagadh [a princely state under the British Raj] dispute with Pakistan. India made a similar offer to settle the Kashmir situation in 1947. The offer for the plebiscite was reaffirmed in 1948, and when the U.N. Commission suggested it, and India accepted the proposal,” Sharma notes.

The recent move highlights Pakistan’s readiness to bury its longstanding policy of resolving the Kashmir issue, a key condition for holding any talks with India.

Pakistan is demanding flexibility from India over Jammu and Kashmir’s special status because Pakistan’s public will not accept an agreement unless New Delhi offers something to Islamabad.

“Qureshi, in his TV interview, stated that the abrogation of Article 370 and Article 35A by India vitiated the environment between the countries,” Maria Amjad, an expert on Pakistan’s affairs at the University of Genoa, Italy, told Zenger News.

“Therefore, this time, India has to show flexibility to create a conducive environment. Otherwise, it will be difficult for Pakistan to make it look like a good deal.”

Pakistan is trying to improve the optics of the relations with its neighbor. In March, Pakistan’s Prime Minister Imran Khan permitted to open trade with India. However, the decision was put on hold by the country’s federal cabinet over concerns that India needed to review the abrogation.

“Why open trade with India if you are such a staunch supporter of the Kashmir cause?” asked Hassan. “I think it was the fear of public pressure and backlash that forced Pakistan into reviewing its decision.”

Some analysts argue the sense in Islamabad is that Pakistan has not achieved anything against India, despite its decades-long efforts to internalize the Kashmir dispute.

This sense was clear from Pakistan’s Army Chief’s recent address at the Islamabad Security Dialogue. He said it was time for India and Pakistan to “bury the past and move forward”.

For decades, Pakistan has faced India’s aggressive diplomacy globally and could not counter India’s political and diplomatic influence and leverage.

India’s missions, particularly in Europe and the United States, have kept those of Pakistan at bay when broadening outreach and gaining access to policy-making circles.

This fact was also recognized by Imran Khan’s address to his country’s diplomats earlier this month.

Rebuking Pakistani diplomats for not doing a good job, Khan asked them to learn from their Indian counterparts, whom he considered “more proactive”, providing “better services to their citizens”.

“Indian diplomats have done a lot in forging strategic ties with the United States, the European Union, and even the Middle East,” Hassan Khan, an independent analyst based in Islamabad, told Zenger News.

“In the Middle East, they specifically focused on Saudi Arabia and the Emiratis — Pakistan’s traditional allies — in the recent past,” Khan said. “As a global trade powerhouse, India’s economic diplomacy is way ahead of Pakistan if reality checks are taken into consideration.”

Khan said the kind of assistance and support India receives from its Western allies is unmatchable.

“This is where Pakistan lacks attentive focus despite its full cooperation on the Afghan Peace Process — a temporary partnership that won’t lead to any wonders of economic or diplomatic gains.”

It is too early to say if India will offer anything to Pakistan that Islamabad could consider a “conducive environment” to gain space domestically and kick-start trade and other cooperation with New Delhi.

However, Pakistan might have reached a point where it has accepted India’s global status as a major diplomatic power.

“War is not an option. It will be a mutual suicide if Pakistan and India go to war,” Qureshi said earlier.