As tensions rise, the Biden administration says it will focus the meeting on overlapping U.S.–Russian interests, and not disputes. 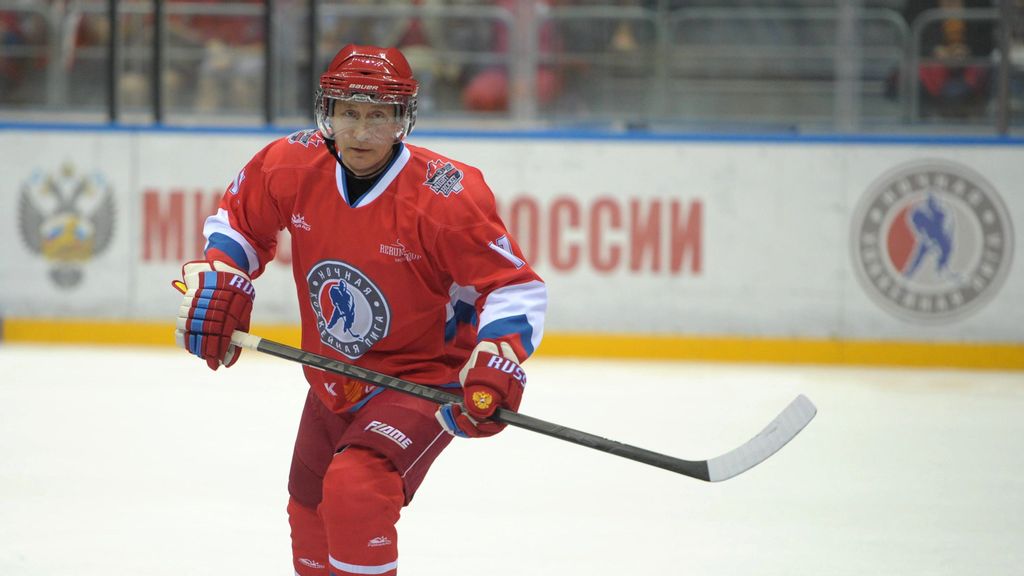 Russian President Vladimir Putin, who is known to cultivate a “tough guy” image, takes part in a Night Hockey League match at the Bolshoy Ice Dome in Sochi, Russia, on May 10. (Alexey Druzhinin/Sputnik)

When Presidents Joseph R. Biden Jr. and Vladimir V. Putin meet in the shadow of Mont Blanc on June 16, the chill will be palpable.

Biden will be the first president since Ronald Reagan to meet a Russian leader in Geneva, Switzerland — and also the first since Reagan to enter office expressing open hostility to the Kremlin.

Biden called Putin a “killer,” and upbraided him over human rights.

The drama of a Russian–American summit has traditionally made it a major diplomatic moment, particularly in Geneva, where Reagan and Mikhail Gorbachev started the process that led to the end of the Cold War.

But, foreign policy experts told Zenger News, expectations for this summit are lower.

“The Biden administration has sensibly set the goal of stable and predictable U.S.-Russia relations,” Steven Pifer, a senior fellow for the Brookings Institution’s Center on the United States and Europe, told Zenger News. “Given the current state of the relationship and adversarial Russian reactions, a reset would be too ambitious.”

The White House’s relationship with the Kremlin has worsened during the first few months of Biden’s presidency. Among other issues, ties have been strained by the SolarWinds cyberattack on U.S. government computer networks, Russia’s continued military provocations against Ukraine and occupation of Crimea, the recent arrest of a Belarusian journalist and the jailing of Russian opposition leader Alexei Navalny.

Nonetheless, the Biden administration has said it will focus the upcoming meeting — set against the famously neutral backdrop of Switzerland’s Mont Blanc — on areas in which the U.S. and Russia can find common ground.

“The leaders will discuss the full range of pressing issues, as we seek to restore predictability and stability to the U.S.–Russia relationship,” White House press secretary Jen Psaki said last week, adding that Biden plans to focus discussions with Putin on strategic stability, arms control, Ukraine and Belarus.

The face-to-face encounter will be part of Biden’s first international trip as U.S. president, which will include meetings with leaders of the European Union, a summit of the Group of Seven in the United Kingdom and a NATO summit in Brussels.

“This will be a very different meeting from the kind that Mr. Trump had with Mr. Putin. There is no indication that Mr. Trump did any serious preparation in advance; one can expect President Biden to be well-prepared in Geneva,” Pifer said.

“It is good that the meeting is taking place, but expectations should be kept modest.”

But though Biden says he seeks cooperation from Russia on fronts of overlapping interest, he has at the same time not shied away from confronting the Kremlin.

The U.S. recently levied sanctions against Russian companies and ships for their involvement in the construction of Nord Stream 2 — a natural gas pipeline that will connect Germany and Russia — amid long-running concerns about Germany’s energy reliance on Russia.

The move followed Biden’s decision last month to expel 10 Russian diplomats and sanction dozens of Russian companies and individuals over claims Russia launched the SolarWinds cyberattack and interfered in the 2020 U.S. election.

The Biden administration also announced sanctions against several Russian officials, businesses and entities in March over a nerve-agent attack on Navalny, the Russian opposition leader, and criticized the Kremlin for subsequently jailing him.

“Biden is the first American president since the end of the Cold War who has not come into office vowing to improve relations with Moscow,” A.J. Gawthorpe, history and international studies professor at Leiden University, told Zenger. “Each of his predecessors promised some sort of reset, but the reality under each has been steadily deteriorating relations.”

“At a time when the Biden administration is consumed with domestic matters, they’re not seeking any dramatic new departure in U.S.-Russian relations,” he added. “What they want most from Russia is a stable relationship with as little drama as possible.”

But the Biden–Putin relationship goes back years, and there has not been much love lost.

Putin was among the last European leaders to congratulate Biden on his 2020 election win, and Biden says he told Putin face-to-face in 2011 that he “has no soul.”

While on the campaign trail last year, then-candidate Biden called Russia “the biggest threat to America.”

Once in office, the president replied in the affirmative when asked during an interview if he believes Putin is a “killer,” leading the Kremlin to recall its ambassador to the U.S. for the first time in more than 20 years.

In his first call with Putin as president, Biden also claims to have said: “The days of the United States rolling over in the face of Russia’s aggressive actions … are over.”

Despite Biden’s warnings, Russia has continued its tug-of-war with Ukraine, from which it annexed Crimea in 2014, by violating a cease-fire last month and building up troops on the Ukraine–Russia border. Russia also began blocking some incoming flights from Western nations last week, days after Belarus forced the diversion of a Lithuania-bound plane in order to arrest opposition journalist Raman Pratasevich and his girlfriend.

Russia has also been building its nuclear arsenal since Trump withdrew from the Open Skies Treaty, which permitted surveillance flights by each nation over the other to ensure they were sticking to non-proliferation obligations. That move left the New START treaty as the only arms control treaty in place between the two countries.

While the Kremlin agreed to extend for five more years the New START treaty, which would have expired earlier this year, Russia already boasted in 2018 that it had developed nuclear weapons that could not be detected or intercepted by the U.S. if they were ever fired.

“By all indications President Joe Biden believes that Vladimir Putin’s Russia poses a serious threat to American interests. However, Biden realizes that it is even more important to talk with your adversaries than to your friends,” Cato Institute senior fellow Doug Bandow said.

“He likely hopes to create an open communication channel … which could be used to hopefully avoid, and if necessary, defuse, future confrontations or crises.”

News of the summit has been met with mixed opinions from U.S. officials and foreign leaders. German Chancellor Angela Merkel, for instance, welcomed the opportunity for Biden and Putin to meet, saying: “Diplomacy only has a chance if you talk to each other.”

The view is shared by some in America, too.

James Carafano, Heritage Foundation vice president for national security and foreign policy, told Zenger he did not expect anything major to come from the Geneva meeting.

“The Biden administration has essentially come in and ignored the last four years and just pulled out the Obama playbook … which is largely about disengagement,” Carafano said, adding that changing relations were, in the end, a two-way street. “If we want to have a different relationship with Russia, we’d need a different Putin, and we don’t have one.”